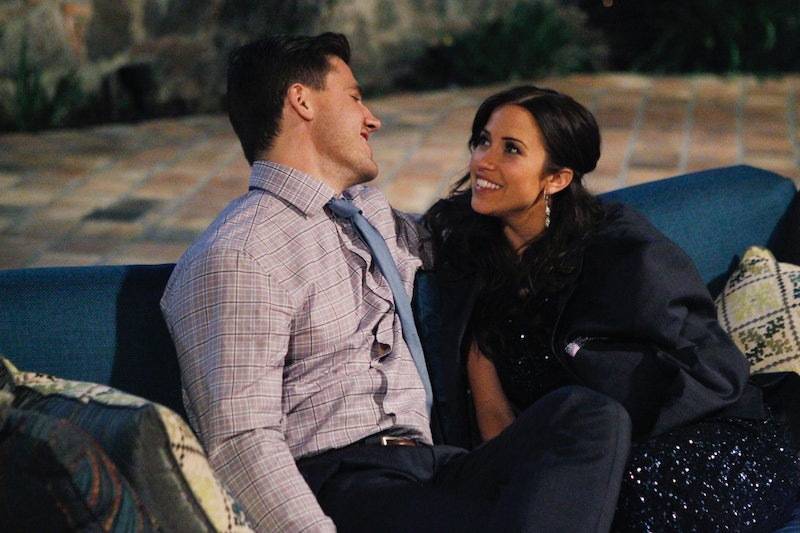 The Bachelorette can be cruel in so many ways, but none as cruel as the dreaded two-on-one date. On this week's episode, Kaitlyn stuck JJ (yes, JJ's still around,) and Joe together for a date... and, of course, as these things typically work, one guy gets a rose and one gets sent home. It's quick, painful, and actually the worst. Being that both of these guys can be dramatic, I was a little worried, but the date ended up being way more low-key than I thought — except for one small detail. JJ confessed he cheated on his wife to Kaitlyn, and it was pretty obvious that isn't the kind of information she was hoping to hear.

It started off harmless enough with a picnic on a gorgeous island called Ireland's Eye, and after some wine, each guy took Kaitlyn aside for a private conversation. Joe used his time to tell Kaitlyn he's falling in love with her, and when it was JJ's turn, he laid it all out there: His previous marriage ended because he made what he calls a huge mistake.

"Three years ago I cheated on my wife," he said. "I made a mistake that has basically destroyed my life. I lost my wife, I lost my daughter half the time, everything I worked for in my life was gone in one bad decision."

Even though JJ hasn't been my favorite dude this season (especially after all of the Clint riff raff), I have to respect him for that. It takes a lot of guts to be so honest with someone, but that honesty is incredibly important, especially when Kaitlyn is trying to make a decision on who to spend the rest of her life with. For some people, hearing something like that can be a dealbreaker. And while it didn't seem like it was for Kaitlyn, Unfortunately, though, that honesty wasn't enough to keep him around another week, and she decided to send him home.

"I'm genuinely looking for a husband and someone to spend my life with and that takes time," she said. "Joe, I don't think that we've had that time. JJ, you've got a beautiful daughter at home and I don't think it's fair to keep you here if I don't see a future with you."

JJ was pretty bummed, but it's probably for the best. Kaitlyn's right — it's not fair to keep him around when his daughter isn't seeing her dad. And the good news? JJ went out on a high note. He may not have shown his best colors this season, but now, he's a little easier to respect.