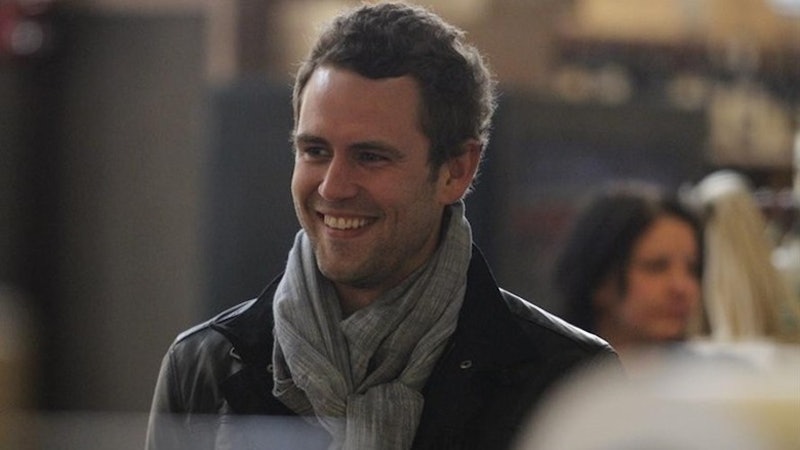 Poor Kaitlyn! Since she was voted in as The Bachelorette at the beginning of the season, she's been living an emotional roller coaster every single week. The latest major hill? Sleeping with Nick Viall last week, which has led to some serious security issues for Shawn in his relationship with Kaitlyn. After a super tearful talk with Shawn in her hotel room, Kaitlyn realized that if the rest of the guys found out what happened with Nick, it would seriously damage her relationships with them if the news came from someone other than her. And surprisingly enough, when Kaitlyn pulled Nick aside and asked him to keep their "intimate" night to himself, he responded with actual human tears.

Guys getting emotional on The Bachelorette? Not a big deal. Nick Viall getting emotional on The Bachelorette when he's normally cool as a cucumber? Big deal. Seeing him cry was totally unexpected, and I was surprised it was actually happening. And the tears weren't because he wanted to tell everyone and was disappointed he couldn't (obviously), but I'm pretty sure because this conversation was a signal of this thing getting real. And for the first time, he could see himself not surviving a rose ceremony.

"I spend time with you and I leave with this confidence and then I remember I was the over confident guy, and that makes me very nervous," he told her. "I'm scared to death. But like I said when I showed up, I know I'm here because we want the same thing. When it's all over, if it is us, I hope it's us for the rest of our lives."

It definitely does seem like Nick's past Bachelorette experiences from last year are making him second guess himself, but he shouldn't. Regardless of how the fans (and the other contestants) feel about him, Kaitlyn obviously cares about him a lot. Don't worry, Nick — you're not going anywhere.