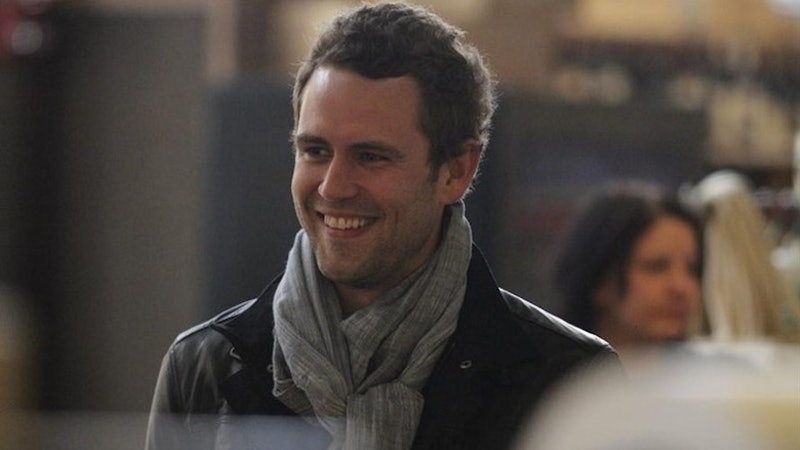 Everyone you meet these days has an opinion about The Bachelorette . And, yes, I really mean everyone, because I was able to convince some guy I was talking to on OKCupid to watch an episode and he had a lot of feelings about it. But that's not important right now. More specifically, everyone probably has an opinion about Nick Viall. There are plenty of people out there who think Nick and Kaitlyn could really be great together in the long run, and there are those who believe that he lives up to his last name. (As Clint said, "villains gotta vill.") No matter your feelings though, you can't deny: Nick Viall has been shaking up The Bachelorette ever since Andi's season.

As someone who, admittedly, didn't watch that season, I initially had trouble understanding why people were so agitated by his return. I mean, my roommate had some STRONG feelings about him, and other than what I could find about him via a quick Google search about his time on Andi's season and how much people seemed to dislike the way he behaved, he was pretty much a mystery wrapped in an enigma wrapped in bacon wrapped in a rose.

That is, until now, because I've engaged in some serious science to complete this assignment. After watching (and becoming weirdly emotionally invested in) Kaitlyn's season, and after some in-depth conversation with my roommate about Nick's behavior on Andi's season, I've discovered that Nick has always been quite the little troublemaker. Here are seven ways he's shaken things up on The Bachelorette ever since his first appearance.

1. When He Showed Up Four Weeks In To Kaitlyn's Season

In the words of Taylor Swift, we knew he was trouble when he walked in. (Although the timing was more likely the producers' fault than his.)

2. When He Pretended To Be Andi's Husband To Sneak Into Her Hotel Room

For those of you who don't remember, it was during one of the lengthy periods of down time between dates, and Andi was in her hotel room. Nick decided he had to see her, like, right then, so he went to the hotel front desk and told her that he was locked out of his hotel room and had lost his key, and his wife, Mrs. Dorfman, had lost her key as well. Instead of checking his ID to see if this guy was a total creep, the guy behind at the front desk was all, "LOL, you silly forgetful man," and gave him a key to Andi's room. Guys, this is some next-level stalker s***.

3. When He And Kaitlyn Had Sex

I don't mean to say that the fact that they had sex in the context of a relationship is a big deal or that they shouldn't have done it. I'm just saying that it's not a common occurrence on the show, and if the preview for this week's episode is any indication, it's going to cause a lot of man tears.

4. When He Put Andi On Blast For Having Sex With Him In The Fantasy Suite

While I don't know that I necessarily disagree with him for asking her why she slept with him if she didn't love him, I definitely have a problem with his delivery. That's not something he should have bring up in public, especially not on national television, no matter how many times he tried to reach out to her privately. It is, in some ways, the complete opposite of how he's treating his physical relationship with Kaitlyn, and that troubles me. It makes me think that, if Kaitlyn doesn't pick him, that he might use it against her in some way later on down the road.

5. When He Swooped In On Kaitlyn After Ian Was The Worst

Nick already had a rose from their group date, and while I understand that he probably just wanted to make sure that Kaitlyn was OK after Ian had essentially verbally assaulted her, he could've let other people have that time with her, since, at this stage in the game, time is key.

6. When He Essentially Got Kaitlyn An Engagement Ring In Dublin

Okay, so while their date was cute and all, if not a little bit too PDA-y for my taste, I was really turned off by the whole ring situation. For those who didn't catch the description from the vendor, the rings Nick bought for both Kaitlyn and himself were Claddagh rings, traditional Irish rings which represent love, loyalty, and friendship, and their meaning changes depending on the finger on which person wears it. When the ring in on the ring finger on the left hand (which is traditionally the engagement ring finger and is the finger that both Nick and Kaitlyn chose to wear their rings), it means that the wearer is engaged or married. Movin' a little fast there, eh, Nick, buddy?

7. When He, Supposedly, Hung Out With Andi Right Before Kaitlyn's Season

Not quite sure how Tanner knew about this (I'm assuming one of the producers let it slip), but it really skeeves me out that Nick was allegedly hanging out with his ex-girlfriend just weeks before coming on the show.

But, hey, first impressions can be incorrect, and just because he's a troublemaker, that doesn't mean he's not the right guy for Kaitlyn. I mean, Kaitlyn's been breaking just as many Bachelorette "rules" this season, so maybe they're meant for each other. Every pot has a lid, right? We'll just have to wait until the end of the season to see how it all works out.