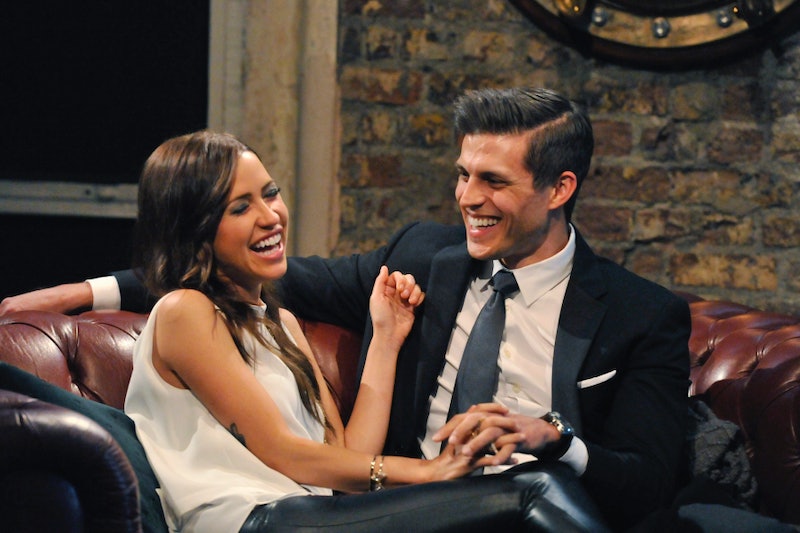 As exhausting as The Bachelorette and its varied rule changes are this season, there's nothing I love more than a good international date location, and Ireland is serving as an absolutely beautiful backdrop to all this drama. So obviously, as soon as Kaitlyn told Chris (also known as Cupcake) that they'd be going on a one-on-one date in a helicopter to the Cliffs of Moher, I was simultaneously jealous and waiting for the other shoe to drop. This late in the game, there was no way that a date this gorgeous was going to go off without a hitch, and I was right. Kaitlyn admitted she wasn't feeling it with Chris, and it was heartbreaking to see.

After their helicopter ride, which was, as predicted, beautiful in such a real way, Kaitlyn and Chris sat down for a picnic and the entire thing fell through. As pretty as the date was, Kaitlyn didn't seem into it, and when Chris finally asked her how she was doing, she broke down into tears.

"Every time I'm with you it's so good, and I have this checklist and you're it every time and it's been that way since you got here," she told him. "But I also promised myself that I wouldn't lead any relationship on because I feel like that's happened to me and I feel like my heart is elsewhere right now and I just don't know that I see us being together forever and I don't want to lead anyone on."

Chris was a perfect gentleman to Kaitlyn and then started crying once he was alone, which was brave and pretty sweet of him. But once she was gone, the floodgates open and he totally lost it. Chris was clearly blindsided and totally devastated, and I can't blame him. That's a tough blow to take.

The good news? Chris seems like he's doing pretty great these days. He recently attended CMA Fest, which is a music festival that takes place where he lives in Nashville, and he even recently caught up with his Bachelor bro Shawn.

Chris, you're going to be just fine. Somewhere out there, there's a beautiful woman with incredible dental hygiene and her own rolling cupcake car, and she'll be so glad to meet you.