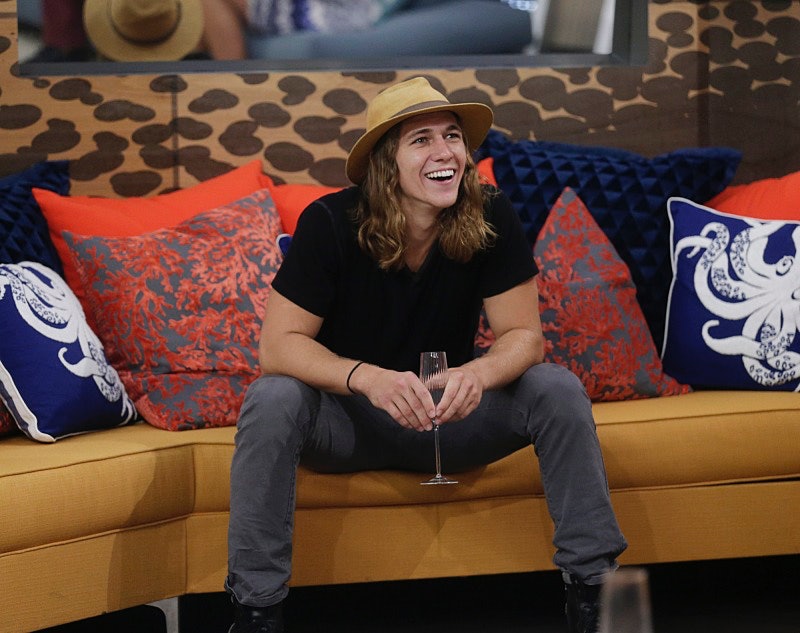 On Big Brother, the opinions of the house can change in a flash. Sunday's episode saw Jason get dethroned as Head of Household, leaving James in command of the house. The plan has been to try and backdoor Jace Agoilli, in order get him out both as a strong competitor and as a person the other houseguests feel they can't trust. Of course, that was only the plan to start with, and — spoiler alert — Jace has since begun campaigning hard that Audrey be the one who is backdoored instead of him, swaying many houseguests to his side. However, while Audrey might be a bit of a puppet master who has been silently moving pieces in place since she first arrived in the house, I think it might be a good idea for the houseguests to vote Jace out in the first elimination.

It's not that I have anything against Jace. He's funny, he looks like what would happen if Hayden Voss from BB16 and Jay from Jay and Silent Bob had a baby, and his pun-heavy bromance with Austin is hilarious. However, on the show and on the live feeds, Jace has already proven several times that they need to get him out of the Big Brother house as soon as possible if they want to keep the game easy to manipulate. He might claim that he doesn't have very much to return home too, but, hey, this is Big Brother. And Jason lives in his parents' basement. So who is worse off here really?

Here are 11 times Jace proved that it's time he gets voted O-U-T.

1. When He Cozied Up To Austin

2. When He Bragged About His Social Game

The person who brags about how great their social game is often ends up going home not long after that. When you think your social game is at an all time high, that usually means it's high enough that people see through what you're doing.

3. When He Tried To Call A House Meeting

Spoiler alert: house meetings rarely, if ever, go well. No wonder that, as soon as Jace left, James and Jeff said there was no way the whole house meeting thing was happening — or, at the very least, not happening honestly.

4. When He Blew Up Audrey's Spot

When you're targeting someone, it's always best not to let them know that you're targeting them. Jace got all up in Audrey's face, which means that she'll be on the offensive, and she may flip the house on him again before eviction night.

5. When He Threatened To Blow Up Everyone's Spot

Making grandiose threats like that make you a wild card and, while wild cards do have their uses as Frankie proved with Zach in BB16, most people generally want them gone for their unpredictable, untrustworthy natures.

6. When He Said This

Really, Jace? After three episodes, you think you have producer protection? REALLY, JACE?

8. When Everyone Thought He Was A Wild Card

When these words are said about any houseguest, it's almost a guarantee that they're going to go home soon.

9. When He Tried To Start A Revolution

Starting a revolution, especially this early in the game, is immensely difficult if not impossible. Everyone wants to skate by as long as they can before they start making big moves. Sorry, Jace.

10. When He Didn't Understand The Game

THERE ARE NO FRIENDS IN BIG BROTHER.

Well, now they basically have to send him home if only because they're as curious to hear the rest of this poem as I am. Thanks to all of the above, Jace has pretty much made himself into a prime target when it comes to the first eviction, but you never know. With Big Brother, things can change over night, and Audrey might find herself becoming the new target instead. We'll just have to wait and see.

More like this
When Was 'Bling Empire' Season 2 Filmed?
By Alyssa Lapid
Kourtney & Travis Crashed His Daughter’s TikTok Live In Their 2nd Wedding Outfits
By Grace Wehniainen
Everything To Know About A Potential 'Love On The Spectrum U.S.' Season 2
By Gretchen Smail
Everything To Know About 'RHONJ' Season 13
By Brad Witter
Get Even More From Bustle — Sign Up For The Newsletter