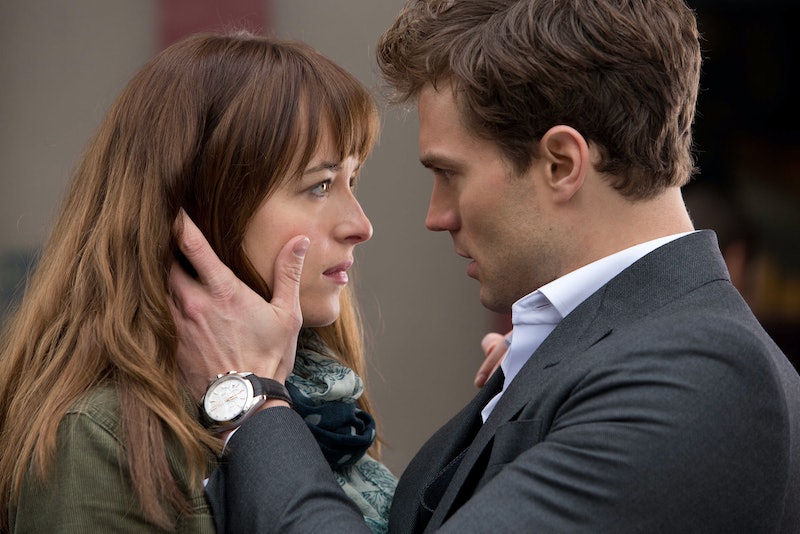 Much like sand at the beach or fireworks you just watched this weekend, E.L. James' Grey , a retelling of Fifty Shades of Grey from Christian's perspective, has been almost impossible to miss. Whether you've spent time lingering over the... creative reviews, or rushed right out to buy your own copy, I'd be willing to guess that you've caught a few of the choicest morsels from Grey on Facebook, Twitter, or wherever you get your very best gossip.

After hoping for a bit more conversation and heated debate about the book, I found myself disappointed by near universal disdain for the new novel. I'll just say that reviews have not been kind to Grey. The consensus seems to be that in this new volume, Christian Grey is neither sexy nor personable; neither suave nor the least bit likable. And yet, copies of the steamy new novel have been flying off shelves — could it be that the world at large likes Christian Grey more than reviewers realize?

After all, Christian Grey would never be found trolling the Internet where all of these reviews are piling up. No, that's stuff for commoners. A man of Mr. Grey's singular tastes would make his true mark wherever the women are scantily clad and the footwear is binding.... and just like that, it came to me: the one and only way to test the true measure of Grey. I could smell an experiment in the air, and just in time for the weekend.

What does the world really think of Christian Grey? Would the world's most famous bondage-lover actually be able to land a lady with lines like the ones E.L. James laid down for him? I decided to find out. The experiment was a simple one — could I survive a single cocktail party with only conversation culled from Grey? Would I be embraced, rejected, pulled into an elevator and ravished by my one true love?

After a week of talking myself into it, and several long debates about the perfect venue, the time finally came to take Grey out on the town. I'm not going to make you sign a waiver in order to enjoy all the dirty details, but I do feel obligated to warn you — if you don't like a good whipping, this may not be the story for you.

When I first came up with the idea to attend a cocktail party and see if I could survive it solely on conversation ripped from the pages of Grey, I'll admit I felt a certain thrill. After picking an unwary group of test subjects (i.e. friends and unknown socializers attending an event I'd just joined on Facebook) and taking Grey with me on the subway for a solid week, I was starting to get an uncomfortable sense that I was in over my head. I mean, I can feign confidence like the best of them (especially when cocktails are involved), but I rarely find hope physically arousing, as Christian so clearly does ("Do I dare to hope?” his head wonders. "Damn it. Yes, I do," the voice in his pants repliesshi).

By Saturday afternoon, I had worked myself into a slight panic — if there were a voice in my pants, it would almost certainly have been urging me to abandon ship, but I had already promised this story to my editor, I was determined, and I had RSVP'd.... there was no way out now.

So, I had a pre-game cocktail, brushed up on my Grey conversation, pulled on a skirt I thought Christian would find suitably accessible, and shimmied out the door before I could change my mind.

Perhaps it was the cocktail I consumed on an empty stomach, or the sheer terror in the face of what lay ahead (I might not have mentioned this, but I'm not great at small talk under the best of circumstances), but by the time I arrived I was literally trembling. I decided the only way forward was a Grey way, and after ringing the bell and slogging up the stairs, I slapped on my most impressive sh*t-eating grin in true Christian Grey-style ("My face erupts in a shit-eating grin"), and burst through the door like I owned the place. Looking back on it, this may have been the highlight of my night.

As someone who would perhaps best be described as shy in most social situations, I was actually surprised how well the "shit-eating grin" went over. Thankfully, that first little act of Grey artifice gave me the confidence and the social cover to slide into the kitchen and wait for the offer I knew was coming and the response I knew I had to give.

Guests mingled, I nodded imperiously like I imagined a sex-starved CEO would do, and eventually I caught up with the host who thoughtfully, politely, and predictably, offered me a drink. I looked her up and down and replied that I was thirsty... but not for a drink.

I ask, “Are you hungry?”“Not for food,” she teases. Whoa. She might as well be addressing my groin.

There was an awkward pause, a laugh, and a hug... I didn't realize it at the time, but this was the beginning of the end. I was already morphing from "awkward but charming" into full-on creepster.

Without the drink I foolishly — if necessarily — turned down, I began to feel painfully out of step with the rest of the crowd. In the spirit of the grand experiment, I soldiered on, sidling up to an acquaintance of sorts and smirking ruthlessly until someone asked me about myself. Although I briefly considered passing myself off as the owner of Grey Enterprises Holdings Inc., a bald-faced lie did not seem to be in the spirt of the challenge, so I went vague with a generic statement about my work ("Bringing affordable first world technology to the third world is something I’m determined to do"). Faces fell, polite smiles emerged and quickly fell away — it seems that there's nothing like a sober smirker with a holier than thou attitude about her work when it comes to scattering a loose crowd coming together at a cocktail party.

Proclaiming his philanthropic aims loudly and proudly may have garnered Christian Grey an adoring audience, but my attempt rapidly produced the opposite results. I found myself watching as backs turned, thinking back to Christian Grey and attempting to work up the disdain he would surely feel at such obvious disrespect. ("With a pout she turns her back on me and continues to whisk the eggs with gusto. I wonder if she has any idea how disrespectful this is to someone like me.")

Perhaps unsurprisingly, my haughty disdain did not lure in any new conversational partners. I was still sans cocktail and rapidly losing whatever mojo that sh*t-eating grin had worked up, so I quickly defaulted to a Grey classic, and muttered under my breath, "Damn! Get a Grip!"

While the self-directed pep-talk did get me moving back towards the kitchen (and those elusive cocktails), it turns out that talking to yourself is not as endearing as certain sexy CEOs make it seem. It was at this point I noticed that most partygoers seemed to be intentionally avoiding my gaze.

As I caught the eye of a nervous couple in my path, I decided to take a more direct Grey approach, and I heralded them with a cocky (and perhaps somewhat confusing) offer to stop their fidgeting ("Oh, I could stop your fidgeting, baby"). In the end, I only made it worse, and after muttering something apologetic under my breath, I hightailed it to the bar.

Back in the kitchen I went straight to the cupboard and poured myself a rather large beverage, noticing the sharp intake of breath from my fellow revelers. This time I didn't even have to try for a Grey catchphrase — my "holy crap" (which was both audible, and not terribly well-received) came as naturally to me as stalking and sadism does to dear Mr. Grey. It was at this point that it occurred to me I might just be method acting, and truthfully the thought terrified me. I'm embarrassed to admit it but I let out another involuntary "holy crap."

With a drink in my hand, and the vague sense that I might have actually become Grey, I decided to really go big. Recognizing a familiar face, I made my way over and let the object of my attention know that she smelled as sweet and wholesome as an apple orchard (“She has a fresh, wholesome fragrance that reminds me of my grandfather’s apple orchard”). She burst out laughing. Out of context, that could perhaps have been considered a win, but at the time I felt my Grey persona shrivel up like a raisin in the sun.

With a pleasant and amiable companion of my very own — a charming reveler who thought I was amusing rather than full-on crazy, I was tempted to slip out of the experiment and live the rest of the night as myself. But, in the spirit of journalistic integrity, I decided to go for the gold instead, and when the moment felt right, I gave my dear friend a wee spank.

Getting Out of There

Truthfully, my pal didn't seem to mind; I guess I'm odd enough to pull off a little Grey rough stuff in the midst of a party without offending anyone who knows me well enough.

Nonetheless, like Christian, I found myself confused (“I’m confused. I wanted to spank her. But she's said no.”) — after all, when you've alienated your host, frightened off a room full of acquaintances, and spanked your friend, there really isn't anywhere to go but home. After awkwardly expressing my confusion (and, I'm not to proud to admit it) confessing the entire experiment (to general shock, awe, and further laughter from my apple-scented spankee), I set down my glass, threw on one last sh*t-eating grin, and sauntered out into the night air and back to the comfort and safety of my own personality.

Rather than taking public transit home, I decided to walk home and try to make sense of what was undoubtedly one of the most uncomfortable parties of my adult life (and that's saying something). Despite the rather surprising impact of a sh*t-eating grin (and I may just be putting that to good use again in the future), it turns out that Grey plays about as well at a cocktail party as it does on the pages — while it may spark amusement in certain circles, the prevailing reaction of derision, discomfort, and general disapproval seemed to be about right.

I can certainly say that I won't be slipping back into Christian Grey's shoes any time soon, and I can only hope that a long hot shower and several years worth of awkward encounters and confusing explanations may one day wipe clean my slate.

More like this
The 20 Best Audiobooks To Fall Asleep To
By Aoife Hanna and K.W. Colyard
Why The '365 Days' Sex Scenes Are Good, Even If The Movies Aren’t
By Arya Roshanian
30 Books To Read This AAPI Heritage Month
By K.W. Colyard
Simply Sayo Doesn’t Consider Kpoetry Hard Work
By Jessica Morgan
Get Even More From Bustle — Sign Up For The Newsletter