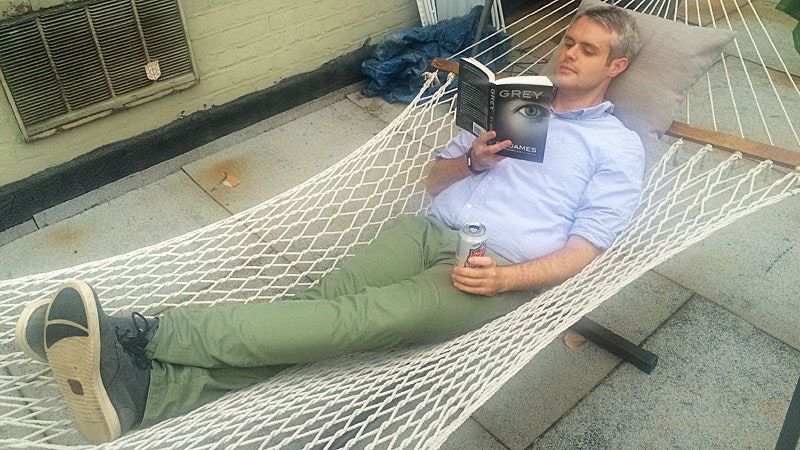 I am probably the last person on Earth who would be first in line to pick up the new Fifty Shades of Grey book, Grey: Fifty Shades of Grey As Told by Christian . I read and write about foreign policy, international relations, and other decidedly unsexy topics all day. Much like Anastasia Steele, I’m unversed in the world of ropes, gags, carabiners (well, at least outside of camping), and all of the other accoutrements of Christian Grey’s BDSM wonderland. At first, I thought I wouldn’t be up to the challenge of reading this book — the last book I brought to the beach was about cocaine trafficking and narcoterrorism. It didn’t go well with margaritas, but it was in my comfort zone.

Without a single safety word or contract, I decided to dive into this retelling of Fifty Shades from Christian's perspective. Going into something potentially painful strictly for the fun of it is good enough for Ana, so it should be good enough for me, right? Perhaps being completely unaware of the global publishing phenomenon that made author E. L. James $95 million richer would make me the perfect fit to read this book in one hazy 24-hour period.

Undaunted by weird looks on the subway (and one overly enthusiastic lady who read an entire chapter over my shoulder on my commute to work), I took up the challenge and plunged into the mind of Christian Grey.

But not before I had a drink. Or two. Or stayed up most of the night with a beer in one hand and the book in the other. If I was going to venture into this brave new world (sorry, Aldous Huxley), I sure as hell wasn't going to do it sober. I prepared myself for a sleepless night, hoping that I, like Christian, would be "[...] swept up in a storm of emotion that [I] cannot comprehend and cannot resist."

What I learned in the process was, well, unexpected. I went in thinking that I'd be captivated by a whip-laden love story, and came away with a completely different set of questions and thoughts. Most of them? Maybe not the sexiest. Here are the ones where I could understand my notes well enough to reread after I finished the book as the sun came up.

What Does Christian Grey Actually Do for a Living?

OK, does anyone know what Christian Grey actually does for a living? One minute he's feeding the poor through a confounding food drop in Darfur (complete with NGOs and senators!), and the next, he's looking at tablet mockups. Is this guy in tech? Agriculture? Import-export à la Art Vandelay? Christian's all over the map: he's got his hands in the philanthropy game while, I don't know, maybe breeding rhinos and running some kind of harness manufacturing firm. Yet at the same time, he has the capability of running background checks and has an assistant who moonlights as his personal underpants-fetcher.

This all confounded me for a while until I had a bourbon-soaked epiphany: Seattleite? Billionaire? Dude who is concerned with the poor?

Christian Grey is supposed to be a kinky Bill Gates. Hell, Anastasia even asks him if his playroom is where he goes to play Xbox — a Microsoft creation. CAN'T YOU SEE THE SIGNS?

Christian Grey Might Actually Be Three Children Inside an Overcoat

If this enigmatic sociopath isn't partying with Vincent Adultman from BoJack Horseman , I'll eat my hat. These dudes are cut from the same cloth: both are ladies' men, successful business tycoons, know what they want in life and just how to get it: sweet cars, a hot bod, and by pulling women's hair.

But seriously, Christian Grey is every 14-year-old boy's ideal perception of self: has a rippin' six-pack, tons of energy (two runs a day, Grey? C'mon man!), sweet cars, and an even sweeter helicopter. He's got hot ladies who do whatever he wants them to do, and an elevator in his building that goes straight to his floor! He also hates his mom and has crippling insecurity. So all in all, I'm beginning to wonder if he doesn't want to be touched because he's afraid his overcoat might open up and three adolescent boys might come tumbling out.

What's With the Vocabulary Lesson?

Don't get it twisted, I love me some words. I'm not even opposed to using some when I'm maybe a soft 23 percent certain I know what they mean. Insouciance! Parliamentarian! Cromulent! We all love some big-ass words, especially when we're reading naughty books.

There are times, however, during which I felt like I was reading a dirty thesaurus. "Maladroitness"? "Concupiscent"? There's a time and a place for a big word or two, but it's usually not before the protagonist starts caning his submissive sex-slave. As Mark Twain said, “Don't use a five-dollar word when a fifty-cent word will do.” Even if you're a gajillionaire who has a helipad on top of his apartment building.

On the other hand, I devised a nifty drinking game where I'd take a sip for every time Christian called Anastasia "delectable," which was beyond creepy. I had to give up on that because I ran out of beer by the time I got a third of the way through the book.

I'm Kinda Certain That Stalking's Not a Good Idea

I'm not an expert on this subject, but I'm fairly certain that no women — or anyone, really — want someone to come rescue them from peril after putting a trace on their cell phone. But here's Christian Grey, rolling through PDX with his woes, waiting for his undergraduate paramour to give him a second chance after an awkward miscue on their would-be first kiss. What's worse than getting your Edward Snowden on and tracking someone's cell records? Oh, JUST RUNNING A FULL BACKGROUND CHECK ON THEM! That's all.

I don't know about you all, but having a girl's Social Security number before the first date makes Google-stalking seem downright benign. It was at this point that I threw whiskey into the mix. Which brought me to my next revelation...

Christian Could Use a Drink

So, Anastasia's Knight in Pervy Armor saves her from a college bar after tracking her phone, right? By the time she's done puking, he's already lecturing her about the pitfalls of booze. "Perhaps she has a problem with alcohol," he says. "The thought is worrying, and I should consider whether I call my mother for a referral to a detox clinic."

It was around this point in the book (page 57 for those of you playing along at home) that I finished off a few Narragansett tall-boys, and found myself in need of a reading break.

If Christian wasn't going to drink, I sure was. Captain Bringdown and his rowdy sexcapades required backup supplies, and I still had pages upon pages ahead of me to read. So we're clear, Christian isn't a big fan of drinking, smoking, marijuana, or the hard stuff. Funny how the people who hate these things with a passion are those who often need to relax themselves. If Christian popped an edible every now and then, perhaps he would lay off the urge to reach for the riding crop.

This All Could Totally Happen in 10 Days (Except... It Couldn't. Definitely Couldn't.)

This one really threw me for a loop. Anastasia Steele shows up at this dude's office, conducts a terrible interview, and 10 days later she's signing on the dotted line to become his sex slave? I mean, she is literally signing a contract to do all of this crazy stuff with a stranger? It took me longer than that to get an apartment in Brooklyn.

This guy has to be a sociopath, a pickup artist, or the second coming of Andrew Carnegie. I'm not totally sure which, and I'm not confident I want to find out. However, it does make me wonder how long it took for his contractors to finish his playroom, given his ability to close a deal. I'm going to venture a guess and say that it had to be done within a work week, tops. Including the suspension hooks.

Christian Grey Is a Bro

Her eyes widen. They really are beautiful, the color of the ocean at Cabo, the bluest of blue seas. I should take her there.

Now don't get me wrong, I'm all for the classics. But the book shoutouts in this story are a little too close to AP Literature for my comfort. First, Anastasia's favorite authors have been dead so long they might have actually turned into petroleum: there's almost no possible way she could have graduated with a Lit degree and without mentioning a single author from the 1920s onward. Same goes for Christian.

Going Outside Your Comfort Zone Is Tough, Messy Work — I Get It

Like Anastasia, I decided to associate myself with a crazy person I knew nothing about when I picked up Grey. It was my first time, and I was scared. Was I prepared? Hell no. Did it probe deep parts of me that I didn't know existed? Well, yes.

As much as I don't think I'll be diving into the genre too much in the future, it was good to take a break from the serious stuff. I may never have the temerity (see, I can use big words, too) to delve deeper into the series, but I can say I gave it a shot. Also, I'm pretty confident I'm not a sociopath now. So I've got that going for me, which is nice.