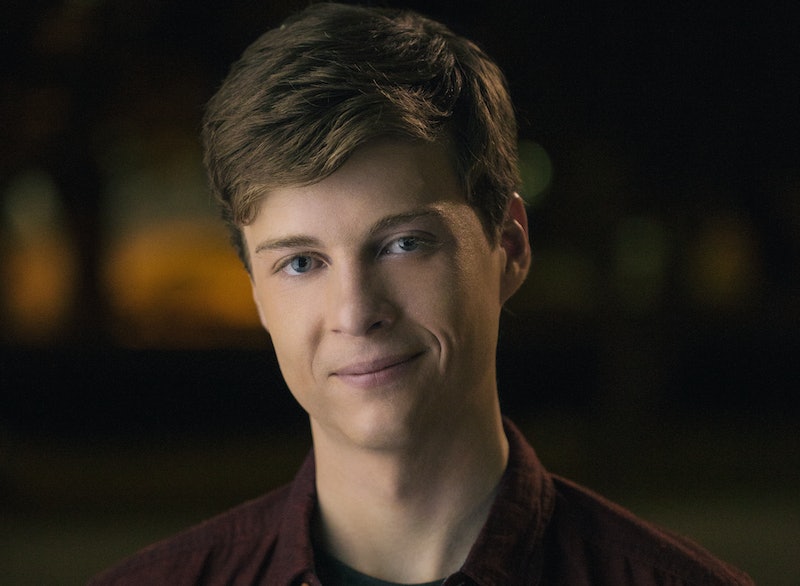 Thank goodness for Noah. For those of us who were hardcore fans of the Scream film franchise, we all know that those movies would be nothing without the addition of Jamie Kennedy’s Randy, the resident horror film geek who could give the characters and audience a taste of what was to come and poke fun at the tropes we’re so used to seeing in a slasher film. Randy was the voice for the viewers and the meta goodness we were all craving so much. Thankfully, MTV’s Scream uses Noah to fill this role, because clearly it recognized the greatness of this character. In this iteration, Noah is more gung-ho about serial killers than Randy, but still shares his knowledge for the horror movie genre. He’s the one who tells us in that quintessentially cheeky, Randy way that there’s no way to do a good slasher movie as a TV series. Noah is also the one who tells the characters and audience about the mystery that is Brandon James. Throughout the series premiere, Noah seems to be unassuming and unable to kill anyone. But at the end of the premiere, Noah pushes his hair across his face, revealing a pretty gnarly scar as his voiceover talks about the secrets people keep. Are we supposed to believe that Noah could be the killer on Scream ?

If this TV series follows Scream 4 at all, one of the two Randy-esque characters actually does end up being one of the killers, alongside the main character. But I just can’t see that being the case here. Noah might be hiding a secret, but it looks like all of his fellow students are as well, from Audrey’s picture of Brandon James to Emma’s ex-boyfriend having creepy mysterious files involving the recently deceased Nina in a likely compromising position.

So what could Noah’s secret be? It’s possible that he could be so interested in serial killers because he’s related to one. Maybe he’s a member of Brandon James’ family. Or maybe he was also attacked by whoever killed Nina, and that’s why he has that scar and is so invested in what’s going on. Being deeply interested in serial killers might be creepy, but it’s certainly not a crime. It seems like Scream is trying to put some extra level of suspicion on Noah through his serial killer obsession, his scar, and his lack of emotion over Nina’s death. But to be fair, Nina was probably not the most friendly person to Noah.

His understanding of slasher movies could also an area of suspicion, but I think his monologue in the classroom on that subject matter is more to promote the meta aspect of the Scream series — the TV show and films — than anything else (Why the teacher allows this random tangent in the middle of talking about the emergence of Gothic literature in modern films and TV shows is beyond me). I just can’t see him being the murderer, mostly because I think I’m just hoping the show will be more clever than that. Noah is definitely hiding something big with that scar and mysterious smile, and though it's likely not a murderous alter ego, I’m genuinely interested in finding out what that is.