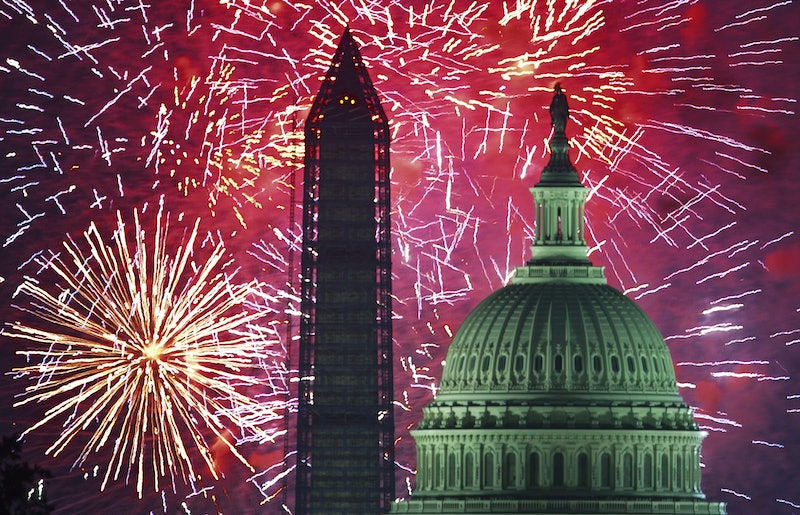 On July 4, 1965, 40 gay and lesbian activists protested outside of Independence Hall in Philadelphia, in what is widely considered to be the first LGBT civil rights demonstration. To honor the 50th anniversary of that historic protest, Philadelphia is celebrating LGBT rights this Fourth of July. To add to the already-monumental occasion, this will also be the first July 4 on which every same-sex couple in America will be free to marry. It's only natural — if not necessary — to celebrate both the anniversary of American Independence and LGBT rights this Fourth of July, not just in Philadelphia, but in every city across America.

Every year, July 4 marks the anniversary of the signing of the Declaration of Independence in 1776. The statement, which announced the formation of the United States of America as sovereign states from Great Britain (aka, kind of a big deal) says:

All men are created equal, that they are endowed by their Creator with certain unalienable Rights, that among these are Life, Liberty and the pursuit of Happiness.

Those are some pretty epic words right there, the very words that set our great nation apart in the international community, that give weight to the theory of American exceptionalism. Except they're a farce. In fact, there's a big problem with how we've been celebrating the Declaration of Independence for the last 239 years. Not all Americans could enjoy such unalienable rights, nor could they pursue the same kind of happiness that others could. These Americans are part of the LGBT community, and until last week, they'd been excluded from the promises laid out in the Declaration of Independence.

But that all changed last Friday, when the Supreme Court ruled gay marriage a Constitutional right in all 50 states, marking the biggest milestone in the LGBT civil rights movement's 50-year history. Though SCOTUS's decision was timed during Pride Month and right before the Pride March and anniversary of the Stonewall Riots in New York City, there is another day all Americans should spend celebrating our newfound marriage equality — because, after all, American independence and LGBT independence are not two separate things.

This Fourth of July, we can truly honor the Declaration of Independence because all Americans are finally included in its set of ideals. Here are nine ways to celebrate both American independence and LGBT rights.