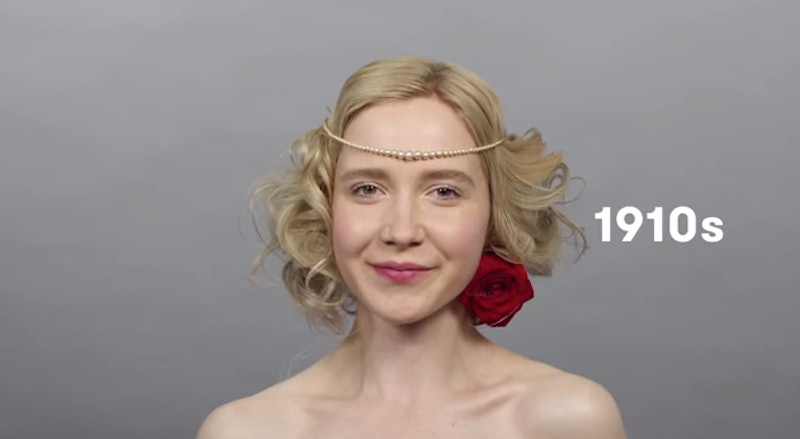 As a first generation American hailing from the Middle East, I am quite familiar with different beauty standards, and while every culture has got its distinct style persona, there are definitely overlapping similarities across the board. 100 Years Of Beauty: Russia, the latest installment in the Cut LLC's YouTube Channel series, shows us the uncanny similarities between Russian and American beauty trends over the years.

When you think of the many American beauty looks over the past couple of decades, certain iconic fads immediately come to mind. The roaring '20s were the very epitome of old Hollywood glam, the '60s was the quintessential boho-hippie era, and the '80s were obviously dominated by larger-than-life hair. According to this video, Russian women took much influence from American women (or vice versa), as many styles spotlighted in the short film are reminiscent of classic ones we have seen throughout American history.

Let's take a look at some striking similarities between the two, per decade, shall we? Check out the examples below.

Madmoiselle Coco Chanel was the style icon of American beauty in the 1920s. She portrays the era's ode to all things glitz and glamour, including dazzling hairdos, smoky eyes and lots of pearls. The Russian model looks strikingly similar to the American one, don't you think? Perhaps the roaring '20s were more universal than we thought.

Brigitte Bardot pretty much started the whole headband look in the '60s and it has become the poster child style of the decade. It seems Russian women have taken note of the headband thing, too. Perhaps Bardot was a global inspiration?

The resemblance between the two cultures is quite uncanny here, you have got to admit. As a born and raised foreigner, I thought the whole '80s big hair thing was an American-bred trend, but apparently I was wrong. It seems women in Russia were teasing their hair to unnatural heights too, just like Madonna.

Check out the full video below to see the rest of the beautiful decades.

More like this
All The Early 2000s Hairstyles Rihanna Wore In A$AP Rocky's "D.M.B." Video
By Olivia Rose Ferreiro
10 Swoon-Worthy Beauty Looks From The 2022 Cannes Red Carpet
By Olivia Rose Ferreiro
Ombré Hair Is The Lower-Maintenance Way To Play With Color
By Paris Giles
Millie Bobby Brown's Blonde Hair Is Very Britney Spears Circa 2002
By Paris Giles
Get Even More From Bustle — Sign Up For The Newsletter