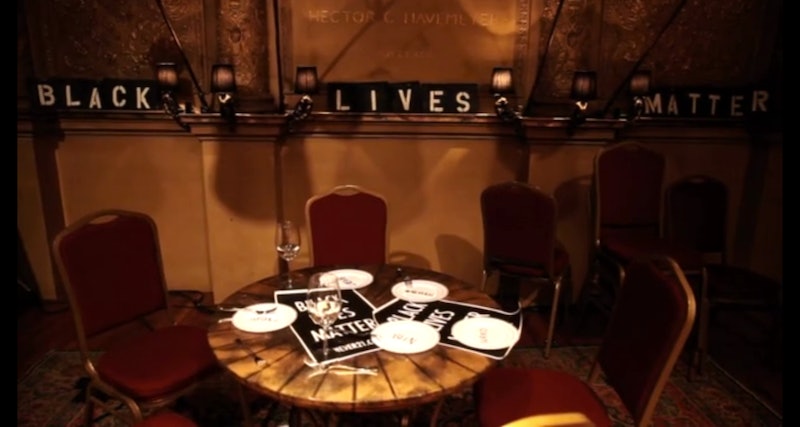 A video by Never 21, a group that protests the senseless killing of black children at the hands of police, shows members of the Never 21 Collective Black Lives Matter flash mob in server uniforms making their way down New York City's streets. They head through the glossy doors of the elite restaurant 21 Club, where patrons await on red leather benches and plush chairs. Though these "servers" are saying "Specials?" as they dole out menus to customers, there are no hors d'oeuvres or cocktails to be found inside these sleek black booklets. The letters in the "menus'" elegant font spell out something far more troubling: the names of black children whose lives were taken by police before they'd ever have the chance to sit down at any bar, let alone a luxurious one like 21 Club's.

The remainder of the group attended to the lawn jockeys lining the restaurant's balcony, dangling signs from their necks, each with one letter to collectively spell out "Black Lives Matter." Just as the signs looked out of place in front of an establishment sought out by tourists for its upscale reputation — until 2009, it required male patrons to wear ties — the message left customers unsettled. One attempted to dissolve the tension by joking “I’ll take the VonDerrit Meyers Jr.”; another took offense, exclaiming, “I’m not racist. I don’t need this.” The video culminates with a man in a business suit taking down all the letters one by one.

Never 21 explained its motives on the Vimeo page that hosts the video:

We are tired of seeing men, women, and children be mistreated based on the color of their skin. The recent McKinney, Texas pool party incident serves as a prime example of what Never 21 has been and will continue fighting against. Similar to our first action [dressing manikins in a display window in "black lives matter" T-shirts], this was not intended to be an attack on the 21 Club itself. On the contrary, it was an opportunity for the iconic cuisine to support a movement that needs all of the allies it can get.

Do the customers' reactions indicate that the act poked a hole in the privileged bubbles these people live in? Or does it show that the message was lost on them entirely?

At the very least, it wasn't lost on some of the passerby, one of whom snapped a photo while commenting, "They really managed to make their statement."

You can make out another voice saying "black lives matter" from the midst of the crowd outside the restaurant watching the letters' removal. It's unclear whether this witness was simply reading the words or stating his own belief, as it is whether the message that black lives matter reached the restaurant's customers or was blocked by defensiveness or lack of understanding. What we can say for sure about Never 21's restaurant takeover is that the group was not preaching to the choir, and you have to give them credit for targeting the people who needed to hear their message most.