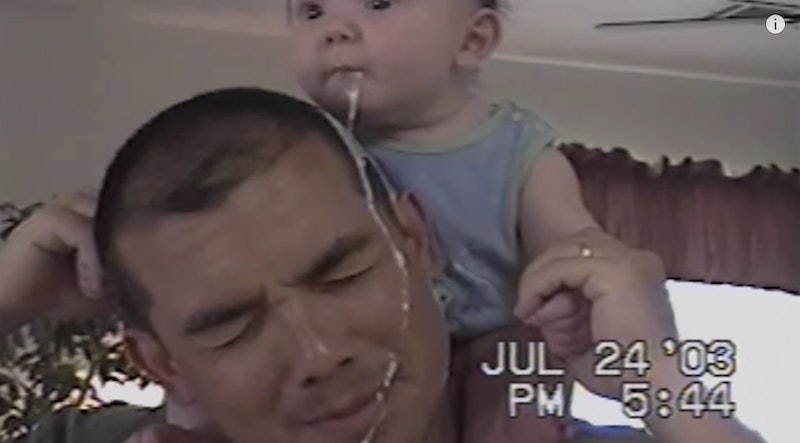 I realize, after having watched this video of babies throwing up in their parents' mouths, that there are exactly two ways you can respond to seeing this unholy shitshow: You can be horrified and scarred, or you can think it's absolutely delightful. I've decided that the former response belongs largely to people who don't have kids, and the latter is experienced by people who do have kids but are smugly sitting comfortably on the other side of the prime days of infant vomit. Because I laughed the mighty laugh of someone who has been there and survived, while my childless friends were basically burying themselves in a mountain of condoms, weeping about the unjust horrors of parenthood. They are weak and I am disappointed in them and they will never survive the harsh winter ahead.

Which isn't to say that I'm, like, a ~fan~ of puke. I'm not. It fucks up my day, no matter who it's coming from. Before I became a parent, my exposure to other people's vomit was limited (although not entirely absent; I made a lot of questionable choices in college). I don't even like having to deal with my own puke, so the prospect of personally coming into contact with other humans' stomach soup was not some shit I was trying to get involved with. This, I feel, is a very reasonable opinion shared by the majority of people in the world: Vomit is gross, we don't care for it, we make all attempts to avoid our own coming out of us, and for the love of all that is pure in this world, we definitely try to avoid anyone else's vomit going into us. Like, it's not a lot to ask for. That is, of course, until you take ownership of a baby. Babies are splendidly devoid of any bodily fluid boundaries. They pee, poo, and hurl with giddy abandon. Theirs is a kind of freedom only the neurologically underdeveloped and socially untrained can enjoy.

Frankly, I'm a little jealous of babies. I'm a giant knot of adult neuroses and obsessively maintained boundaries, so the notion of someone wiping my ass makes me want to die, but imagine being entirely liberated of those hang-ups AND having at least one adult human around whose actual job it is to clean up after you. They don't even know what a fuck is, let alone having any spare fucks to give. So yeah, a little jealous. Who I'm decidedly not jealous of are the parents of the unstoppable, unpredictable fountains of filth. These soldiers are in the line of fire at all times. My kid is 3 years old now, so it's been a few years since I've had a random burst of regurgitated milk come flying at my face, but I still have flashbacks. I sometimes I feel phantom spit-up running down the back of my shoulder sometimes. It's a cruel, disgusting, smelly period in a parent's life, and it sticks with you for years after your kid finally gets their reflux game in check. A moment of silence for those still suffering. We are with you. We are you. We see that spit-up on your shirt while you wait for life-sustaining coffee in line next to us, and we are pretending not to see it. We value your dignity more than your child who shamelessly treats you no better than a toilet. You are more than a toilet to us, fellow parents. (But also you smell a little weird, so we're just gonna stand over...here.)