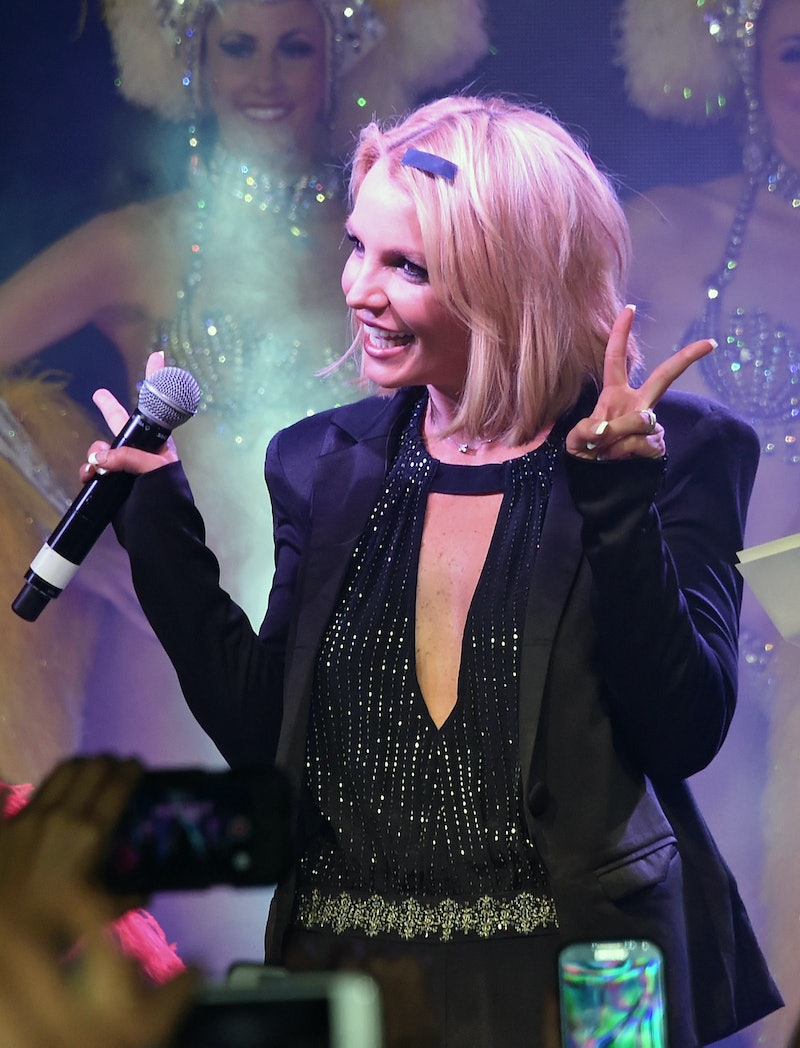 Since she was a wee eight-year-old on The Mickey Mouse Club, Britney Spears has been in the spotlight and subject to a lot of speculation from the tabloids and from fans. She is an icon of pop music, style, and hilarious facial expressions. We have watched her grown from the "Baby, One More Time" era, through the Timberlake years, the "Toxic" resurgence, and The X-Factor redemption, and with every step of the day, the tabloids are on her back, with stories of sex, drugs, and rock ' roll. The ridiculous Britney Spears rumor mill never stops churning. It just makes you want to say "LEAVE BRITNEY ALONE!" (That viral video is from seven years ago, but it still rings true.)

Over the years there have been pretty cruel ones, about serious issues like alleged drug use and claims of child abuse, but also some comically ridiculous ones. Every year since 1998, Spears has been subject of a death hoax: there is even a registered website called BritneyIsDead.com with an obituary. Spears is rumored to have dated Mario Lopez, Eminem (that would be a dope musical collaboration), Columbus Short from Scandal, and Robbie Carrico from American Idol. But throughout her hookups and breakups, Brit Brit has remained an inspiration, always staying positive.

But that didn't stop rumor mongers from trying. Here are the strangest, most random rumors from her career, ranked from innocuous to just plain vicious:

Complex included this their list of "The 40 Most Ratchet Music Rumors of All Time": There was speculation that Britney got a boob job at age 16. In 2008, a “friend” did tell Rolling Stone that it was true, and “she regretted the implants, particularly because her chest was still growing.” Yeah, OK.

6. She Suffers from Alopecia

Hairloss Talk claimed that Spears suffered from the condition that causes sudden hair loss. This report was never confirmed (hence the rumor bit), and even if it was somehow true, I repeat: LEAVE BRITNEY ALONE.

5. She's Been Lip-Syncing This Whole Time

Spears' people have denied that she lip syncs, so lay off. And even if she does, Britney > Ashlee Simpson. Sorry, Ashlee.

4. She Got in a Cat Fight With Nicki Minaj

In 2011, MediaTakeOut reported that "Britney came by Nicki’s dressing room with her [gay] dancers. They were talking s*** like they were going to do something. Nicki came out [of her dressing room] and at first was going to beat someone’s a**. But when she saw how RIDICULOUS Britney and them looked, she just laughed.” A very vivid work of fiction, indeed.

3. She Hooked Up With Robin Thicke

2. She Hooked Up With Jenna Jameson

Though Jenna told Howard Stern that she was very infatuated with Britney, Britney never hooked up with the pornographic film actress.

Did we learn a lesson today, everyone? Don't make up weird rumors about celebs. They are people too, OK?