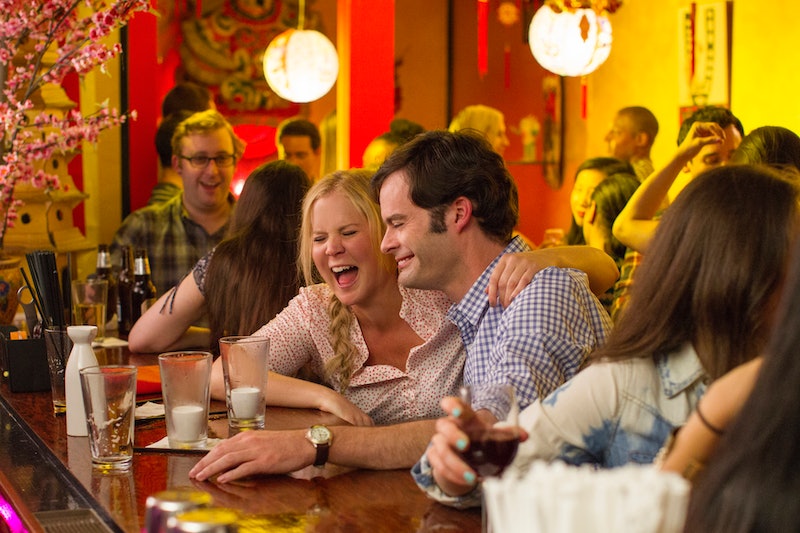 Written by and starring the whip-smart Amy Schumer, Trainwreck is the story of a 30-something who thinks monogamy is a joke, and then finds herself falling for an impossible-to-resist charmer. Schumer's main squeeze is played by the endlessly delightful Bill Hader. She's a journalist, and he's a successful sports doctor, and they meet when she's assigned to write a piece on him — and no, it's nothing like the set up for 50 Shades of Grey. The trailer sets the film up to be a takedown of the typical rom-com. But it doesn't just get you hyped for the film's release. It also has a catchy ear worm that will make you want to get up and dance. So what is the song from the Trainwreck trailer?

Ladies and germs, meet AJR, the New York indie-pop band made of three brothers who were all born in the '90s. They're here to make you shake what your mama gave you, and then make you feel incredibly old. Not only is Trainwreck a rom-com for a new generation, but so, apparently, is its soundtrack. The song from the trailer is called, "I'm Ready," and it might just be a cheeky nod to Schumer's character, who is far from ready when it comes to the whole relationship thing.

The song might seem familiar for more than its placement in the trailer. "I'm Ready" uses a sample of Spongebob Squarepants saying in his upbeat under-the-sea way, "I'm ready!" over and over again. So that probably explains why I had a hankering for a Krabby patty after listening to this tune.

"I'm Ready" is absolutely infectious, and, even though it was released in 2013, I have no doubt that it will find a whole new audience after the release of Trainwreck on July 17. Have a listen and enjoy a song that's all about getting your flirt on and hitting the dance floor.