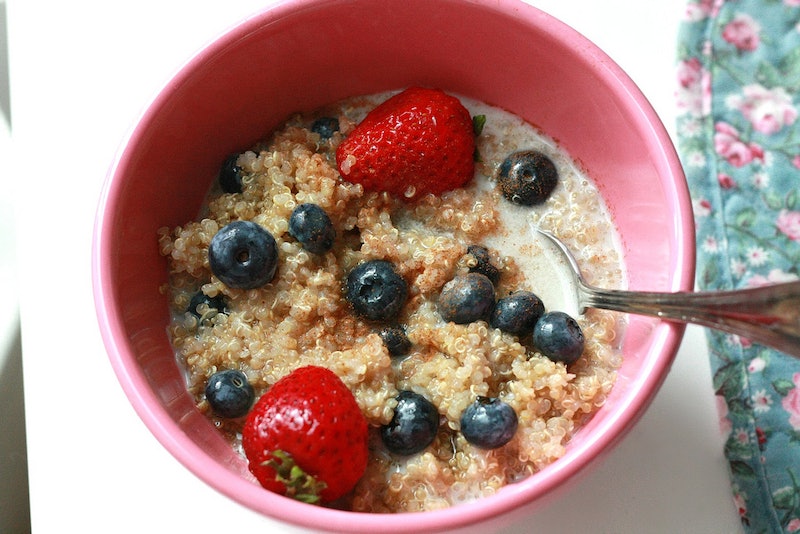 What would you do if I told you you could name your baby Quinoa in exchange for the chance to win a mind-boggling amount of restaurant fare? Would you laugh? Cry? Roll your eyes and comment about how it's so last year, because you already have a cousin named Quinoa and she's way hipper than any other baby named Quinoa will ever be? Well, whatever you suspect your reaction might be, you'd better figure it out fast — because BJ's Restaurant and Brewhouse has made that scenario a reality. The chain is currently running a contest asking new parents to name their newborns or new-adoptees after the protein-packed grain for the chance to win $10,000 of food.

The contest comes as a somewhat baffling promo for two new menu items the restaurant has recently added: a Roasted Chicken with Spinach Quinoa Bowl and a Roasted Salmon Quinoa Bowl. Said BJ's Restaurant Executive Vice President and Chief Marketing Officer Kevin Mayer in a press release, “We are so excited to introduce these amazing new Quina Bowls that we wanted to do something big, maybe even a little crazy.” So, if you A) either give birth to or adopt a child, B) name it Quinoa, C) can prove you named it Quinoa (hi there, birth certificate!), and D) manage to accomplish A through C by Labor Day, you've got a shot at winning the grand prize — which, of course, is $10,000 worth of food from BJ's. There will only be one winner, though, and that person is the first one who successfully passes all of those tests.

But hey, you can also always settle for changing your first name on Twitter to Quinoa by July 6. Doing so will net you a $10 off $35 coupon to BJ's.

Obviously there are plenty of types of food that work quite well as names for humans. Clementine? Love it. Jasmine? Beautiful. Basil? There are worse people in the world to share a name with than Basil Rathbone. There are also, however, a number of food items that work… shall we say, less well for actual people. I would argue that Quinoa is one of them (and really, do you want your child to have to spend their entire life explaining that they have a ridiculous and pretentious food name because of a promotional contest?) — as are these options here. I suppose I could be wrong, though; would you name your offspring any of these 10 names?

“Kale” is actually not that unusual of a name (or at least, it's not totally unheard of these days); there are plenty of folks out there running around with a name reminiscent of a dark, leafy green. Bonus points if you have twins and name the other one "Chip."

Because honestly, I think the girl in the Buffy the Vampire Slayer episode “Anne” who decided to call herself “Chanterelle” without knowing that a chanterelle is a mushroom is one of the funniest one-off jokes in the entire series.

According to TIME, there were six males in the United States named Shiraz in 2013, as well as five females named Chardonnay. It might not be so bad to have a booze-inspired name as an adult — but I would imagine it would be somewhat problematic for the first 18 to 21 years of someone's life.

Lovely spice; not so lovely baby name. Although I suppose at least you could call the kid Cory.

Don't get me wrong — gorgonzola is delicious; however, it's probably also ripe for a huge amount of teasing. Besides just being somewhat unwieldy on the tongue, it's also somewhat… uh… fragrant. And just wait til the kids get to their Greek myth unit in school and learn what a gorgon is.

If you really want to name your child after something beer-related, at least go for something like Sam. Or even Corono would work; "crown" in Spanish could be a lovely name.

Smoked salmon isn't exactly the stuff baby name dreams are made of.

I love Sriracha as much as the next girl, but naming anyone after it ensures that roll call will always be as painful as drinking the spicy stuff straight.

Fine as a nickname; awful as a real name. No one will ever take anyone named "cupcake" seriously, which could have some severe repercussions when little Cupcake grows up and tries to enter the professional working world.

NO. DON'T DO IT. I DON'T CARE HOW TRENDY COCONUT OIL IS. SERIOUSLY — I MEAN IT.