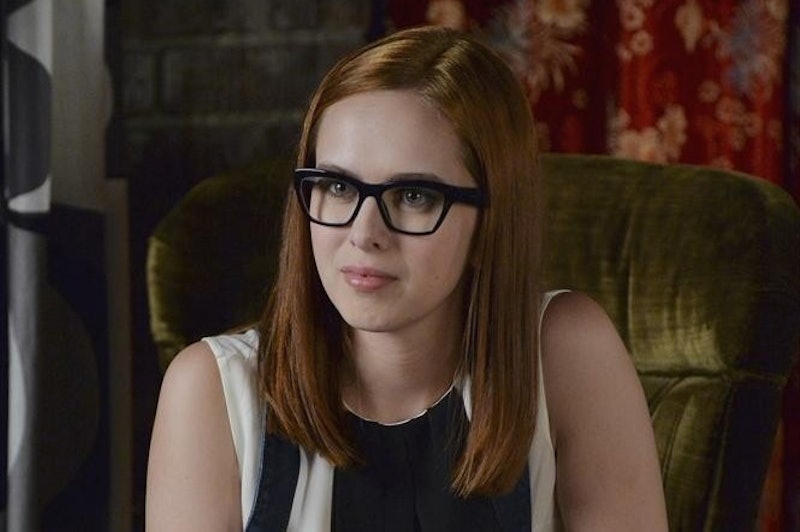 Initially, you may have thought that Mona's friend Lesli Stone was nothing more than a temporary distraction, leading up to the whole #CharlesIsA reveal last season. However, Pretty Little Liars Season 6 is going to great lengths to reestablish this character's presence in Rosewood this week and next, indicating that she may have a bigger role to play than we ever thought before. In fact, now that we're not entirely sure whether or not Charles is actually dead, that leaves A's identity once again up for grabs, meaning that he (or she) could be anyone. And since any friend of Mona's is not necessarily a friend of ours that could very well mean that Leslie is working for the A Team. Or, even worse, she's actually A herself.

Think about it… how much do we actually know about this character? The answer is simple: not much at all. Aside from the fact that she went away to school and conveniently couldn't make it home for Mona's funeral due to "exams," Lesli is pretty much cloaked in mystery, which usually is a red flag that she has something important to hide. I mean, we're talking about someone who wasn't even on Hanna's radar before she just showed up out of the blue after Mona's tragic death.

If the two of them were really so close, then why wouldn't Mona have mentioned her to Hanna at some point or another? (These are things you usually tell your BFF about right?) Granted, Mona wasn't exactly without her fair share of secrets, but only when it involved details surrounding A. Does this mean Lesli is somehow connected to this complex puzzle? The evidence certainly seems to be getting stacked against her, especially given her upcoming return. Just look at next week's episode, titled "No Stone Unturned." You have to be someone of great significance to get your last name so prominently placed. Then there's the episode description itself, which shows the Liars hot on Lesli's trail:

"The Liars are on a hunt for proof that Leslie is A, but as the investigation ramps up, A's threats escalate. Meanwhile, a friend of Emily's makes her a surprising offer and Spencer is pressured by her family to make an important decision."

Why would A's threats escalate when the Liars start going after Lesli? Perhaps because they're getting too close to knowing the truth. It's hard to say right now how Lesli may have known Charles, but I think there's a distinct possibility that she's the one the Liars are referring to in the "She's No Angel" promo when they say: "She was in Radley long enough to know Charles."

Many are under the impression they're talking about Aria here, but what if it's not her? What if cutting to her image was just a distraction to keep us from suspecting Lesli? You have to admit, it's definitely the type of stunt PLL would pull. For all we know, Lesli may have come into contact with Charles during his Radley days and, after his death, decided to seek retribution on his behalf to those who wronged him. It could explain why she gave the Liars such a cold look at court.

Is there a chance that I'm wrong? Yes. But one of the great things about this show is that every theory, no matter how insane, is still entirely possible. So regardless of who Lesli is, believe me when I say there's more to her than meets the eye. Consider yourselves warned.

For more A theories, check out Bustle's PLL podcast below: