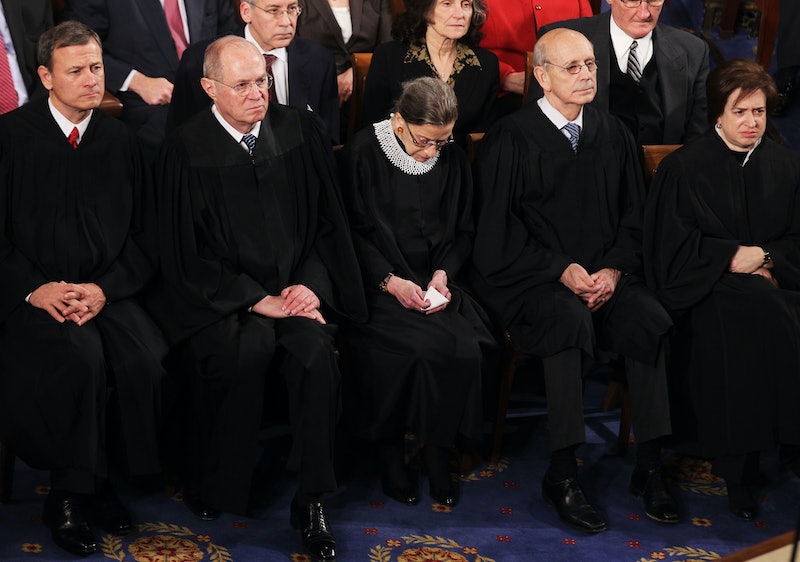 What a crazy (and amazing) couple of weeks it's been for U.S. legislation. While the Supreme Court has been super busy handing down rulings (and penning feisty dissents) on several important cases, we've heard decisions made on everything from gay marriage to EPA regulations. I know I'm not the only one who's lost some sleep over it all; but it's surely nothing compared to the overtime SCOTUS has put in. Luckily, they're about to head out for summer break — and have plenty of time to rest up. So what will SCOTUS be doing on their summer recess? I started to wonder...

The Supreme Court always wraps up their term in late June or early on in August (hey, they have 4th of July barbecue plans, too), and don't have to get back on the bench until October. In all of that downtime, they finally get to, you know, rest, relax, revisit favorite hobbies... all the good stuff summer brings. Of course, they probably want to get the heck away from one another, recoup from losses, and revitalize after securing important victories. So it's off with the robes and on with the bikinis and Speedos! (At least, so goes my wandering imagination...)

Poor Justice Alito. Instead of chilling out in the Virgin Islands with his buddies, I fear Alito will be nervously contemplating ways to protect himself from the backlash he fears, written in his marriage equality dissent last week. In his dissenting remarks, Alito wrote, "I assume that those who cling to old beliefs will be able to whisper their thoughts in the recesses of their homes. But if they repeat those views in public, they will risk being labeled as bigots and treated as such by governments, employers, and schools." (Psssst, Justice Alito. Did you know that it actually is bigoted to discriminate against gay people? So shhhhhh.)

Let's be honest, Breyer is over it at this point. After having his legitimate objections about the constitutionality of the death penalty called "gobbledy-gook" by not his most eloquent bench-mate, Justice Antonin Scalia, I'm guessing Breyer just wants to hang out and read People magazine on the beach for the next few months. Can you blame him?

Justice Ginsburg: Showing The Men Of Hollywood Who's Boss

The notorious RBG will likely be headed to sunny Los Angeles for her time off so she can school Hollywood directors and producers on their gender discrimination bullshit. Now that a big-time movie about Ginsburg's life is in the works, I doubt she'll be willing to tolerate anymore of the nonsense that the women working on the film have had to endure throughout their careers. So saddle-up, Tinseltown. I think you're about to get Ginsburged.

A Harvard Law School alum and former Dean of the same school, Justice Kagan most likely just wants to relax and get back to her Harvard roots this summer. I bet if we looked around we could find her with the hacky-sack kids, or harmonizing with the acoustic guitar guy. She might even crash in the dorms so she can really get away from all the D.C. drama. (Wise move, Justice Kagan.)

Justice Kennedy: Getting His Drink On

For a Reagan appointee, it's pretty unbelievable that Justice Kennedy made so many liberals insanely happy over the last several days. After signing on with marriage equality and stays for Texas abortion clinics, I think Kennedy is going to get his fair share of free shots at the bars this summer from folks wanting to thank him for making life a tiny bit sunnier just in time for summer.

Justice Roberts: Being Blissfully Oblivious To The Real World

But hey, I guess this isn't a whole lot different from what he does while he's on the clock with SCOTUS, right?

Justice Scalia: Writing His New Book, Weird Words And How To Use Them

In his backwards and super curmudgeonly dissents on marriage equality and the Affordable Care Act, Justice Scalia introduced the public to some very creative lingo last week. Now that he has a couple months off from work, he can settle in and really focus on his true passion: writing books on weird vocab words. Expect it in print and e-book this coming winter holiday season.

She definitely needs them after all the head shaking and side-eye glares she's had to give some of her fellow justices — particularly after the majority of them approved the continued use of a controversial death penalty drug. Sotomayor was none too thrilled about this, calling it the equivalent of being burned at the stake. Well, it is a difficult loss, but you're on vacation now, Justice, so better to relax and let it go till October.

Justice Thomas will probably spend at least the first part of his vacation icing a burn that was delivered to him by Larry Wilmore, who said that because of Thomas' ludicrous marriage equality dissent, the Justice should "approach the bench, then jump off of it." Better stock up, Thomas — you're gonna need some serious ice and extra sunscreen to treat that burn.