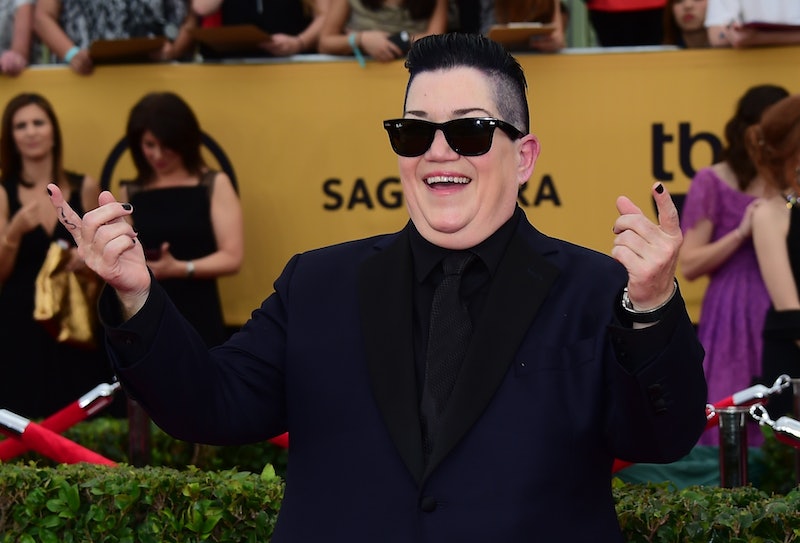 There's a lot that can be learned from every single Orange Is the New Black flashback. Not only do they give us details regarding how these ladies came to be in Litchfield in the first place, but they also provide further insight into who these characters are outside of these hallowed prison halls. And, while some of these characters' storylines are purely fictional, others are a direct imitation of real life, as is the case for Lea DeLaria's Big Boo backstory in OITNB. Her flashback paralleled many of the same obstacles the actress herself has been through.

“I really hope that my episode does for butch lesbians what Episode 3 of Season 1 did for the transgender world," DeLaria says. "I really feel like that Lauren Morelli wrote a brilliant episode that hit all of the points of what it is to grow up butch."

Much like how young Carrie Black ("Big Boo") was constantly sticking up for being her true self — and not the self her parents or society necessarily wanted her to be — DeLaria, too, has faced her own share of scrutiny, even within the LGBT world. "Not just the observation of your family, but also my own gay community considered me a pariah," she recalls. "So all of that is brought up and I personally think it’s great for kids to be able to see that."

Up until this point, the butch lesbian community hasn't really been given much of a voice within the TV industry, which is actually what lead DeLaria to take action and speak out.

I mean, when I made the choice to never be in the closet, when I started doing stand-up comedy back in 1982, I made that choice because I never saw anybody like me in the media. Therefore, until I was almost 15 years old, I thought I was the only one. And I pushed that secret deep down inside me. So my visibility as this individual and being who I am is my way of trying to change the world and my way of attacking hatred and prejudice.

And now, thanks to her and this incredible series, society can hopefully learn to better embrace the butch lesbian community, and come to the realization that there's a big difference between being wrong and being different.