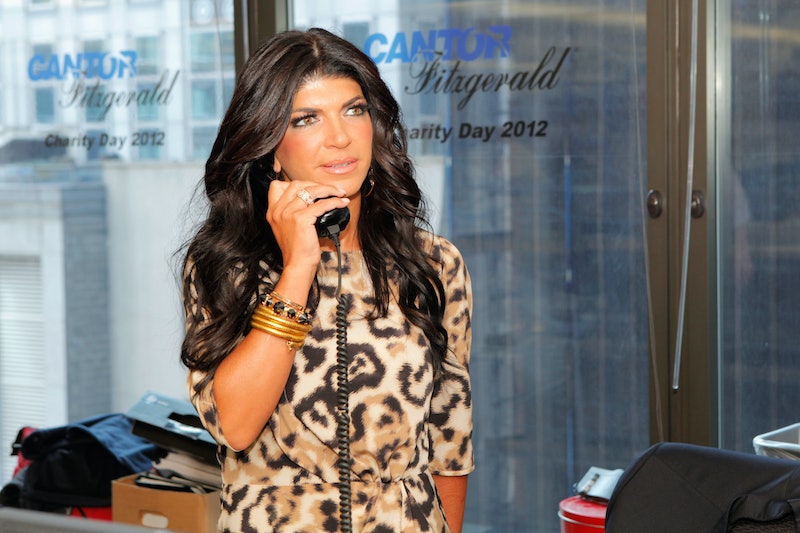 Call me crazy, but the more I watch shows like Orange Is the New Black, and the more I hear about what Teresa Giudice's daily life is like in prison, the more I feel like I could totally hack it behind bars. Now, don't get me wrong, that isn't an invitation for anyone to go combing through my past looking for reasons to frame me for murder, it's just a comment that all things considered, it seems like you could be way worse off than having to spend your days at a minimum-security facility.

Just look at Giudice, who's famous from The Real Housewives of New Jersey, but is currently serving 15 months at Danbury, a low-security federal prison for female inmates. Giudice was sentenced after pleading guilty to 41 (!!!) counts of fraud, and once she's finished serving her sentence, her husband Joe Giudice will begin serving his sentence of 41 months, an arrangement that the judge agreed to so that one parent would always be free to care for the couple's four daughters.

But in the meantime, Giudice is stuck where she is, so let's take a look at a snapshot of her daily life and consider jaywalking 20 times in a row so we can do some time, as well. I'm kidding (sort of), but she has a seriously cushy deal — check it out.

She Gets To Use Email

Whatever happened to being completely cut off from the outside world? What a great opportunity to catch up on your correspondence and achieve everyone's dream of getting down to Inbox Zero.

She Gets Weekly Visits From Her Family

My family lives on the West coast, and I haven't seen them since October 2014. MUST BE NICE.

She Can Shower Everyday

Real talk — sometimes I don't even get around to that.

There Are Exercise Classes

A source who claims to be a now-released inmate who spent time with Giudice at Danbury told Radar Online,

She fills [her days] up with exercise. She tends to do yoga and some other training in the gym. Then from 5:30 to 6:30 it’s exercise class.

You mean to tell me she gets free housing and a free gym membership? And gets to skip the post-work crowds? How am I not supposed to be jealous of that.

For as much as Giudice insists she's just trying to blend in, according to another anonymous inmate who spoke with Us Weekly,

All anyone is talking about is that woman — even the staff. The vultures who want to be her bestie were all over her.

Meanwhile, I have to reintroduce myself to people who have already met me two or three times.

Her Job Is Only Three Days A Week

And even though she's supposed to have 7.5 hour workdays, a jail insider insists Giudices is just wiping down tables for "15 to 20 minutes a shift," according to Radar's insider. Woof.

She's Made A Close-Knit Group Of BFFs

And apparently they do whatever she says! According to Radar's source,

There are three or four of them that are basically her little minions. They do whatever for her. She does have that small group that will always support her.

I can barely get people to wake up for brunch before noon.

According to Teresa's husband, Joe, his wife essentially has spa days with these ladies, the likes of which I haven't experienced since middle school days:

So help me god, this woman has her life more together in jail than I have mine together on the outside!

So... I'm starting to consider breaking into Danbury to stay for the month of July so I don't have to pay my rent. Who's with me??