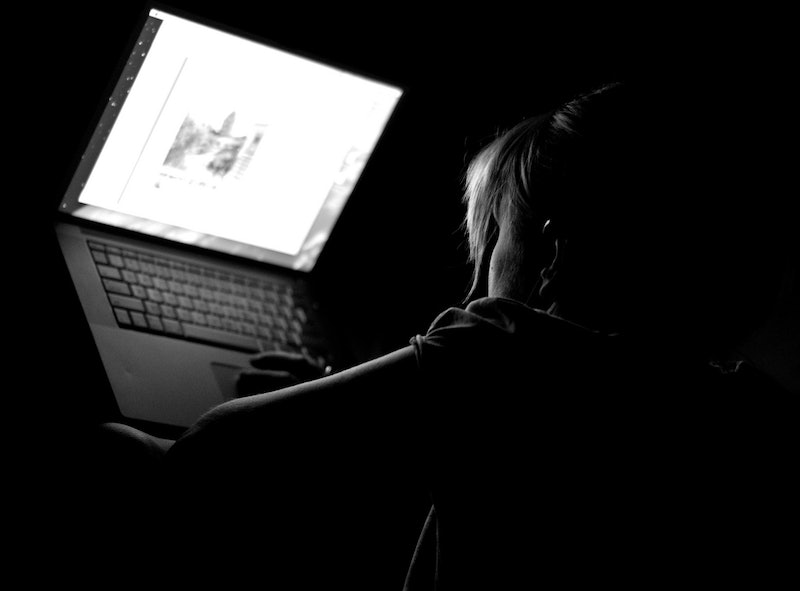 For any given form of entertainment, it doesn't take long for someone to A) use it to make porn, and B) find a way to make it scary. For that reason, it probably won't come as a huge surprise to hear that video games can be just as scary as horror movies, according to a recent study. Even though naysayers claim that video games can never be considered an art form the way movies are (because they clearly haven't played The Last of Us ), a study from Indiana University's Media School has found that we get just as engrossed in video games as we do in scary movies.

According to Science Daily, researchers surveyed 269 college students about various popular horror games, and surprise! The results of the study showed that almost half of respondents (44.1 percent) just can't get enough of that chill down their spine, reporting that they enjoy the feeling of being scared. Interestingly, many actually reported feeling more fear experienced through video games than through traditional media. "There a lot more of these anxious feelings … and an enjoyment of that fear," Ph.D. student and study author Teresa Lynch said, according to Science Daily.

Another finding unique to video games was that gender differences in the experience of fear were nowhere to be found. Previous studies have found that men and women experience fear similarly, but men are encouraged to shut it down, while women are encouraged to admit to it. Researchers believes that this gender difference disappears in video games because gaming tend to be a solitary pursuit.

"Our findings suggest that fearful or brave behavior during a fear-evoking experience may be a societal phenomenon," the authors wrote.

So what makes these video games so terrifying? The most frequently reported factors were "darkness, disfigured humans, zombies, and the unknown," according to the study. Furthermore, the more immersive games were seen as scarier. In contrast, natural disasters and vampires were counted among the least scary. If you're itching to feel your heart pound and your palms sweat, check out the following video games below. Some of them were specifically mentioned in the study; others are just based on personal experience. Either way, you might want to sleep with the light on tonight.

Frequently voted as one of the most terrifying survival horror games of all time, Amnesia begins with the protagonist stranded in the dark halls of a castle, memory wiped but for the knowledge that something is hunting him, and it only goes downhill from there.

If you've ever spent more than five minutes on the Internet, you're probably familiar with the Slender Man, a malevolent supernatural figure responsible for disturbing real-life consequences. Is it any surprise that the video game based on the legend is just as terrifying as the mythology?

Silent Hill is easily one of the most iconic horror series, known for its twisted monsters and eerie atmosphere, and Silent Hill 2 is a fan favorite.

Although we'll never get Silent Hills, the Guillermo del Toro-produced addition to the Silent Hill franchise, the playable teaser is both a game in its own right and a sad reminder of what we almost had. (WE COULD HAVE HAD IT ALL, KONAMI.)

Do you love the Alien movies? Do you love getting the pants scared off of you? Were you disappointed in Prometheus, the quasi-prequel to Alien? If you answered yes to any of the above, this is the game for you! Just don't play it before you go to sleep.

Although Call of Duty is hardly known as part of the horror genre, the Indiana University study found that respondents consistently ranked the "zombie mode" as terrifying.Images: bryanpearson/Flickr; Giphy