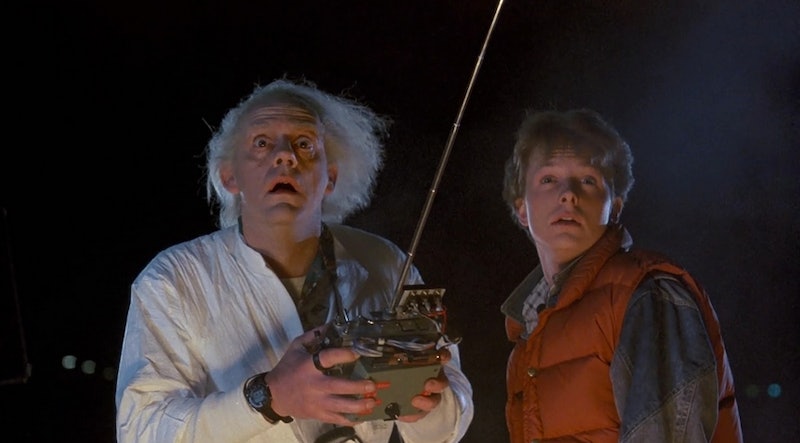 Something mysterious is stirring around Back to the Future(and sadly, it's not a hoverboard): A cryptic message from the ether (or, y'know, Universal) was discovered on the Internet today, what appears to be a Back to the Future poster boasting that "The future is coming" above the hashtag #BTTF2015. But what the flying heck does it mean? Are we getting a new Back to the Future Movie ?

Instinct or any experience with the habits of Hollywood has already led many to assume that this means that a Back to the Future reboot film is heading our way. And, of course, the question immediately arises around whether or not that's actually something we really want.

But that's the thing about this tease: It's really very, frustratingly unclear about what it means. There are numerous options here, and they range from the benign to the bizarre and from the cringe-worthy to the fantastic. They certainly chose an effective way to announce whatever it is: A graphic so vague that we have no choice but to speculate wildly until they decide to actually release the details about whatever the hell their plan really is.

So let's play into their hands; let's speculate. That is, after all, the fun way to do this.

At this point I just assume most things will eventually become Netflix series.

If they pull a Ferris Bueller and just stick Michael J. Fox in a commercial and call it a day like they did with Matthew Broderick for the 2012 Super Bowl, I'mma be so mad, I'm warning you now. Does it really count as a reunion if it's so blatantly selling us something?

Think Starkid productions like A Very Potter Musical . This one seems relatively unlikely since it was reportedly Universal who sent out the tease, but I'd be game.

A Return To Theaters

Think Titanic, and other films who've been tossed back into theaters during times when they were especially relevant decades after their release. It could be mass release (maybe in 3D?) or it could be special screenings coming to theaters nationwide. And there'd be something meta about watching the second Back to the Future film in a theater in 2015 as they explore the fictional version of 2015.

A Reboot Of the Franchise