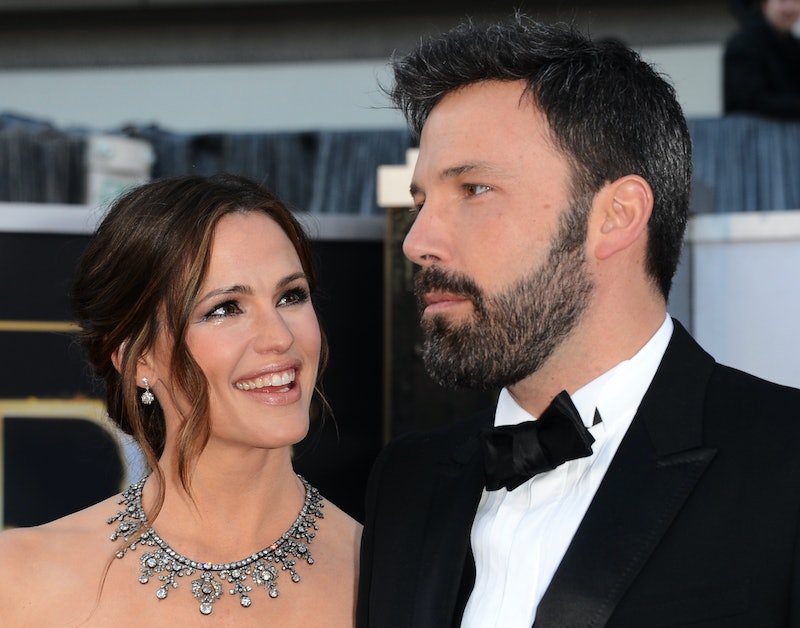 Working in celebrity news, I tend to take everything I hear about famous people with a grain of salt. There are just so many rumors out there that it's safer to just assume everything is false so you don't look like a big, gullible goof. This is why, when I heard Ben Affleck and Jennifer Garner

were breaking up, I didn't want to believe it. It was all rumors! Those weren't moving trucks at their house, they were there for renovations! Ben and Jen were great and their family was perfect and full of feminist lessons and soccer games! Well, looks like I overdid it on the salt this time, because Affleck and Garner confirmed that they're divorcing in a statement to People on Tuesday, and I'm left here overusing sad face emojis in messages to my coworkers.

As if the news of this split isn't hard enough to take — they were together for 10 years, people! — the wonderful people of the Interwebz decided this would be the perfect time to bring up a 2014 Vulture article in which the writer claims he found video footage of the moment Garner fell in love with Affleck. I was already familiar with this article, and let me tell you, this thing made me emotional even before I knew of the split rumors. I mean, it's a video of people falling in love. While I don't know if this video — which shows the Daredevil cast appearing on Dinner for Five — actually shows the moment that Ben and Jen fell in love, it's pretty convincing. LOOK AT HER FACE:

By this point, in January 2003, Garner and Affleck had know each other for a while because they met while filming Pearl Harbor in 2001. In 2002, when they filmed Daredevil, they were both in relationships; Garner with husband Scott Foley, and Affleck with Jennifer Lopez. Garner and Affleck made their first public appearance together in October 2004 — almost two years after the Dinner for Five appearance. Either this means they were meant to be and just needed to get the timing right, or they fell in love at a different point.

OK, not that, because that's from last year. But still. Whether or not they fell in love when Jennifer Garner made that face at Affleck, it doesn't matter. You know why? Because we still all have to be sad about this breakup.

If you really want to torture yourself, you can watch the full Dinner for Five clip below. (The face happens at 21:02.)

More like this
Long Live Bennifer!
By Allie Jones
The WAGatha Christie WhatsApp Messages Have Been Released — & They're Wild
By Sam Ramsden
Prince Harry Spoke Out About Archie & Lilibet’s Futures And What Worries Him The Most
By Sam Ramsden
Kaley Cuoco & Tom Pelphrey Just Made Their First Public Appearance As A Couple
By Hugh McIntyre
Get Even More From Bustle — Sign Up For The Newsletter