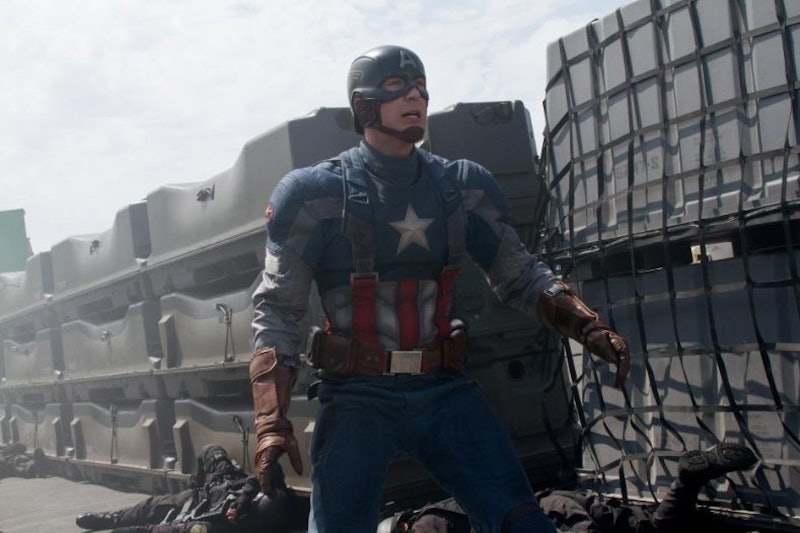 Ever since Chris Evans first donned the stars, stripes, and shield as Captain America, he has made himself a mainstay in the Marvel Cinematic Universe as the ultimate All-American superhero. The movies have been so entertaining that fans want to watch them again and again — but when will Captain America: The Winter Soldier be on Netflix? It needs to be there now.

Unfortunately, it's not, but it should certainly be there soon. Currently, the movie is available to rent on Netflix DVD, and it's also able to be watched on Google Play and Amazon. The film came out in April 2014, and, like other Marvel films, it hasn't yet made its way onto Netflix streaming. Still, the site has started premiering Marvel TV shows like Agents of S.H.I.E.L.D. and Daredevil, so introducing studio movies like The Avengers and Thor to streaming should only be a matter of time, especially seeing how much demand there is for their arrival.

And let's hope it starts with The Winter Soldier. Everyone has their favorite Captain America movie, but personally, between the two standalone movies, Captain America: The Winter Soldier takes precedence in my mind. The First Avenger was good, but this was one of the cases where the sequel excelled beyond expectations. Of course, Captain America: Civil War is well under way, and it could totally change the game. I'm pretty sure it will pave the way for more MCU movies for Evans to wield his shield, at the very least.

Yet audiences can't yet stream it online, and so what are fans supposed to do until then, or until May 2016, when Captain America: Civil War hits theaters, for that matter? Even though it's only a little short of a year, that movie's release seems like it's decades away. Luckily, Netflix has enough to keep our love for Captain America movies in check while fans wait for The Winter Soldier to arrive on the site. Here are seven movies that will satisfy your tastebuds for comic book films and, of course, Chris Evans:

The sci-fi indie stars Chris Evans as a different kind of hero — a reluctant one. It's a VERY different role than Captain America, but it's an equally awesome, albeit kind of crazy (and at times, gory) movie.

The ABC TV series has direct connection to The Avengers and had many tie-ins with the Captain America movies. Now's a better time than any to start marathoning the seasons.

Daredevil is another cog in the MCU machine, but unlike the movies, this show is gritty, grimy and not appropriate for all ages — and that makes it even better. It shows a different, darker side of comic book adaptations with some bloody good fight scenes by a masked blind lawyer vigilante. And who knows? We might see Daredevil and Captain America on the big screen together in the near future.

Shedding her jumpsuit and assassin skills as Black Widow, Scarlett Johansson jumps into a body-con dress and a Long Island accent for this role as Barbara Sugarman, a romantic interest for the title character played by Joseph Gordon-Levitt. It's a different kind of butt-kicking role, based on charm, not violence.

The anthology series about how technology is making us all horrible people is as depressing as it sounds — but it is absolutely fascinating. One of the most emotionally jarring episodes stars Hayley Atwell, who plays Captain America's first (and probably only) love, Peggy Carter.

Samuel L. Jackson plays Nick Fury, who is basically the glue that bonds all of the Marvel movies together, but in M. Night Shyamalan's unique take on the superhero genre (and one of Shyamalan's better films), he played the — spoiler alert — villain!

Having this irreverent comedy about America's favorite dysfunctional family on this list isn't as off-center as you think. For one, the Avengers are just as dysfunctional as the Bluths (this will probably be prevelent during Civil War when Captain America and Iron Man go head to head). Secondly, directors Anthony and Joe Russo of The Winter Soldier (and the forthcoming Infinity Wars movies in 2017 and 2018) helmed many episodes of the popular comedy, which showcased their unique storytelling skills.

You may not be able to watch The Winter Soldier on Netflix right now, but there are plenty of pieces of the Captain America movies and TV shows to tide you over until it hits the streaming scene.