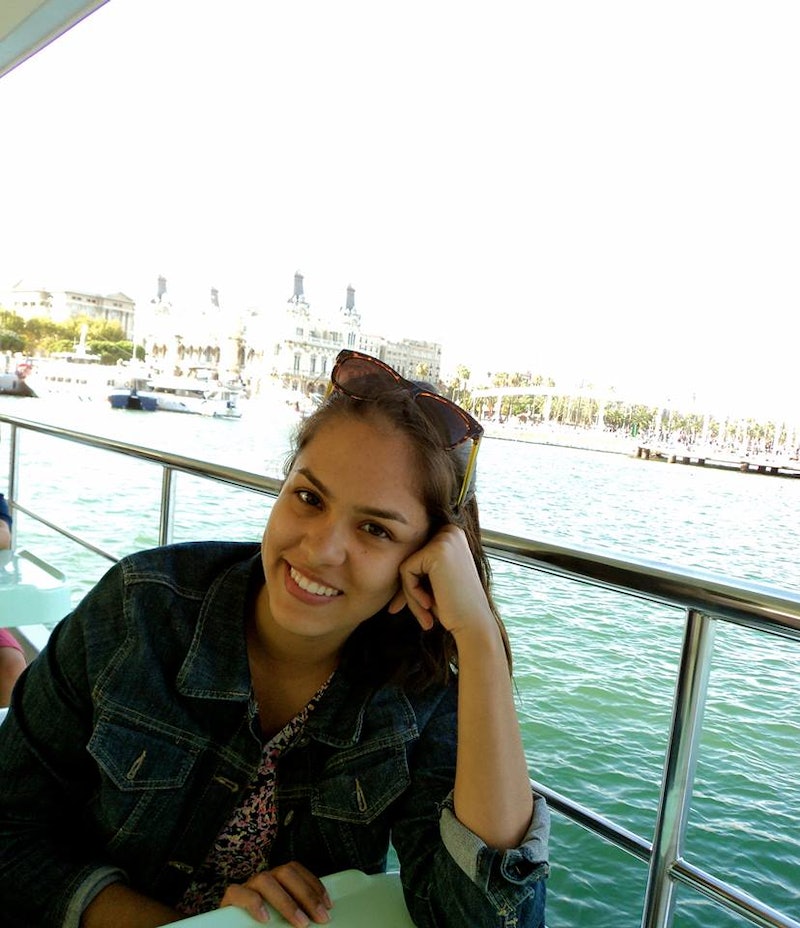 This past Christmas, I was invited to join my Spanish boyfriend and his family for a holiday dinner at their home in Barcelona. I was introduced as the American girlfriend studying abroad. I tried my best to exchange jokes in Spanish and to keep an open mind as unknown foods were ladled onto my plate. But — as I would soon learn — I was about to get a hasher lesson in cultural differences.

“How much do you weigh?” The mother of my boyfriend asked nonchalantly. By this point, we were well into our meal, though new dishes continued to appear. I swallowed my food. I glanced at my boyfriend. Needless to say, I was a bit taken off guard. The table had turned quiet.

“Um, I don’t know exactly. I don’t know how to convert it into kilograms,” I said, half apologetic, half incredulously, before giving an estimate about my weight in pounds.

My boyfriend got up, reaching for his cell phone, proclaiming, “Oh, I can convert it into kilograms!”

I didn’t know whether to start laughing hysterically or throw down my napkin and attempt to shake some sense into him. My boyfriend, of all people, didn’t even seem to get how weird and inappropriate this was for me. He was instead deciding to prolong this strange conversation. My boyfriend just offered to convert my weight into kilograms so his entire family will have a better sense of my measurements. Was this real life?

When my boyfriend announced my newly translated-into-kilos weight to his family, his mother commented that I didn’t weigh "that much". Not used to people commenting so liberally on such a personal subject, I wasn’t quite sure how to respond, so I decided to shrug. As the conversation changed topics, I was finally able to turn to my boyfriend and tell him Oh my god, in America no one would ever ask about your weight! As I told him how I had just experienced a major cultural difference, his cousin and her boyfriend both seemed equally surprised that asking such a question would be seen as strange or rude.

In America, there is an unspoken agreement that we do not discuss the weight or eating habits of others. It’s a taboo, really: a social norm engrained in our culture that can actually help perpetuate unhealthy behaviors regarding the act of eating. If I am having smaller portions, skipping dessert, or leave some food on my plate, my eating companion could interpret my eating habits as an insult to the cook, a possible eating disorder, a diet, or complete indifference to the food I am wasting. But Americans would likely never directly ask me about it. This speaks to our perception towards food: it’s something personal and potentially shameful — if eating habits are questioned, it’s simply rude.

While this seems normal to me, it is a uniquely American phenomenon. With our distinctive eating habits — big portions, endless consumption, and the often oblivious wasting of food — it was both fascinating and, well, weird to live in a different country where the culture surrounding food is the opposite.

I told her that in America, sometimes we leave food on our plate when we’re done with a meal. She looked at me, half smiling, responding simply, “no.”

While studying abroad this past year in Barcelona, I not only met my boyfriend, but also lived with a host family. Throughout my year abroad, my host mother casually mentioned my weight here and there, with comments ranging from “you look skinnier today,” to “the girl who lived here before you wasn’t as skinny as you.”

My host mom questioned why I sometimes left food on my plate, wondering if it was “maleducado” (rude), or if I didn’t like her food. I had never before been questioned about the food I left on my plate. I told her that in America, sometimes we leave food on our plate when we’re done with a meal. She looked at me, half smiling, responding simply, “no.”

After all, in Spain, food is not wasted. Food is saved and put in the fridge for tomorrow. Not done with that apple? Don’t you dare throw it out — into the fridge it goes! I explained to my host mother that I grew up with my parents telling me that if I’m not hungry anymore, I could stop eating. That answer seemed to satisfy her, yet I knew her mystification was not erased. I tried my best to eat everything off my plate after that.

I learned that while people in Spain will freely comment on one another’s appearance and eating habits, there doesn't have to be a negative connotation or intention to shame behind it. I was horrified when I heard one Spanish friend call another friend “fat” (can you imagine that happening here in America?), only to see them laughing and hugging at the comment. I realized that for them, fat is just a word, not an insult. It’s just not a big deal.

What is a big deal, however, is eating. In Spain, food is not eaten quickly while you’re walking down the sidewalk, balancing a huge mug of coffee in one hand and talking on the phone with the other. Instead, eating is a social activity, meant to connect you with family and friends while eating slowly, with manageable portions of fresh food from the area. Dinner is only ready when everyone has returned from work, and after the meal, there's always dessert and tea or coffee. And then there's more talking.

In a country where food is so important — with its direct association to family and slowing down and reflecting on the day — asking why someone left food on their plate or why they skipped dessert is the same as asking about their well-being. It seemed to me that asking about food and eating habits is simply another way of saying, I care about you. And in the end, that was actually kind of nice.

More like this
Meet The Spice Company Founder Who Sees Chai As A Metaphor
By Madhuri Sathish-Van Atta
25 Quotes About Love To Share During Pride Month 2022
By Madeleine Aggeler and Emma Garza
If Your Refrigerator Is A Mess, These 25 Organizing Products Can Help
By Courtney Young
Here’s What Sarah Jessica Parker’s Canned Cosmo *Actually* Tastes Like
By Emma Garza
Get Even More From Bustle — Sign Up For The Newsletter