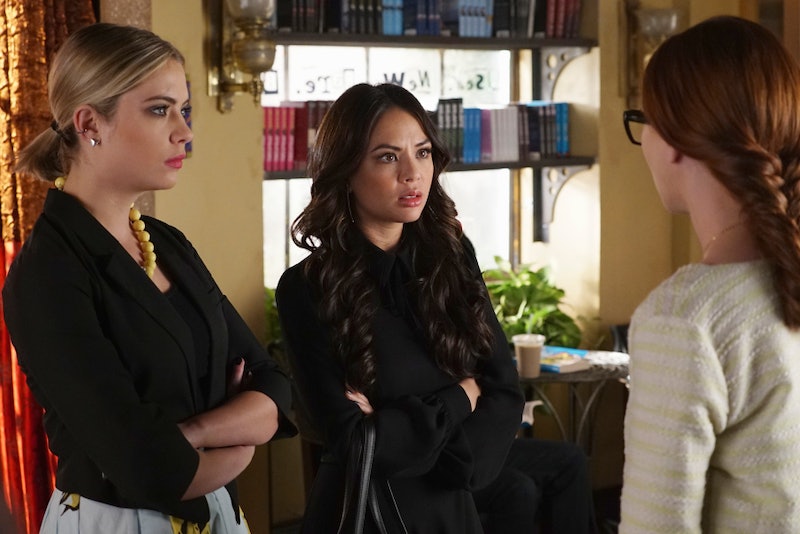 If you're anything like me, you're probably wondering how you're going to sleep tonight after seeing Dance Moms ' Maddie Ziegler on Pretty Little Liars . Sure, we all knew that this was coming — and we definitely knew that Maddie's guest-starring role was going to feature a seriously creepy, dream sequence dance party, but I can't say I was prepared for actually how creepy it was. And, while Maddie's dancing led Spencer to the room in Radley where Charles' file sat, waiting to be cracked open, it also forced PLL fans to ask yet another question. Who was the girl in Spencer's dream? And is it possible that Maddie Ziegler played young Lesli on Pretty Little Liars ?

Tuesday night's "She's No Angel" was a Lesli-heavy episode after the character disappeared shortly after Alison's trial began. And, considering we learned a major piece of information about Lesli's past with Radley, it would make perfect sense for young Lesli to have appeared to Spencer in her dream. (Also, is Spencer a psychic? She does her best A-related work in her sleep these days.) But, when you think about it, if it were young Lesli, why would she have wanted to lead Spencer straight to the file her older counterpart was trying to hide? Was Maddie playing Lesli conscience and trying to lead the Liars to the file so that they could expose her? Or was she purposely leading Spencer to Charles' dead-end file to distract her from finding out exactly what's been happening Lesli's past?

Really, the most important thing about Maddie's role on Tuesday's Pretty Little Liarsis that she got Spencer and Hanna to Radley, when Emily, Aria, and Mona were all leading them away from scoping out the now-closed sanitarium. For all we really know, Maddie could've been playing the younger counterpart of any of the characters on the series — possibly someone Spencer trusts or relates to most — or she was just a manifestation of Spencer's subconscious. Spencer knew where to look the entire time, she just needed a seriously creepy dance sequence to get her there. Either way, while Maddie's dancing, as always, was totally on par — I'm definitely going to need a nightlight tonight.

If you're feeling like you're the only fan with more questions than answers for Pretty Little Liars, talk through some of it with us on Bustle's podcast:

More like this
Conversations With Friends' Endometriosis Scenes Are As Brutal As It Gets
By Ivana Rihter
50 Years After Creating Her Alter Ego, Angelyne Is Still Driving That Pink Convertible
By Gretchen Smail
'Atlanta' Season 4 Could Be Here Sooner Than You Think
By Kadin Burnett
Grey's Anatomy Fans Refuse To Accept Kaimelia's Shocking Relationship Update
By Brad Witter
Get Even More From Bustle — Sign Up For The Newsletter