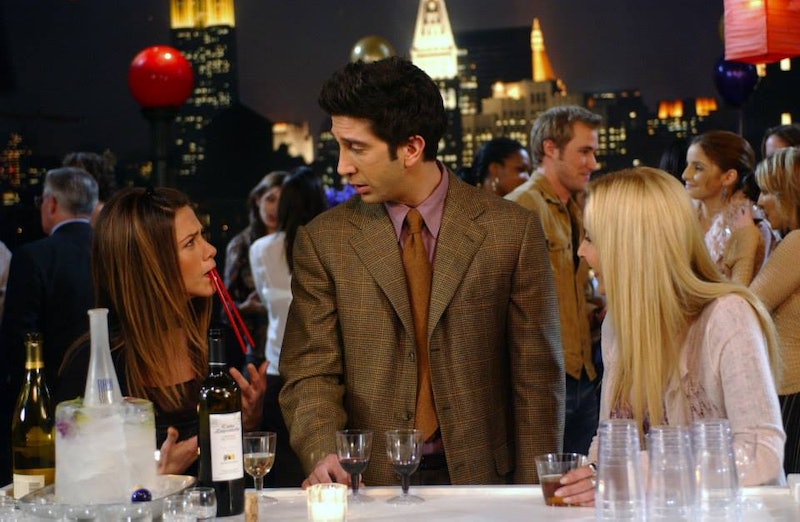 One of my favorite Friends episodes is "The One With Two Parties," in which the gang inadvertently throws Rachel two birthday parties, one for each of her divorced parents. Monica, of course, runs a classy and strict affair, while Joey and Chandler have a more fun time across the hall. Now that summer's in full-force and I've been watching a lot of the classic sitcom on Netflix, I wondered what kind of summer barbecue would each of the Friends would throw. Because you know each one of them would put their own spin on the concept. After all, this show is no stranger to a good shindig.

Friends has actually celebrated Rachel's birthday numerous times — in fact, the series saw the gang have a barbecue for the occasion back in Season 1, when she found out Ross was in love with her. It's an episode in which Joey and Chandler have the following classic exchange:

Chandler: Men are here!Joey: We make fire! Cook meat!Chandler: Then put out fire by peeing, no get invited back!

That bodes well for a Friends barbecue, don't you think? I think each of their summer parties would reflect aspects of their personality and be a blast — well, maybe not Monica's barbecue, although hers would probably be the most delicious.

Here's how I see the Friends celebrating summer:

I do love Monica's neat-freak nature and hyper-competitive ways when they're played for laughs. Much like in "The One With Two Parties," I can see Monica's barbecue being a very orderly affair that has perfectly placed balloons and streamers, Etsy-crafted party favors, meat cooked to perfection, and the burnt pieces thrown away. There may even be a Boggle tournament.

One thing always comes to mind when I think of Ross: Dinosaurs. So I bet that he'd have a dino-themed barbecue at a museum. He accidentally freaks out some of the kids by placing some of the dinosaur bones in the meat, but then he tries to convince them it's only beef and not actual meat from Jurassic World.

The fashionable Friend would have a fairly casual affair. Rachel seems to be the one who surprise parties get thrown for her, and not exactly the type of person who throws parties herself, so maybe Monica takes the helm on this one. Although, Rachel can serve her famous Thanksgiving meat trifle.

I feel like if we knew Chandler in 2015, he'd be a stay-at-home-and-watch-Netflix kind of guy. So I imagine his barbecue would be a booze and sarcasm-fueled marathon of hilariously bad summer movies, like Weekend At Bernie's (which is Rachel's favorite movie), Miami Connection, Sharknado, and anything else that most people are embarrassed to admit they enjoy. As for the meat, well, he can always order in some delivery dinner for the group.

Pheebs' barbecue would have mostly veggies on the grill — after all, she is a vegetarian. Activities would include a petting zoo that is well-meaning but gets out of control when the animals run wild, planting trees in a park that doesn't allow it, and Joey getting caught sneaking in meat. Whoops.

All meat, all the time. Sandwiches — Joey's favorite food — would be plentiful, and even grilled. There would be so much food. As there should be. Whether Joey would share it with everyone else at the party is a totally different story.

One thing is for sure though: I would attend every single one of these summer BBQs. Bring it on, guys.