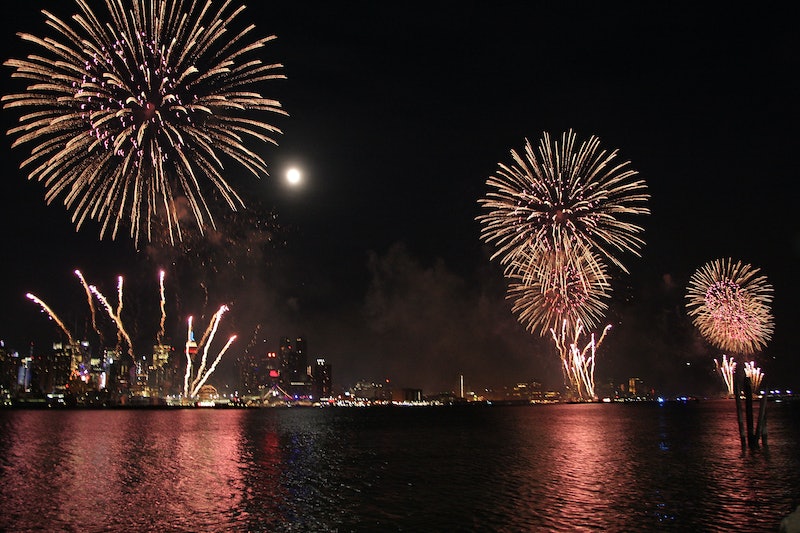 There's nothing quite like summer and there's seriously nothing quite like Fourth of July fireworks. They're just so fun to watch after a long, awesome day of barbecuing, swimming, beaching, and just having summer fun. But you have to plan all that revelry carefully to make sure you're home in time to catch the traditional pyrotechnics. So what time are the Fourth of July fireworks on TV? You can catch the Macy's 4th of July Fireworks Spectacular this Saturday at 8 p.m. local time on NBC. An encore presentation of the show will follow at 10 p.m., so you'll have another shot at watching the beloved Independence Day tradition if you happen to be out late on the holiday, because it's seriously one of the best around.

Plus, how lucky are we that the Fourth of July is on a Saturday this year? And that many companies are closed on July 3? This is setting the stage for Independence Day 2015 to be the most epic yet. The Macy’s 4th of July Fireworks Spectacular will also be pretty epic, featuring performances and appearances by Ed Sheeran, Dierks Bentley, Kelly Clarkson, Brad Paisley, Flo Rida, and Meghan Trainor. Plus, there will be 25 minutes of awesome explosions in the sky with so many cool colors and shapes. The star-studded event is surely not to be missed this year.

It's got stars, fireworks, and so much more. Here are some more reasons to be super excited about the Macy's Fireworks special:

Fireworks Are The Best

It's just not summer without them.

There Will Be So Many

According to NBC, more than 50,000 pyrotechnic shells and effects will be shot into the sky from several different barges on the East River in New York City.

They'll Be In 22 Different Colors

NBC said in a statement that the fireworks will be in SO MANY COLORS! Including new neon highlighter yellow, green, and pink. And they're all going to be awesome.

So Many New Cool Shapes

Shapes can be hit or miss when it comes to fireworks. Sometimes you can recognize them, sometimes it's not so clear. According to NBC, this year's display will debut fireworks in the shape of ghosts, blue and red octopi, crescent moons, patriotic stars, double hearts, roaring dragons, screaming banshees, purple rain, and spider webs.

All The Musicians Appearing Have Awesome Hits

All the artists on the special have had hit songs this year. Will Sheeran sing "Thinking Out Loud" or "Photograph"? Will Clarkson sing her "Heartbeat Song"? Trainor will probably be "All About That Bass" or "My Future Husband." Get ready to rock out.

It's The Best Part Of The Fourth Of July

Because after a long day of kicking off summer, you know you'll wanna kick back by watching explosions in the sky. Happy birthday, USA!

More like this
The Kardashian Forerunners
By Mariah Smith
Twitter Is Upset About The 'American Idol' Top 3 Results: "Who TF Is Voting?"
By Jake Viswanath
Selena Gomez Joked About Her Relationship Status In Her ‘SNL’ Monologue
By Grace Wehniainen
10 Eurovision Moments That Celebrate The Weird & Wonderful Camp Extravaganza
By Sam Ramsden
Get Even More From Bustle — Sign Up For The Newsletter