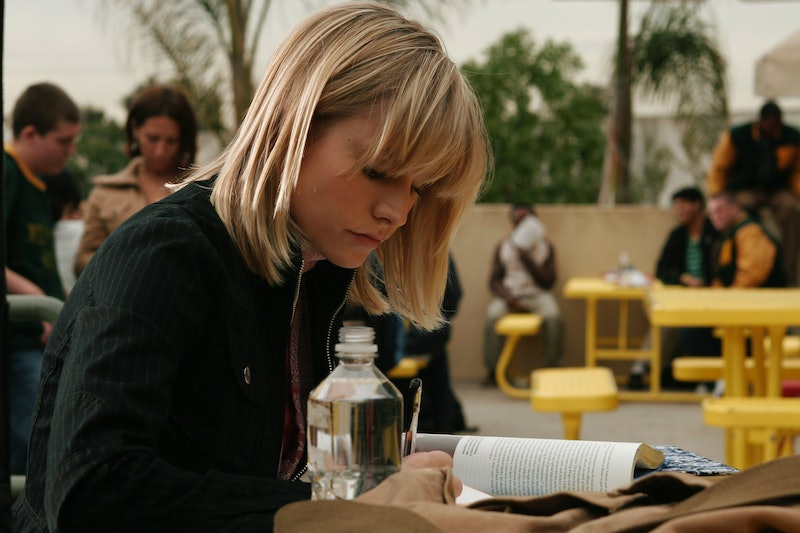 You might not have noticed it on your first watch, but the pilot episode of Veronica Mars perfectly embodied the spirit of Mondays in that scene during which Veronica was awoken from her nap on her desk to answer a question about life, and then immediately falls asleep afterward. I don't know about you, but I feel like I enter a zombie-like haze between Sunday night and Friday afternoon, where I just kind of shuffle through the weekday until it's finally the weekend again. Whether you're heading off to work or to school, the fact still remains that Mondays are a death wish upon your happiness and the party don't start until it's Friday night once more. Just like Veronica Mars summed up Mondays in one perfect scene, so too can you get through the week by simply channeling your favorite Veronica Mars characters on any given weekday. But which character is the patron saint of which day?

I don't think I need to tell people that it's basically a requirement to kick your week off with everyone's favorite tiny blonde detective, but what about the rest of the days in the week that just drags on and on and on? And, for that matter, what about the weekends? Since we think about Veronica Mars all year 'round regardless, we may as well use that to answer the very important question of which character we should follow in the footsteps of on which day. I, for one, know I won't be able to get through Mondays from now on unless I've got a handful of Veronica's sass to carry me through. But what about the other seven days?

Mondays are well-known for being the worst day of the week. It's the first day you have to get up early, the first day you have to do something other than stay in your pajamas and watch Netflix all day, and it basically just gives you the blues. You know how you get through Mondays? By pretending that you're Veronica Mars. Her confident strut, her take-on-the-world attitude, and the way she interjects wit and sarcasm into her every social interaction will make the day go by quickly. Veronica is always ready for a fight, and that warrior's spirit is exactly what you need on a Monday.

Tuesday is a frequently ignored day of the week. It's not quite as bad as Monday, but it's not the landmark that is Wednesday. It's basically underappreciated as far as days of the week ago, and that's pretty much Wallace's lot in life. Remember in Season 2 when he had a whole arc about defining himself outside of being Veronica's sidekick? That's the spirit that you need on Tuesday: the drive to make this day into something memorable instead of letting it blend into the bridge between Monday and Wednesday.

Keith Mars is a national treasure, one who taught us how to aspire toward the lower middle class. Thus, it seems only fitting that he embody the middle of the week. He considers himself an average man of average tastes, but we all know exactly how extraordinary he is. And there's nothing quite like getting through the day on Wednesday, and realizing you're at the top of the hill, leaving only a fun roll into the weekend to get through. Keith Mars is the first symbol that the fun is starting to arrive, but that we're not quite there yet.

Logan Echolls is exactly who you need on Thirsty Thursday. You know, because Thirsty Thursday is basically only a holiday for college students, and the rest of us just know Thursday by its infrequently used name: Not-Friday. Since Thursday is either that irritating day that refuses to just be Friday or the first indication of a party on the horizon, it's a perfect day to channel Logan. Are you going to be a pain in someone's behind today, or are you going to be a swoon-worthy Byronic hero perfectly suited to romancing Monday girls off their feet? It's a toss-up.

TGIF! Parties! Friends! Crazy antics! It feels like you've just gotten out of jail and you're in a rush to hit the latest hotspots. So, pretty much, you're Dick Casablancas every single day of his life. No matter what is going on, or what else he has to do, Dick's mind is on the next party, and on how he can make wherever he's being forced to be the most fun he's had in the last 24 hours.

You woke up late. You had dinner for breakfast. You're going to be out all night, and you're probably only going to tell your parents where you are. Is there anything in there that doesn't describe both Saturday and Lilly Kane? Of course, even if you wake up late and decide to stay inside all day, you'd still qualify as Lilly Kane. If you channel her, you automatically become fun personified, and you don't need to do anything to be having a lot of it.

The fun, lazy day of brunches and dreading the hours that pass because they're bringing you closer to Monday. Duncan is often accused of being the too-boring option in comparison to Logan, not helped by the fact that he spent most of Season 1 on medication that dulled his personality traits a bit, but there's nothing wrong with the vanilla boys of the world. When you're eating your brunch, preparing for Monday, and checking to see if Once Upon a Time is on tonight, you definitely want Duncan's focus on your side. Hopefully sans the whole dead sister thing.

Do you think you can face another week now? If you can't after this, not even Veronica herself can help you.

More like this
Jennifer Lopez Found The Perfect Ben Affleck Throwback Video For Mother’s Day
By Stephanie Topacio Long
Ryan Reynolds’ Mom Hilariously Tests His Patience In A Mother’s Day Video
By Brad Witter
Everything To Know About A Million Little Things' Reported Final Season
By Brad Witter
'Who Killed Sara?' Won’t Return For Season 4
By Brad Witter
Get Even More From Bustle — Sign Up For The Newsletter