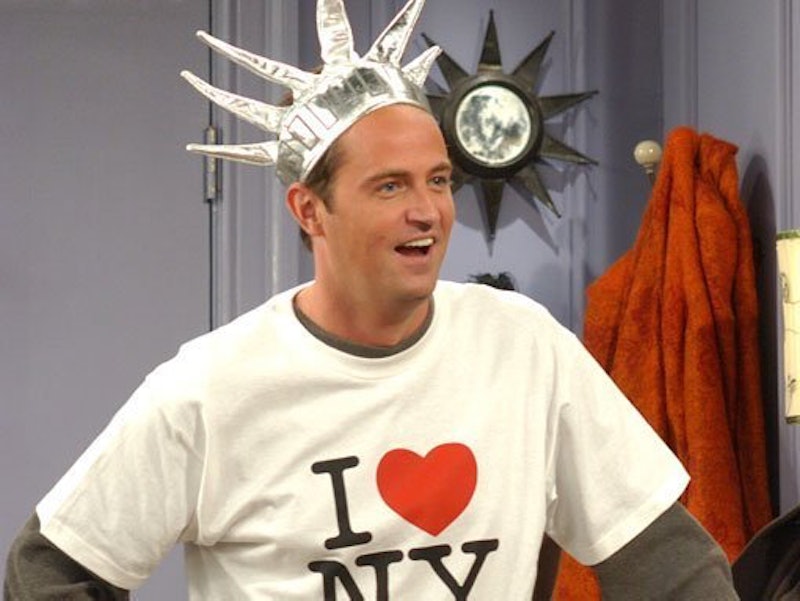 Friends definitely wouldn't be the amazing show that it is without the entire cast, but there's one member of the Friends who I think is totally under appreciated: Chandler Bing. And not just because of his dancing skills, either. Every member of the Friends crew is funny in his or her own way, but Chandler's sense of humor is my favorite. Although he's mostly known for his sarcasm, he's at his best when he's making fun of his friends. It's something we all do when we're as close to our friends as Chandler is to his, so even though he's a little mean sometimes, you can't fault him for it. Because above all, Chandler is just being brutally honest... and hilarious at the same time.

Don't get me wrong — it's kind of a problem that he deals with. Remember that time his New Year's Resolution challenge was not to mock any of his friends anymore? He may not have lasted very long, but I'm so glad he couldn't keep it in check. Without Chandler bringing the rest of the group back down to earth, their collective self esteem would be way too high. So, really, he's doing a public service.

Even though Chandler's best jokes are a topic I could talk about forever, I'll let Chandler take it from here. Here are some of my favorite times he called out his friends (and himself):

1. When Chandler Made Fun Of Joey For Saying Something Dumb

But really, Joey did try to charge Chandler for his fridge breaking... after Chandler moved out.

It's true. The rules to that game were ridiculous, even if Joey would have made an awesome gameshow host.

3. When He Mocked Monica For Her Horrible Persuasion Skills

She just wanted her apartment back, but Chandler was not budging.

4. When Chandler Was So Tired Of Ross Saying "Pivot"

And in that moment, Chandler said exactly what we were all thinking.

5. The Way Chandler Pointed Out How Stupid Everyone's Problems Are

Ross was upset no one showed up to his fake funeral. Really, Ross?

6. When Chandler Could Not Handle The Fake Story Of The Maccabees

That's my favorite part of the story, too.

7. When Chandler Wasn't Scared By Joey Jumping Out Of A Moving Box

Aww, poor Joey. He just wanted to surprise him!

8. That Time He Burned Himself

Because you shouldn't be allowed to dish it if you can't also take it.

9. The One When Chandler Was Reacting To Joey Getting A Turkey Stuck On His Head

10. When He Was Making Fun Of Rachel's Bubblegum Pink Bridesmaids Dress

Basically all of us anytime one of our friends gets gushy with their significant other. Chandler, I got you.