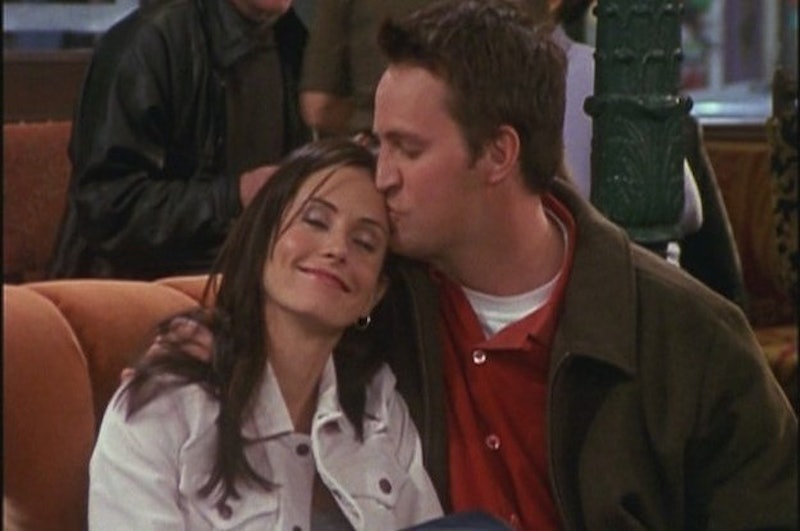 I have been an avid fan of Friends since it premiered in the '90s, and few characters have captured my heart quite like Chandler Bing. Joey Tribbiani may have known how to sweet talk the ladies and Ross Geller had the whole Ross/Rachel story arc going for him, but — in my humble opinion — Chandler reigned supreme on Friends as the best boyfriend (then husband!) a gal could ask for. Throughout the years, we watched Chandler's sharp wit compete with his admitted awkwardness, particularly when it came to love interests. As someone who considers herself to be a seasoned veteran when it comes to acting awkward during any romantic situation (hey there, fellas!) I can relate to all of Chandler's successes and stumbles in the dating world.

Chandler may have hidden behind his self-deprecating humor on more than one occasion, but when it came to having a genuine friend to lean on and making someone smile, he was always "there for you." As a single woman (again, hey there) who has had her fair share of crass casanovas, smooth talking sailors, and a litany of others who always managed to send me spoon-first into a pint of chocolate-peanut-butter-what-have-you, I've come to truly appreciate the bashful ingenuity that is characteristic in all the Chandlers of the world.

So, let's take a look at how Chandler Bing is the best boyfriend of all time.

He's Got The Moves

Whether it's the moment a good song comes on, Chandler's got the moves and he knows how to bring it.

Seriously, could this guy be any funnier?

He's Able To Admit His Faults

It's never easy to admit when you're in the wrong, and even Mr. Bing may balk when you initially call him out on some bull. Regardless, he always manages to own up to things before the credits roll.

He Can Be Assertive When He Needs To Be

Chandler isn't a big fan of confrontation. However, if he needs to put his foot down on something like having his seat taken (seriously, learn to respect when someone calls "fives") he won't be a doormat. Oh yeah, don't take his doormat, either.

Chandler was the proud owner of a duck and a chicken, which are not exactly low maintenance animals. Just picture how great he and your domestic shorthair, Marshmallow, will get along. (Spoiler alert: They will get along famously.)

In fact, he'll join you!

He's As Nervous As You Are

Is there anything that can conjure more neuroses than someone giving you butterflies? Chandler's adorable awkwardness can't be contained, which makes it impossible for him to play games or attempt to sweet talk you.

He's Not Afraid To Say "I Love You"

OK, I take that back. Chandler is terrified to say those three magic words — but, he still does it in spite of all his fear, and that's pretty inspirational.

Hey Chandler, could you be a better boyfriend? No, you could not.