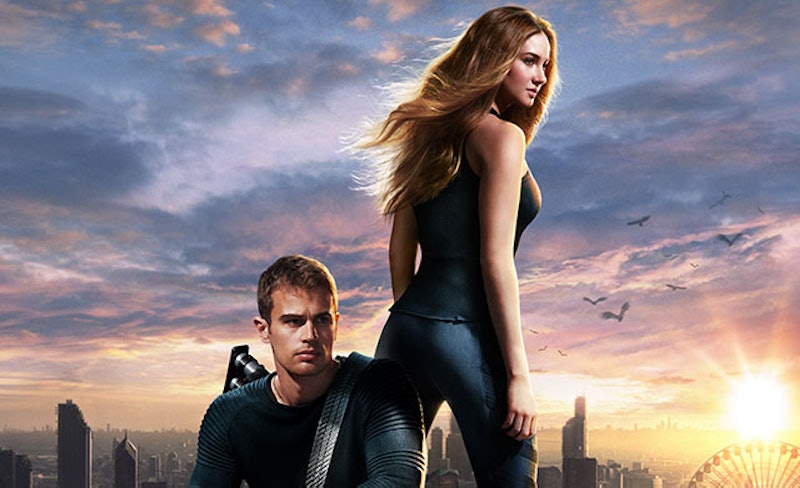 I will be the first to admit: I'm a fully functioning adult woman (for all intents and purposes), and I love my YA, especially the Divergent series. So, like many other people, I'm impatiently waiting for the movies to be available to watch online. But when will Divergent come to Netflix? It's been forever — seriously, the second film, Insurgent, already came out in theaters, and the first one isn't even available for streaming yet! (It is, however, available on Netflix DVD. But I want to watch it now, not in 24+ hours when it comes in the mail.)

If you need any proof of how unfair this is, The Hunger Games was streaming on Netflix as of January 2013 — less than a year after it was released in theaters. And its sequel, Catching Fire is currently available to stream now. So where is the love for Divergent and Insurgent? There are no clear answers as to when either film will be available for streaming on Netflix, although there are murmurs that the first movie may be streaming in late 2015, perhaps this December. It would make sense — it came out in March 2014, and while a 18-month or so wait time might be long, it's pretty average for Netflix releases.

In the meantime, until Divergent does start streaming, you're more than welcome to come to my place and whine with me about all the reasons you just want to be able to watch it right this second. Here are a few of mine:

1. The Films Are Based On An Award-Winning Book Series

Anything based on on a YA dystopian novel is like catnip to me. In line with movies like The Hunger Games and The Giver, the Divergent films were derived from young adult novels by Veronica Roth in which the protagonist faces a tyrannical government and social injustice. Haven't read the books? Go do it — they're page-turners and great summer reads.

2. Shailene Woodley Has Me Fangirling

I have a serious crush on Shailene Woodley. She's a fantastically versatile performer, a remarkable human being, and probably the only person to be able to pull off a pixie cut since Mia Farrow. Also, her character Tris is a badass. Like, with a capital B.

Speaking of woman crushes, I will never stop being in awe of Kate Winslet. In every film she's ever been in, she commands attention every time she steps into frame. Divergent is no exception — Winslet is bone-chilling as Jeanine Matthews, the sinister leader of the Erudite faction. And she rocks a blue business suit like nobody's business.

4. The Soundtrack Is Addictive

The Divergent soundtrack features songs from many notable artists, across a range of different genres. You'll hear tracks from Tame Impala, Pretty Lights, Ellie Goulding, and a melange of other amazing musicians.

5. Four Has The Best Tattoo Ever

In addition to being portrayed by the undeniably gorgeous Theo James, Four is a wonderfully complex character who represents the multifaceted nature of personality. This is depicted on his body as a tattoo that spreads across his back, featuring the symbols of the four different factions. Designer Andy Nicholson explained that complex tattoo was constructed to look touchable, telling EW that the design was about "following the lines that your hand might follow if you're feeling someone's back." I could definitely stare at Four's tattoo for an hour. Or four.

Netflix, hurry up! Divergent is a streaming must-see.

More like this
This 'Hunger Games' Alum Will Star In A New Medical Drama Titled 'A Mistake'
By Alyssa Lapid
One Powerful Quote In 'Doctor Strange 2' Is Going Viral On Twitter
By Alyssa Lapid
10 Must-Read New Books Out This Week
By K.W. Colyard
'Bridgerton' Star Nicola Coughlan Confirms Season 3 Will Focus On Colin & Penelope
By Grace Wehniainen and Alyssa Lapid
Get Even More From Bustle — Sign Up For The Newsletter