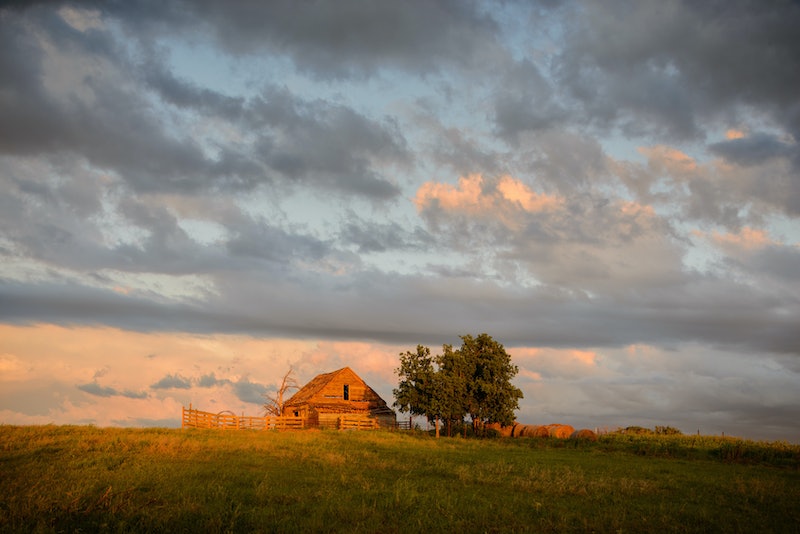 I grew up on Laura Ingalls Wilder. The Little House books and Little House on the Prairie TV show were some of my favorite entertainment growing up. When my mom made the decision to homeschool me, The Prairie Primer — a large, spiral-bound book of lesson plans for teaching the nine Little House books to elementary school students — was one of our first stops. Two years later, I hadn't just reread all the books: I'd studied them.

For me, Little House was a way of life. I wanted to be Laura and Mary Ingalls. Mom was enabler to my wholesome family fun obsession. She'd fix corn fritters — which I loved — or fried apples and onions — which I didn't — and listen to my plans for going on a Wisconsin-to-Missouri road trip, following the Ingalls family's movements across the plains states.

In short, I was the poor counterpart to the Laura Ashley girls of my generation. Our pioneer spirits may have been dampened by the realities of laundry — Let's just say it's hard enough with a machine, OK? — but that doesn't mean we don't still carry lessons from the Little House with us. Laura Ingalls Wilder taught me all about how to be a badass. Here are the top 10 life lessons we learned from her.

Be Brave and Embrace Change

To say that the Ingalls family moved a lot might just be the understatement of the decade; in less than 30 years, Laura moved from Wisconsin, to Kansas, to Wisconsin, to Minnesota, to Iowa, to Minnesota, to Dakota, and then finally to Missouri. Laura Ingalls Wilder lived a tumultuous existence — in which money was lost, people died, and her sister Mary was blinded by scarlet fever — yet still, life went on. Reading about her adventures in the Little House books taught you to be brave and embrace whatever changes come your way.

You aren't always going to have it all, and that's OK. That's how life is supposed to be. The Ingalls clan never had much money or material possessions — remember when Laura and Mary played with a pig bladder as if it were a balloon? — but they knew how to cherish life's little moments. True badasses know that happiness doesn't come from lots of money or fame, but from having a warm cup of tea, a cat to hold, and someone to make you laugh until your face hurts.

Do What You Can

Trying to make the most of a bad situation doesn't mean handling it all on your own. Giving up is the only way you can possibly fail, so just keep moving forward. When something went wrong in the Ingalls family's life, they didn't just sit down and let their problems overtake them. Instead, they picked up stakes and moved on to the next opportunity. So whether you're trying to live on ramen noodles, struggling to pay off your student loans, or looking for a new place to set up shop, remember that all you have to do is what you can.

Be As Productive As Possible

Whether you realize it or not, Farmer Boy taught you how to be productive on a badass level. Each member of the Wilder family rises before dawn and works all day to make the farm a success. Almanzo's mother bundles like tasks each day of the week; she doesn't worry about laundry except on Laundry Day. Making sure that one task gets complete while you ignore the rest is much better than trying to do everything at once, and going to bed with a completed to-do list will make you feel accomplished, even if tomorrow's to-do list is twice as long.

Grit Will Get You Far

Laura Ingalls Wilder had to have spunk and perseverance; there's just no other way to survive harsh pioneer conditions. Grit is the quality that makes some people dig in their heels while others raise a white flag. Some people say it can't be taught, but I think a lot of us learned it from reading the Little House books.

Make Your Revenge Quick and Clean

Remember that time in On the Banks of Plum Creek, when Laura scared Nellie Oleson into muddy, leech-infested waters? We all know she had it coming, after those snotty remarks about the Ingalls family's economic situation. But notice how quick and how clean Laura's revenge is. She doesn't continually berate Nellie, even though that would have, in all honesty, been sort of fair, given how persistent Nellie's bullying was. But no, Laura just scares her into the leech-pit and then delights in the schadenfreude. And that's it. Revenge achieved.

Laura became a schoolteacher at 15, an age at which I was writing emo songs for my future band and planning to become a professional piercer. As you can see, 15-year-old Me's career choices didn't exactly pan out. But Laura's did! She started out teaching students who were older than she was, and she continued to teach for the next four years. Even though she was nervous, Laura, like every true badass, knew how to trust in her own abilities.

Never Be Your Main Squeeze's Side Piece

Shortly after Laura and Almanzo began courting, she found out he was taking Nellie Oleson for buggy rides as well. Having none of it, Laura tells him, "If you want to take Nellie for a drive, do so, but do not come by for me." Considering he wasn't even seeing Nellie in a romantic way to begin with, Almanzo could have been a real jerk about Laura's assumptions. Instead, he calls on Laura the following Sunday, like the amazing, perfect guy he is. The moral of the story is this: badasses are never be afraid to tell their partners exactly where they stand.

After her original manuscript, Pioneer Girl, was rejected by publishers, Laura spent years retooling it as a series of children's books. Today, not only are the nine Little House books worldwide bestsellers, but a scholarly version of Laura's original manuscript is also available for the first time. Laura Ingalls Wilder didn't become a published journalist until 1911, and she didn't become a published novelist until 1932. The journey toward her dream career was long, but Laura taught us that our dreams are worth the time and effort they take to achieve.