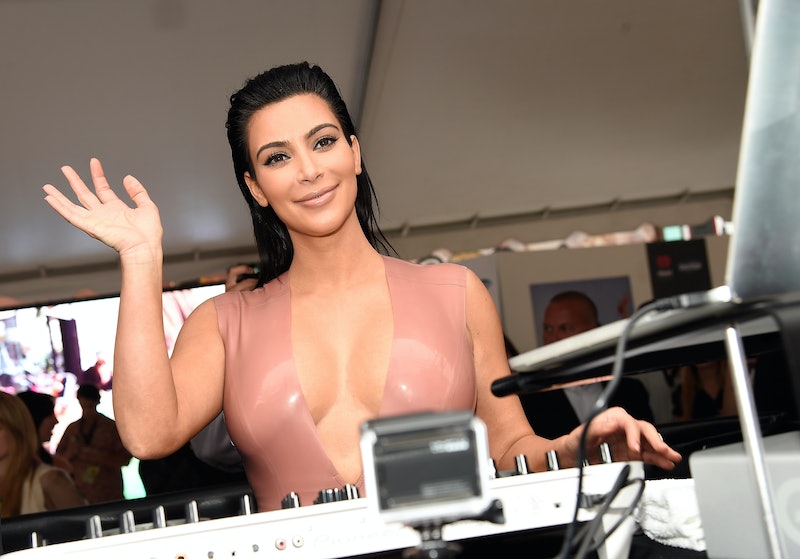 Kim Kardashian appears on the cover of the latest issue of Rolling Stone in a sailor outfit complete with a thematic hat and ample cleavage next to the words "Kim! Inside Her Real World." But how much of her "real world" do we really get to see? Based on a preview of the interview the magazine shared online ahead of the issue's July 3 release, not too much. Or at least, no more than we see on Keeping Up With the Kardashians, the entire point of which is to show us the Kardashian family's "real lives." And this point is made the most clear if you look to the section where Kim Kardashian talks about feminism.

When talking about feminism with Rolling Stone, Kardashian keeps things so convoluted that I would find it very hard to believe she wasn't doing it on purpose:

"I've never really been one on labels, and I don't like to push my view," Kardashian says. "If I feel something, it's how I feel. I never say, 'I feel this way, so you should feel that way.' Not that there's anything wrong with it, but I just am who I am. But, yeah." She smiles. "I think you would call me a feminist."

This reads to me like the words of a robot that was programmed to become the most successful celebrity ever. This is not to say that Kim Kardashian lacks personality or interests or is incapable of feeling human emotion, but rather that she knows how to keep all of those things under wraps when necessary and is so practiced in saying the "right thing" that she sometimes comes off like a computer algorithm come to life. If I was asked in an interview that would be read by millions of people my thoughts on feminism, I would stumble over my words; Kim sounds like Siri. That is, until you get to the addition of "She smiles" and are suddenly able to picture a robot suddenly having a human-like gleam in its eye. In that instant it feels like the machine is smarter than us and is posed to takeover the world.

Which is exactly what is — and has been — happening here with her massive success and fame and wealth. I don't doubt that Kim Kardashian is a feminist, but more than that I don't doubt that she shies away from labels in order to please as many people as possible. If she doesn't call herself a feminist, she doesn't have to worry about backlash from people who are either against feminism or are just afraid of the word. In fact, this isn't the first time she's been this vague when talking about the f-bomb. Kardashian was asked whether she considers herself a feminist when speaking with Variety in April. She responded,

I get asked that sometimes. I guess. I think other people would. I don’t put a lot of labels on anything. I’m not really the biggest activist. I really don’t like to ever make people feel like they have to be a certain way or believe what I believe or act like how I act. I guess you would say so, but I’m not going to be one that’s going to stand up and yell that I’m a feminist and this is the way you have to live and you all have to be equal. I’m never one to preach something to other people.

Obviously, this is a lot more than a simple "yes" or "no" answer. Kardashian wants YOU to be able to paint the person YOU want her to be on to her yourself. If she wasn't always wearing head-to-toe Balmain, she'd be better suited to just wear a green screen — much easier to project right on to her that way.

And this doesn't just come into play when she's avoiding being labeled as something. Kardashian is open about the fact that she likes interacting with her fans on a level that many celebrities don't and how she allows them to influence her. In an interview with Bloomberg Television's Cory Johnson in May, she talked about how she communicates with her fans on social media and takes their input into her business ventures into account:

If I'm working on a new fragrance, and I have all my ingredients out and we're trying to come up with what the new bottle will look like, I like to use that as kind of a focus group. And I'll send out maybe a picture and say, hey guys, which color pink should I use, the one on the right or the one on the left?

Kardashian has manufactured herself in such a way that she gets to be the most exposed person out there with her reality shows, social media accounts, numerous interviews, and a 448 page book of photos of herself, but still keep her "real world" hidden — at the very least when it comes to her thoughts on different matters, feminism being one of them. So sure, I'll call Kim Kardashian a feminist, but that's because I'm a feminist. I'll also call her the famous racially ambiguous beauty icon the world was missing, because I'm biracial. And I'll call her one of the best dressed celebs, but only on the days her style looks good in my eyes.

What will you call her?