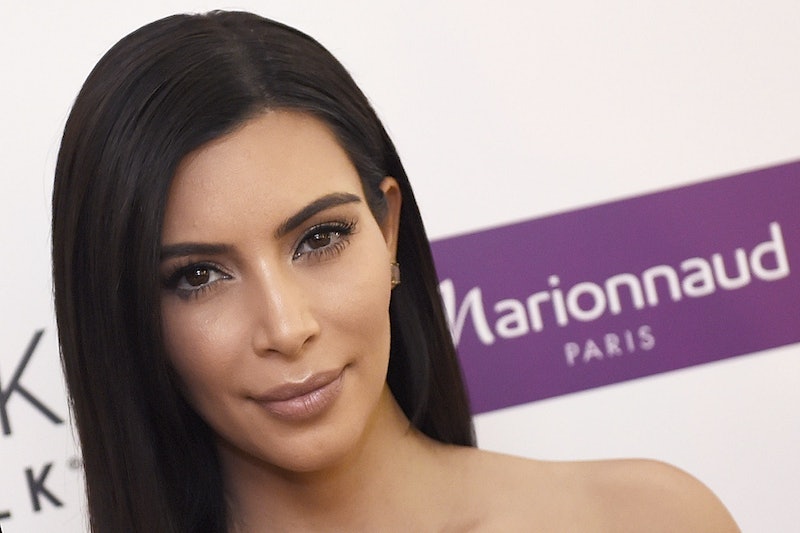 Feminism. Sadly, it's a controversial topic and one that many women want to avoid, especially when it comes to calling themselves feminists. By no means do I think women have to label themselves feminists, because we are all entitled to our own opinions and living our lives how we want. However, I wish more women would shine a positive light on feminism, rather than adding fuel to the fire that it's a negative thing. For example, Kim Kardashian's views on feminism are just plain confusing and, once again, show that calling yourself a feminist can be bad — when it definitely is not.

While chatting with Variety at the publication's 2015 Power of Women Luncheon in New York City on Friday, Kardashian spoke about feminism, and the Keeping Up With the Kardashian star does not consider herself a feminist. She explained after being asked if she would call herself a feminist:

I get asked that sometimes. I guess. I think other people would. I don’t put a lot of labels on anything. I’m not really the biggest activist. I really don’t like to ever make people feel like they have to be a certain way or believe what I believe or act like how I act. I guess you would say so, but I’m not going to be one that’s going to stand up and yell that I’m a feminist and this is the way you have to live and you all have to be equal. I’m never one to preach something to other people.

As for whether she believes in the equality of men and women, yes, Kardashian absolutely does, but she doesn't believe in labels. She elaborated,

I mean, I definitely think that way and believe that way. But I’ve never been a label person to where I’m like, “I am a feminist.” Because I think that sometimes people... I don’t know. I’ve never been one to, even if I believe it, I don’t want to feel this is what I’m doing and this is who I am: be like me. I feel like if you’re not, that’s fine too. I’m just really supportive of everyone — even though I believe that things should be equal, people have different circumstances in their life that have taught them to be who they are. Even if I don’t agree with them, I don’t judge them. I’m a really non-judgmental person.

OK. So as for her first quote, just because someone calls themselves a feminist doesn't mean they are forcing everyone to be a feminist and will try to make everyone believe in their views. That's not how it works. Is calling yourself a feminist, especially as a high-profile person, a way to raise awareness about one day finally having equality between men and women? Yes. Is it a "label" that means you must go out and force feed others your beliefs and then turn them into a feminist? Absolutely not.

Moving onto Kardashian's second thought. Again, if you call yourself a feminist that does not mean you are telling others to "be like me." You are just standing up for your beliefs, letting your voice be heard, and promoting gender equality.

With that said, I appreciate Kardashian not bashing those who do consider themselves feminists. She says she is "supportive of everyone," which seemingly includes feminists. The reality star doesn't appear to be a judgmental person, and nor do I think she is judging feminists for their beliefs, but the way she sees feminism is disconcerting, to say the least.

As for why she doesn't define herself as a feminist, well, maybe it's the same reason she doesn't call herself a role model. She told Variety, "I don’t really look at myself as a role model because of some of the decisions I made. But I think that I learned from my mistakes and I try to do better." She added, "I don’t like to throw things in people’s faces. I work hard, and I’m proud of myself. I know my husband’s proud of me, my family’s proud of me. I hope my daughter’s proud of me."

So Kardashian doesn't consider herself a role model or a feminist, because she doesn't want to throw it in peoples faces? Or is it just her way of ensuring she's not alienating others? This is another part of Kardashian's interview that's confusing. I disagree that if you consider yourself one thing that doesn't meant you're projecting it onto others or excluding those who don't have similar beliefs.

Do I wish she would have said more in support of feminism? Absolutely, because she has such a strong fan base and many women of all ages who look up to her. Like many other famous faces, including the amazing and feminist Emma Watson, Kardashian could do feminism good.