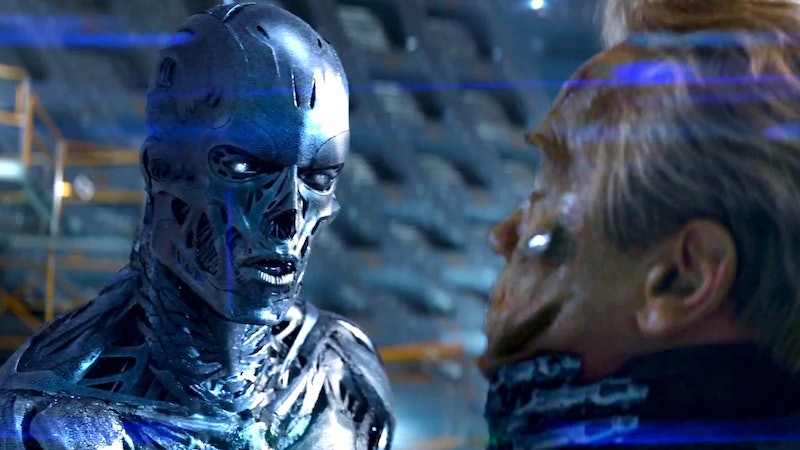 When you're going to see an action movie, staying in your seat for the post-credits scene is a no-brainer. Practically every big blockbuster these days comes with an extra finale, but as for the quality of these scenes, they tend to vary. Some are amazing, providing a great afterward to the movie and setting the stage perfectly for the impending sequel; others, meanwhile, cause little more reaction than "I stayed for that?" Thankfully, the Terminator Genisys post-credits scene falls smack into the first category. Fans of the Schwarzenegger-led franchise: this one is definitely worth the wait.

It's not available to watch online, so a description for you (spoilers to follow): in the last few minutes of Terminator Genisys, July's newest addition to the sci-fi franchise, viewers watch as Skynet is destroyed by Kyle Reese (Jai Courtney) in an explosion, and the mission complete, he reunites with Sarah Connor (Emilia Clarke). It all seems like a perfectly happy ending — maybe a bit too happy for an action movie. It's only after the credits begin rolling that we see what really is in the cards for the characters — and it doesn't look good.

In the scene, it's revealed that the T-5000 actually survived the explosion at Skynet, and its hologram form (Matt Smith) is very much alive. He looks over the damage, and that's all we get; the screen goes dark a moment later. It's only a short sequence, but a very ominous one; in the next Terminator sequels , the Genisys system will likely have a bigger, scarier role.

And in some ways, that's actually pretty great; not only does it mean more drama and excitement in the movies to come, but it also means more Matt Smith as the films' evil villain. The guy best known as Doctor Who wowed in his time on-screen in Genisys, and an expanded role in future films will allow him to show off his acting range even more. His return might not be quite as thrilling Sarah, John, and the others, of course, but there's no question that more Genisys means more entertainment for fans.

So far, not much else is known about the sequel (and even this is just an educated guess), but there is some info about what's to come. According to ScreenRant, the next movie in the stand-alone trilogy is set for May 19, 2017, and the final one is planned for June 29, 2018. The two films are scheduled to be filmed back-to-back over the course of nine months in 2016, and Schwarzenegger has confirmed that he'll return for another round. The other stars haven't as of yet, but it's still early; there's definitely still a good chance that Emilia Clarke and Jai Courtney will announce that they're on-board in the coming months.

While we wait for more detail on the new movies, it's a help to know that we at least have that post-credits scene to keep the material fresh in our minds. So when you go see Terminator Genisys, make sure you stay all the way through the credits, because you won't want to miss this. It's the perfect preview of what to expect from the upcoming films, and the exciting end to a film that Terminator fans could want.