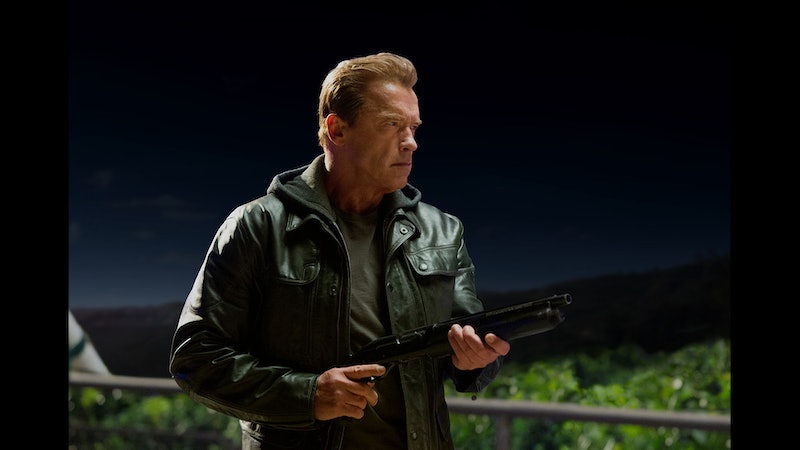 Let's start out with a spoiler, albeit a pretty obvious one: in Terminator Genisys , the good guys win, and it's a triumph for humanity and free will. Bet you didn't see that one coming! The new movie cranks up the volume in the first ten minutes, replete with explosions, grand visual and audio effects, and it keeps up the pace for its entire two-hour duration. The casualties: many buildings, much California infrastructure (sorry, Schwarzenegger), a villain or two. But audiences quick to leave the theater will miss out on a key scene — one of the subtlest, and therefore spookiest, in the film — in which the villain actually revives himself. In a post-credit scene, a hologram of Matt Smith emerges from the rubble of the Skynet research facility and surveys the damage. He flickers for a moment, and the screen goes dark. The implication is clear: He'll be back. In other words, the movie seems to give an answer to a very big question: will there be a Terminator 6 ?

Backing up for a minute, just for context: in the fillm, Kyle Reese, played with suitable naivety and tentative optimism by Jai Courtney, travels back from 2027 to 1984 to protect Sarah Connor, the always-awesome Emilia Clarke. For Connor has already been established in the Terminator franchise as the hope of the future — the mother of resistance leader John Connor (Jason Clarke, taking over for Christian Bale). As Reese leaves his own present, though, he witnesses John Connor's assassination at the hands of Skynet, a computer operating system turned anti-human defense system embodied by Matt Smith. Reese makes his way forward in time in order to kill Skynet in its cradle, blowing it up before it goes online. He succeeds, he thinks, driving off into the sunset with Sarah Connor, and it's a seemingly happy ending.

But wait: there's that foreshadowing post-credits scene, and Cinema Blend confirmed late last year that Genisys is the first in an upcoming Terminator trilogy. The next installment is slated for May 2017, while the third is planned for a June 2018 release. The franchise has undergone quite a metamorphosis since the original 1984 James Cameron-directed film, not the least of which is the 30-year aging of its star Arnold Schwarzenegger. But filmmakers are keeping their cards close to their chests for the next couple of films — even the plot for Genisys was very closely guarded until its release was imminent. Genisys clearly does a lot of foregrounding for the films to come, so with that in mind, we have a few hypotheses for what to expect in 2017 and 2018.

The Doctor Who star only appears on screen for about five minutes in the flesh, but considerably more as the voice of Skynet. And, as he's the last one standing in Genisys, filmmakers are clearly preparing for him to take on a greater part of the narrative thrust in films to come. No complaints here — he plays the endearing Doctor and cold, calculating Skynet with equal skill, and his moments on-screen were some of the brightest in Genisys. His character sets up for a more profound examination of the nature of artificial intelligence, something that's only cursorily seen in this movie but is quite in vogue at the moment, as seen in recent films like Chappie, Ex Machina, and Robot and Frank.

This is already on-track for development, with a report from SlashFilm indicating a likely 13-episode season. It has been compared in concept to Marvel's Agents of S.H.I.E.L.D., a way of fostering a totally immersive Terminator experience. Fox tried this out in 2008 with The Sarah Connor Chronicles, but the show only lasted two seasons before it went off the air. Here's hoping the new show is better-fated.

But here's a real spoiler alert. Seriously, stop here if you haven't seen the film yet. Schwarzenegger's aging Terminator is nearly terminated himself in the final countdown of Genisys, but ultimately gets upgraded when he falls in a vat of artificially-intelligent slime. He jokes throughout the film that he's "old, not obsolete" — though his aging starts to show as his parts start to fray and he's taken down by newer Terminator models. This eleventh-hour plot development ensures that the Terminator will really be back, more unstoppable than ever before.

Terminator Genisys is a pretty straightforward film, but it does its share of setting up for the franchise to come. It's a shame that this happens at the expense of more thoughtful investigations into the nature of intelligence — whether artificial or human — and a coherent time-travel narrative for the moment, but the filmmakers have definitely left themselves the wiggle room to present this down the line. There are some really clever nods to the original Terminator films, including three different Arnies, but Genisys does a lot more looking forward than looking back, so we await the next installment to see where it goes from here.