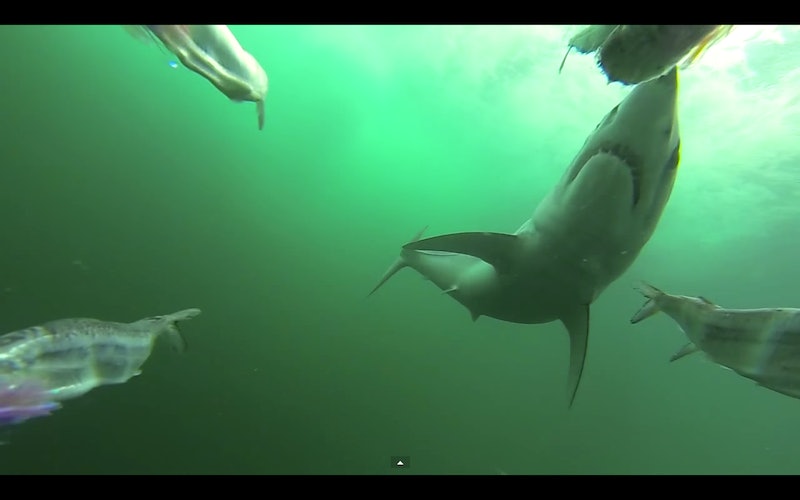 Whether you live every week like it's Shark Week or are just celebrating the 40th anniversary of Jaws, you're going to want to spend the week of July 5 missing out on the summer weather and watching seven days and hundreds of hours in front of the Discovery Channel. This year, Shark Week has a mission: to teach fans what a mako shark is. Mako sharks, unlike the extinct megalodon, are a real category of sharks, that can be found all over the globe. There are two types of mako, the shortfin (also called a blue pointer) and longfin, that both can be found in the Pacific Ocean.

Shark Week has gotten in trouble in the past for fudging facts, but mako sharks are the real deal. These creatures are going to get a spotlight during Shark Week this year, and after you do some research on them, I don't think you'd want to meet one while going for a leisurely swim. The big centerpiece of the mako shark's appearance will be on Sunday, July 5 with Monster Mako , described by Discovery as a two-pronged adventure documentary where teams of researchers trying to decode both the mako's speed and their form of attack.

I love sharks, and I'm happy that I just went to the beach because I don't think I'll be able to go back there for a long time without looking over my shoulder expecting a mako shark. Makos prove that Shark Week isn't for the faint of heart, and even after all these years it still has the capacity to be scary. Here's what you need to know about the species ahead of their Shark Week debut:

1. They're The Fastest Sharks In The Ocean

Makos can reach a speed of up to 60 miles per hour — comparable to a cheetah's speed on land.

2. They're Worshipped By The Maori

Pacific cultures like the Maori came up with the name for makos, which means "shark." (So, calling it a mako shark is basically like calling it a shark shark.) A respect for the big fish permeates the Maori. To the Polynesians, sharks were guardians and protectors, a source of food, and their teeth were used to make cosmetic items like necklaces as well as knives.

3. They Have A Unique Migration Pattern

The New Zealand Herald recently reported that researchers have found makos have a migration pattern that takes them over eight thousand miles in a year, which may ultimately save these fish from extinction — because scientists can stop them from being overfished if they know what parts of the ocean makos will be in at different points in the year.

4. They Can Jump Incredibly High

I'm sure you've seen footage of great white sharks jumping out of the water. But, the smaller makos put those jumps to shame. If you've ever wanted to see a dolphin crossed with a killing machine, congrats: You'll love mako sharks.

5. Their Teeth Give Great Whites A Run For Their Money

While nothing can match the great white's size, makos also have rows of razor sharp teeth that they can use to rip and shred their prey.

6. Technically, There's No Reason To Fear Them

I know, I know — the rest of this article is all about how makos are the new bad boys of the shark world, and now I'm saying the exact opposite. But, it's true. According to Sharksider, "There are no attacks on humans recorded from shortfin sharks," while "longfin sharks have attacked humans before," but solely in the context of commercial fishing, from being caught in nets or on hooks. Mako sharks may be scary, but ultimately they're just like other sharks — no threat to humans at all.