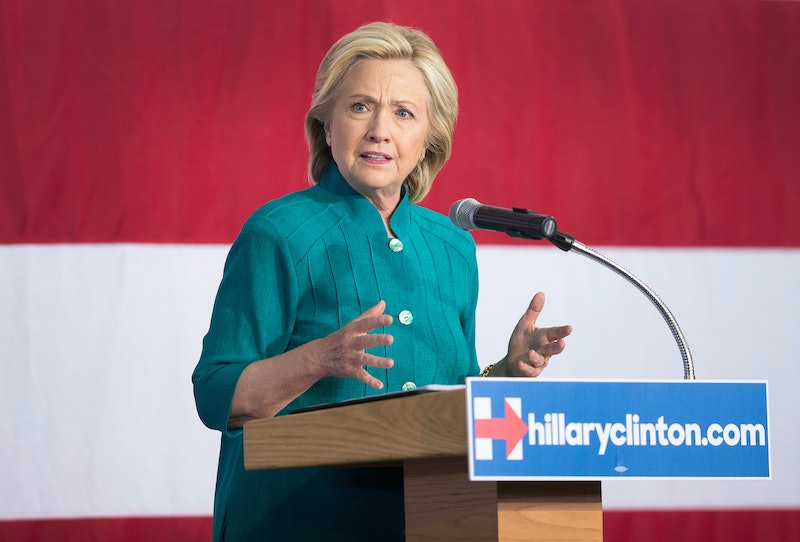 On Wednesday, Hillary Clinton's campaign announced that her 2016 campaign has raised more than $45 million in the first quarter of the race, largely from small donations. Is Clinton's $45 million a record for presidential campaign fundraising? That's an absurd amount of money to receive in only three months, but, in fact, presidential races are expensive — in the 2012 race, Obama and Mitt Romney each spent more than $1 billion, and the 2016 election will likely cost even more.

Clinton's millions weren't all from wealthy donors as the high figure might suggest — her campaign tweeted that 91 percent of all the donations were $100 or less. So, the majority of her support came from average Americans, not the uber rich or super PACs. This is good news for her campaign; it shows that she has widespread support.

Clinton tweeted a picture of a handwritten thank you note to her supporters Wednesday that said, "Thank you so much for being part of this campaign. I'm grateful for all you've done and excited for what comes next. When the road ahead is tough you need the best people by your side. That’s why I’m thankful for you."

Clinton outdid herself in 2008, raising almost $10 million more than the $36 million she received during the first quarter of her 2008 presidential campaign, a record at the time. The $36 million included $10 million transferred from her Senate committee though, so it wasn't entirely money raised specifically for her campaign. President Obama broke that record in 2011, when his re-election campaign raised nearly $43 million in a single quarter. Each presidential race seems to reach a new record, and Clinton's $45 million is an all-time high for three months of fundraising, setting the stage for an expensive two years of campaigning.

Other 2016 candidates haven't announced their first-quarter fundraising numbers yet, so it's possible that someone raised more than Clinton. The Democratic runner-up, Bernie Sanders, raised a shocking $1.5 million in the first 24 hours of his campaign, proving that he has enough support to be a viable primary candidate. His donations are also mostly in small amounts, averaging around $44 each, according to his campaign.

Jeb Bush is the most likely to beat Clinton's $45 million record in the first quarter, as some expect him to raise as much as $80 million. In March, Bush's campaign was receiving so many donations, that his staff reportedly asked donors not to give more than $1 million right away, according to The Washington Post. The main difference between Bush's donations and Clinton's is that his are largely from wealthy super PACs, reportedly leading his advisers to worry that he isn't reaching enough voters. There's a lot of money in the 2016 election already, and spending records will probably continue to be broken as the race progresses.

More like this
What Is Barack Obama’s Net Worth? He Makes *Way* More Now As An Ex-President
By Hugh McIntyre
5 Crystals To Manifest More Money
By Megan McCarty
What Is Jeanie Buss' Net Worth? The Lakers President Is Uber Rich
By Hugh McIntyre
The Richest 'Bling Empire' Cast Member Is...
By Hugh McIntyre
Get Even More From Bustle — Sign Up For The Newsletter