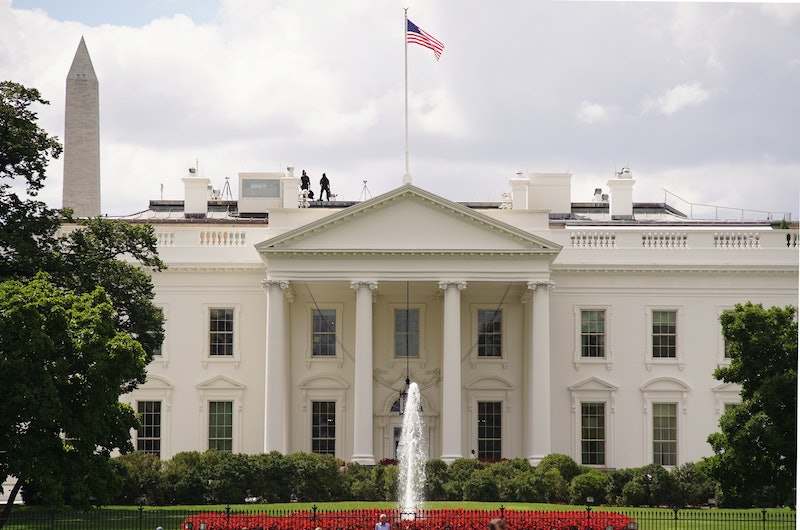 After 40 years, the White House finally lifted its ban on photography during public tours on Wednesday. Phones and compact still cameras with a lens are now permitted on the tour, and the White House is encouraging tour goers to use the hashtag #WhiteHouseTour to share their experiences on social media, according to The Hill. But, large, obtrusive objects such as tripods and selfie sticks still won't be permitted, so tourists will have to get their selfie on in the old-fashioned, extended-arm style. Too bad this ban hadn't been lifted just before the last White House Correspondents' Dinner, because we would've loved to see White House selfies from so many of the past guests.

First Lady Michelle Obama broke the news with a video on her Instagram account, where she says, "If you’ve been on a White House tour, you may have seen this sign,” and she holds up a sign reading, "No photos or social media allowed. Your cooperation is appreciated." Obama then rips the sign in two as she says, "Well, not anymore," according to the The New York Times. Every year the White House hosts a dinner for major media outlets and their guests, who often include celebrities, musicians, and, recently, social media personalities. With this ban lifted, attendees of the dinner, also referred to as "Nerd Prom," will finally be able to take selfies in the White House. We really hope that these past White House visitors return and take some of the best selfies known to humankind.

Can you imagine what kind of amazing, hilarious material Colbert could have produced had he been allowed to take photos during the 2006 White House Correspondents' Dinner? The impersonations of Bush, the jokes about Bill Clinton and the Oval Office — the opportunities would have been endless.

Her mirror selfies and pic stitches would just be on point. Really, who could do a White House mirror selfie better?

Koenig attended the 2015 dinner, but didn't post any photos of herself there. She should go back ASAP and take photos or a short video of herself exploring the White House or looking for something suspicious and then set it to Serial's music, at least in my humble opinion.

Beyoncé and Blue Ivy visited the White House in January 2014 to attend Michelle Obama's 50th birthday party, according to Elle. The epicness of a Carter and Obama family picture in the White House is too much to handle.

The President himself hasn't ever posted photos of himself inside the White House, and now it's about time that he did. We want funny dad selfies, Obama!

More like this
What Is Barack Obama’s Net Worth? He Makes *Way* More Now As An Ex-President
By Hugh McIntyre
Taylor Swift, Kerry Washington & More Speak Out On Uvalde Mass Shooting
By Jake Viswanath
How To Support Gun Control Reform Right Now
By Morgan Brinlee and Carolyn Steber
10 Times Diana & Meghan Spoke Similarly On The Royal Family
By Sophie McEvoy
Get Even More From Bustle — Sign Up For The Newsletter