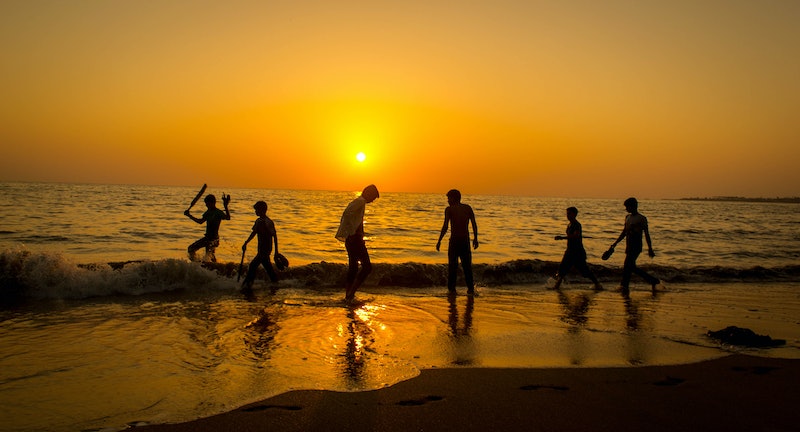 Everyone knows that those lazy, hazy, crazy days of summer are the best days to catch up on all the reading you've been meaning to do. I mean, there are only 1 million lists to guide you. From the beach to the pool, there's definitely no shortage of summer book recommendations, and those glorious three months will fly by while you have your nose buried in the pages before you know it!

Summer is so romanticized that it's not only known for its prime reading time, but also for its music. There are tons of songs that are so summery, the season would just feel incomplete without them. From Bananarama to Luke Bryan, and Justin Timberlake to Nat King Cole, you know you have a favorite. "Summer Girls" by LFO just won't die for me, but, hey, to each her own.

Because summer, music, and books all go hand in hand, here are 10 books you'll enjoy most this season, based on which classic song of summer is your tried and true favorite.

If you think of it in terms of Daisy and Gatsby, even Nick Carraway, this song is just creepy. But you can't have a list of summer songs without Bananarama, and you can't have summer reading without Gatsby and his parties and Daisy and her dresses. They were careless people with nothing to lose. Cruel summer, indeed.

"School's Out" by Alice Cooper : Aristotle and Dante Discover the Secrets of the Universe by Benjamin Alire Saenz

The end of the school year, a hot summer, a new budding friendship, and a pickup truck: could a book BE more essential coming of age summer if it tried? No, no, it could not. It's would pair perfectly with Alice Cooper's "School's Out" because during this summer, Dante and Ari really feel like summer might never end, like school just might be out forever.

"Suddenly, Last Summer" by The Motels : A Hundred Summers by Beatriz Williams

It's a classic summer read: two best friends spend a lifetime of summers in an idyllic summer town. Those best friends grow up and apart. One friend steals the others fiancee. A Hundred Summers takes place after all the hurt has come and gone, and Lily Dane is forced to face the two people who hurt her the most once again. Lily is immediately brought back to that one fateful summer — and just like that it's "Suddenly, Last Summer."

"Those Lazy-Hazy-Crazy Days of Summer" by Nat King Cole : This One Summer by Jillian and Mariko Tamaki

Rose and Windy spend summer after summer together growing up and learning about the world. This One Summer takes place during one of those summers, when the girls come to realize there is so much more to life than their little summer world. They spend day after "lazy, hazy, crazy" day learning about themselves, each other, and the people around them, but they won't always like what they're learning.

"Summer Girls" by LFO : We Were Liars by E. Lockhart

It's just not summer without a throwback to 1999 and LFO's "Summer Girls."The Liars might romp in 2014, and they might not be wearing Abercrombie & Fitch, but they are the girls — well, friends — of summer. They're the best group of friends you could ask for. They reunite every summer and every summer it's like nothing has changed. The friends are perfect and complicated, beautiful and strong, but they have secrets, too.

"Summer of 69" by Bryan Adams : Tigers in Red Weather by Liza Klaussmann

The lighthearted summer anthem, "The Summer of 69" captures everything summer should be. And, if you ask me, Tigers in Red Weather is the essential summer novel. You can feel the possibility that summer brings with it in the voices of all of the characters, and, just sayin', the book goes through every year from the 1940s through — you guessed it — 1969. A match made in heaven.

"Drunk On You" by Luke Bryan : Maybe Someday by Colleen Hoover

Sometimes summer comes and you just want to escape reality and fall into someone else's complicated love life. I don't blame you. Luke Bryan certainly doesn't, because he just about wrote the summer love anthem when he wrote "Drunk On You." This one practically begs to be read from the beach, "a little drunk on you and high on summertime," echoing through your brain as you fall into the world of Sydney, Hunter, and Ridge.

"In the Summertime" by Mungo Jerry : The Rumor by Elin Hilderbrand

Elin Hilderbrand is the queen of the summer book. Summer reading welcomes her back this year with The Rumor: the story of two outwardly flawless friends and their families, but of course, things aren't as they seem. Things are falling apart, and Nantucket is feeling smaller and smaller as the rumors are flying. But, like good old Mungo Jerry always says, "we're not bad people, we're not dirty, we're not mean. We love everybody, but we do as we please."

"Summer Love" by Justin Timberlake : The Truth About Forever by Sarah Dessen

If you grew up loving Justin Timberlake, you know that undeniably, "Summer Love" is a classic, every year. Sticking with the childhood classic theme, Sarah Dessen was a must-read growing up for so many readers that we can't help but revisit them again as adults. For your next #TBT, grab this Dessen favorite off the shelf, and live once again through the summer romance of Macy and Wes.