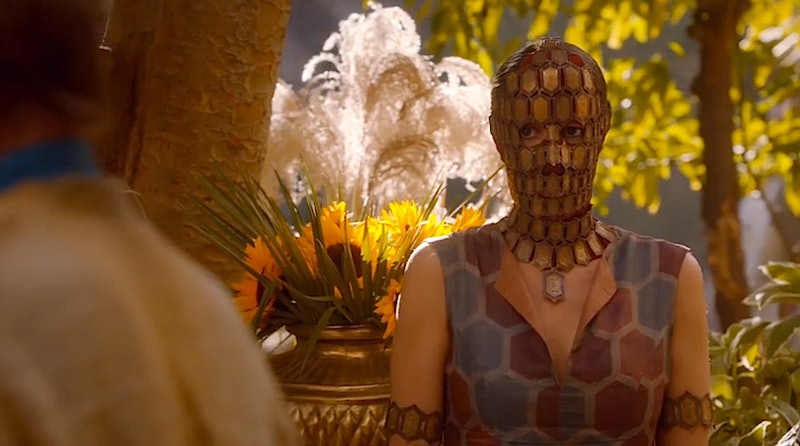 I've always been pretty good at remembering difficult names — a skill that I assure you came in handy during my whole Harry Potter obsession while growing up. (OK, fine. I'm still just as obsessed as ever.) But the point is, those were some tricky names to remember, especially since a majority of them were just made up words. (Looking at you, Dumbledore!) However, when it comes to the many various characters on Game of Thrones , there are some that even I have a hard time recalling from memory. And while that's partially due to the series' massive cast size, it's also because there are just so many storylines to try and keep track of. Which is why it's completely understandable if there are some Game of Thrones characters you totally forgot existed.

I mean, just think about all of the people these main characters have come across throughout the last five years? That's a lot of names to be expected to take in, so don't worry. Your forgetfulness is completely justified. However, there's always a chance they could become important somewhere down the line, which is why I've taken the liberty of listing some of the most likely characters who may have slipped your mind since meeting them. This way, if they were to suddenly reappear, you (unlike Jon Snow) would not know nothing.

He is the leader of the outlaw resistance group known as The Brotherhood Without Banners and firm believer in the Lord of Light. If you recall, Arya came into contact with him a few years back and witnessed his failed attempt at killing The Hound. And while he himself appeared to die, it didn't end up sticking. Thanks to the Lord of Light's powers of resurrection, he was able to be revived, which is what many believe will happen to Jon Snow. (Fingers crossed!)

Known as a red priest of the Lord of Light, Thoros is the one who healed Beric after The Hound killed him. I wonder what he's been up to (or who he's healed) since then?

Edmure and Brynden are Catelyn Stark's brother and uncle, respectively. Shortly after Edmure wed one of Walder Frey's daughters, he went sent to the dungeon as the horrific events of the Red Wedding unfolded. (A preferable option considering what happened to the rest of the guests.) Meanwhile, Brynden, who was also at the wedding, managed to escape, which strongly indicates we may be seeing him in the near future, looking to exact revenge. If you ask me, Walder Frey has gone far too long without facing retribution for his evil crimes.

5. Quaithe Of The Shadow

Yeah, remember this awesome lady? Aside from her unique wardrobe choices, this mysterious woman was the one who helped Jorah discover who had stolen Dany's dragons. She also seemed to posses both prophetic and clairvoyant powers. Let's run into her again, shall we?

Mott was the main blacksmith in King's Landing and served as Gendry's guardian before he shipped him off to join the Night's Watch in an attempt to save him from the upcoming slaughter of King Robert's bastard children. Mott was later tortured into revealing Gendry's whereabouts in Season 2, but hasn't been seen since.

Known to many as The Greatjon, he is one of the few bannerman of House Stark that remains alive and well since he was not an attendee of the Red Wedding. He is a great warrior and aside from having a brief run-in with Robb's direwolf, Grey Wind, he's remained a loyal ally to the Starks, fingers and all.

It's because of this guy that the Battle of the Blackwater was so successful. As head of the Alchemist Guild in King's Landing, Hallyne used his pyro talents to stockpile wildfire so that it could be used as a weapon against Stannis' army. And boy oh boy did it work like gangbusters.

You don't want to mess with this guy when you're trapped in the Eyrie's sky cells, which is something Tyrion came to learn the hard way back in Season 1. I wonder if he's still there even in the wake of Lysa's death or if he's found employment elsewhere. He sure does seem to enjoy hitting people with that little club of his, so there's one thing that could go on the old resume.

Shagga was the leader of the Stone Crows, who tried to rob and take Tyrion captive after he was released from the Eyrie. However, after being promised weapons and gold, Shagga decided to align himself with the Lannisters at least for the time being so that he could make sure their debt was carried out. Which, of course, it was. (I hear Lannisters have a thing about settling their debts.)

As a huge supporter of the House Targaryen I'm surprised we haven't seen more of this character throughout the seasons. He is, after all, the one who arranged for Dany to marry Khal Drogo and gifted her with the three dragon eggs. Oh, and let's not forget it was his house Varys and Tyrion temporarily stayed at in Pentos after crossing the Narrow Sea in Season 5, though he himself was not shown. Perhaps he'll have a bigger role to play in Season 6.

Where is Arya's direwolf these days? Ever since she bit Joffrey in Season 1, we haven't seen hide nor hair of that adorably loyal animal. I have to believe she's still alive, though, somewhere in the Riverlands and will eventually show up when she's needed most. Arya could use a seeing eye dog at the moment, so now would be as good a time as any. Plus, who doesn't want to see that face?

And now our lesson has ended…