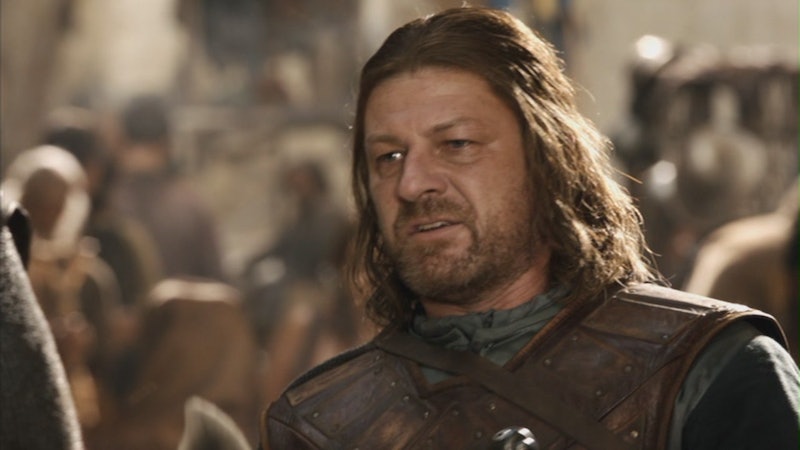 No character on Game of Thrones was more honorable than Eddard Stark. It was almost obnoxious, at times, how steadfast he was in protecting his principles and integrity. That said, it is because of Ned's words that I am certain that Jon Snow is still alive. If you believe in the the R + L = J theory like I do, then you believe that Jon Snow is not really Ned Stark's bastard son. Instead, Jon is actually Ned's nephew, born of his sister Lyanna Stark and Daenerys Targaryen's older bother, Prince Rhaegar Targaryen. According to this theory, Ned promised Lyanna on her death bed that he would protect Jon, and raise him as his own at the expense of his honor. Until his death, this was the one thing that Ned ever did to tarnish his reputation.

Though Ned has been dead since the end of the first season of Game of Thrones, his words provide us with some extremely important clues having to do with Jon Snow's future. And his quotes aren't the only hints at Jon's eventual resurrection. His actions consistently showed his strong desire to protect not only Jon, but the legacy of the Iron Throne as a whole. Jon Snow may know nothing, but Ned Stark knew a great deal.

Jon Snow's "death" was pitiful at best. Olly and the Night's Watchmen who executed him were furious that he made an alliance with their Wildling enemies. Because of this, they stabbed Jon and left him to bleed to death in the snow. However, they never actually checked to see if Jon was really dead. Perhaps they just assumed he was dead because that's what they wanted to believe.

It's true that Northerners must prepare more than anyone else for the long icy cold years that hit Westeros. However, "Winter is Coming" is also the motto of House Stark. It serves as a warning that something big is going to happen, something beyond their control. Something like a Targaryen resurrection. Though the characters in Game of Thrones may have been taking Ned Stark literally, they probably should have been looking at his words as a warning.

3. "There's great honor in serving the Night's Watch. The Starks have manned the Wall for thousands of years, and you are a Stark. You may not have my name, but you have my blood."

Aside from Ned's wife Catelyn, Jon had a great relationship with all of the other Starks, and he loved Winterfell. This suggests to me that Ned sent Jon to the Wall in order to protect him. The fact that Ned speaks about Jon having his blood is further evidence for the R + L = J theory. Taking a look back at the first season of Game of Thrones, it appears that Ned knew a lot more about Jon and his legacy then we could have ever guessed.

4. "The winters are hard but the Starks will endure. We always have."

As I stated previously, winter is a major concern for Ned Stark. Personally, I could not imagine living in subzero temperatures for years on end; it sounds unbelievably miserable. However, with this quote, Ned suggests that the Starks have always endured the winter. Though Ned, Cateyln, Robb and Talisa are long gone, Jon was stabbed at the beginning of winter, which could very well mean that he could still endure.

5. "The next time we see each other, we'll talk about your mother. I promise."

Before his untimely death, it looked as if Ned fully intended to tell Jon about his true parentage. Had he known the truth, I'm certain that Jon Snow might have went about things differently as Lord Commander of the Night's Watch.

6. "You think my life is some precious thing to me? That I would trade my honor for a few more years ... of what? You grew up with actors. You learned their craft and you learnt it well. But I grew up with soldiers. I learned to die a long time ago."

Jon Snow is probably more like Ned than any of the Starks. Because of this, when he's stabbed by his brothers in black, he looks them in the eye. Like Ned, he has learned to die. What is interesting at that moment is the fact that Jon does not look entirely shocked by his demise. He's only surprised when Olly steps forward to drive the knife into his body. Perhaps Jon is calm because, like his father, he doesn't see his life as precious. Or, even more, he can sense that his legacy is greater than a mortal life.

7. “When the snows fall and the white winds blow, the lone wolf dies but the pack survives."

During season one, Ned chats with his youngest daughter, Arya, about some of the horrible things that they've had to deal with since arriving at King's Landing. He talks to her about the Stark House and about direwolves. This quote suggests that a mortal death doesn't actually mean death. Since Jon was stabbed as the snow fell, and the winds were blowing, his resurrection could be imminent. And maybe, just maybe, Ned Stark knew that before anyone else.