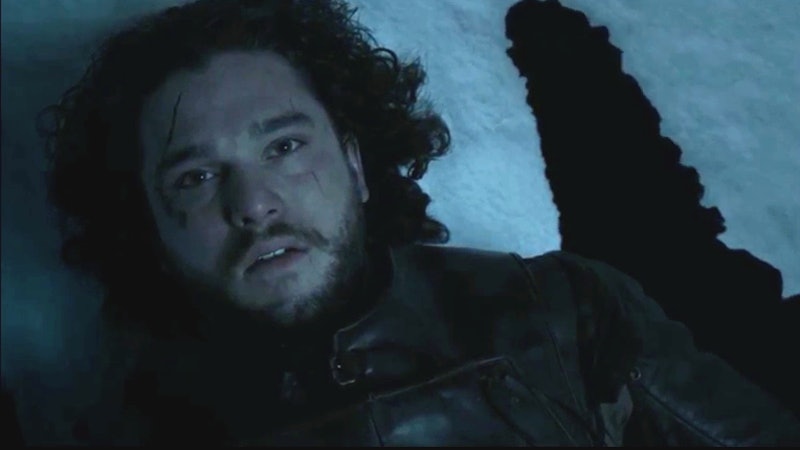 I know, I get it — you haven't been able to pull yourself out of bed for days, after that devastating Game of Thrones Season 5 finale. And who can blame you? Right when Jon Snow seemed like he might be the only Stark offspring to defy the family odds and find his way to a positive storyline, he goes and gets himself killed. And in the final episode, no less, so we have to wait almost an entire year to find out what happens to him. And as if that weren't bad enough, there isn't even solace for the book-readers, because the series is passing the texts now, so we're all hanging off this cliff together. But before you roll over and slip back into a depressed sleep, you should know that the word on the street is that Jon Snow will be resurrected. Sure, the guy who's playing him, Kit Harrington, has said he's leaving Game of Thrones for good, but if there's one thing this show has taught us, it's to trust no one.

Instead, you should trust your gut, and since mine tells me that we haven't seen the last of the Bastard, I'm turning to the Internet to help inform that instinct. And lucky for me (and you! and everybody!) there's a host of brilliant theories about Jon Snow's theoretical resurrection just waiting to be unearthed and help you start breathing easier. I decided to rank them in order of believability from, "Hey! It could happen" to "Noooo!! Don't let it be!"

This one hinges pretty heavily on the R + L = J theory, so if you aren't caught up on that and don't wish to be, you should skip past this one. But the gist of it is that Jon Snow isn't Ned Stark's bastard after all; he's actually the son of Ned's sister Lyanna Stark and Rhaegar Targaryen, which would put him in pretty great position to be the Lord's Chosen One, the hero who returns to save the world from the White Walkers. From ancient prophecies, we know that that person will be reborn with a "bleeding star" in the sky, amid salt and smoke, and with the blood of the dragon. The Targaryen theory would take care of the dragon's blood part, and the rest of it is pretty well covered too: the man whose death catalyzed Snow's had a star sigil, so that the bleeding star, Olly, had tears on his cheeks — that's the salt. And it was so cold that Snow's wounds steamed, so there's your smoke.

All we need to know now is that Targaryens don't burn — remember what happened to Daenerys when she walked into the flames? She walked right out unscathed, reborn as the Mother of Dragons. And since dead bodies left unattended join the Army of the Dead, you better believe the men of the Night's Watch are gonna throw Snow on a funeral pyre... which could ironically be exactly what he needs to be brought back to life!

Believability Factor: 8 out of 10. The show has left us a ton of clues that this is the way they go, and they're not usually ones to leave loose ends lying around.

2. He Becomes A White Walker

Hear me out here, because this isn't the worst thing or the craziest guess! Remember how interested The Night's King was in Snow and his sword? That suggested to me that he knows who Snow is, and it's someone important, so it seems unlikely his storyline is completely over. Instead, what if Snow became the leader of the White Walkers, and was able to either fight them from within or undermine the cause some other way? Or even join them, so he and Dany were on opposite sides! Talk about a song of ice and fire!

Believability Factor: 7 out of 10. You know the people behind the show would be chomping at the bit to show us an entirely new world that we haven't seen in the books, and this would be their first and best opportunity.

3. Melisandre Brings Him Back

As you may recall, Thoros of Myr repeatedly brought Beric Dondarrion back from the dead, drawing upon the same powers of the Lord of Light that are presumably available to another of his subjects... a badass priestess named Melisandre. Maybe you've heard of her??

Believability Factor: 5 out of 10. We've already seen one person brought back this way, so having it repeat might be a little boring, a factor that the show definitely considers.

4. He Wargs Into Ghost

There have been a lot of references in the books to the fact that wargs can keep themselves alive even when their human bodies die by taking shelter within one of the animals under their command. Snow and Ghost seem to have that bond, and it would explain why, when looking into the future, Melisandre saw Snow's face transform from man to direwolf to man and then back again. Plus, in the books, Snow's last word before he succumbs to his wounds is "Ghost."

Believability Factor: 3 out of 10. Producers didn't choose to replicate Snow's last words on the show, so it's likely that they have something else in mind. Doesn't take it out of the running for the books, though!

5. Jon Is Really Dead, Forever And Ever

Do not resurrect, do not collect $200. I'm not saying this would be my favorite theory ever, but it would be pretty brilliant, to get us all so invested in a character only to toss him away, leaving bloggers like me to write up all the most brilliant fan theories for nothing? Respect.

Believability Factor: 1 out of 10. Oh god please don't let it be true.