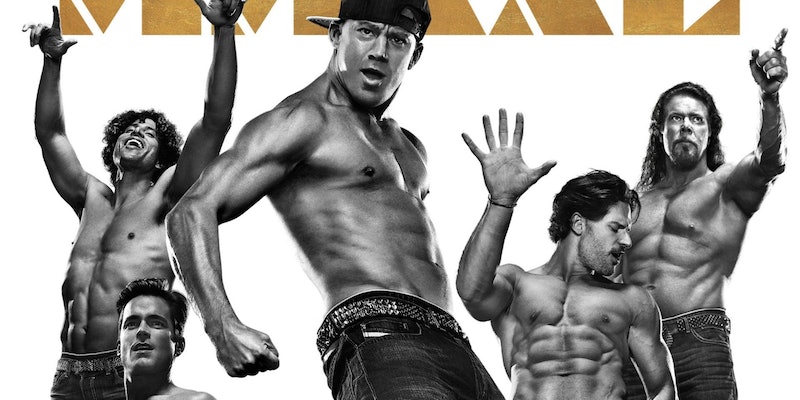 We need to talk about the new Magic Mike movie, you guys. By that, I don't just mean freaking out together over Channing Tatum's abs or swooning over Joe Manganiello's dance scene (although those are certainly worth discussing at another time, don't get me wrong). We need to talk about that finale. The stripping, the singing, the potential fro-yo truck buying: the Magic Mike XXL ending was filled with major events, and while it answered plenty of big questions, it left way more up in the air.

Seriously, a lot went down in those last few minutes of the movie (spoilers ahead). Some of the stuff was expected — that massive performance, the reappearance of Zoe — but others came as total surprises (what, no kiss?!). All of that information would be a lot to process for any movie, but for one that spent most of its two hours showing viewers the dancing, singing, and stripping abilities of half-naked men? It's more than understandable if you're still having a lot of trouble wrapping your mind around everything that went down. To make it easier, let's break down the ending of Magic Mike XXL step by beautiful step:

You can't have missed this part: in the main part of the finale, the group competed in the stripper convention to an audience of screaming thousands. It's safe to say their act went over fairly well.

In one of several run-ins through the film, Zoe appeared at the convention, and even (reluctantly) took part in Mike's on-stage act.

But Mike And Zoe Did Not Kiss

Surprisingly, nothing actually happened between the pair, unless you count Mike putting his crotch in her face a bunch of times. They exchanged a few meaningful looks, but didn't actually hook up.

And celebrated their night under fireworks. It was very sweet.

Tito Got His Fro-Yo Truck

Or at least drove around in it for a bit.

Well, sort of. Mike, at least, seemed like he'd finally got the last need to strip out of his system, and that he'd be back in a more "regular" job soon enough. As long as it still allowed him to take the occasional "Pony" break, of course. As for the others, they seemed truly happy with how they'd handled their last big hurrah as a group, so perhaps the night signaled an end to stripping for them, too. Or excuse me — male entertaining. These guys deserve all the credit.

Like, suddenly. Very suddenly. Was it simply meant to give a serious conclusion to the events of the movie, or was it more about getting viewers amped for Magic Mike 3, if it ever happens? Either way, it worked.

Got all that? Look, Magic Mike XXL is not exactly a confusing movie — but you'd be forgiven for being distracted by thongs and paintbrushes and not paying much attention to how it all ended.