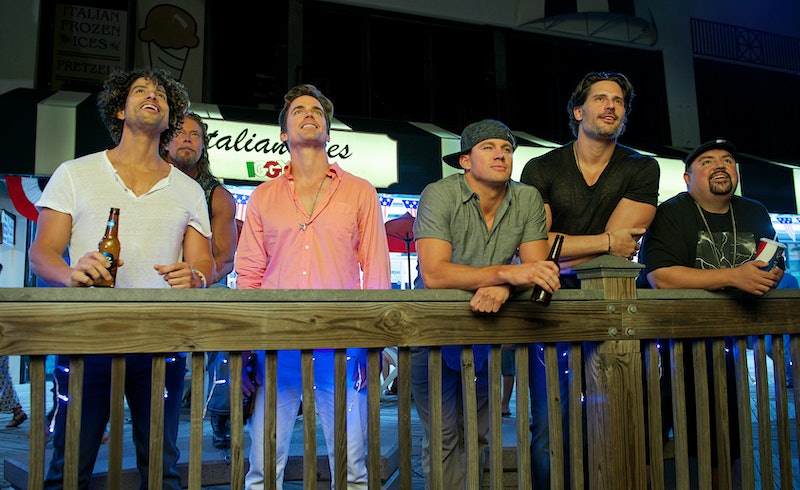 When Magic Mike came out in 2012, practically no one expected that it would be a monster of a hit that would resonate with people as much as it did. The doubt wasn't just because of all the abs and gratuitous male nudity, but because it was a fun and surprisingly thoughtful movie about male stripping. It was a very cheeky (no pun intended) hybrid of Boogie Nights and Showgirls, and audiences ate every minute up. And because the movie gods are great, fans got a sequel — an extra large one. An extra, extra large one. Magic Mike XXL totally delivered— except for the part where there were all those loose ends in the finale. There needs to be a Magic Mike 3 , please!

Really, Magic Mike has no choice to be a trilogy. It needs that third installment not just because the world demands it, but because some of those dangling storylines need to be resolved. The movie-going public deserves it, especially after watching the end of Magic Mike XXL. Although the movie left us with few complaints, (because everyone knows there's never enough of Channing Tatum bumping and grinding to “Pony” by Ginuwine), there were far too many unfinished plotlines that demand to be resolved in a third one. Hell, if the movie was just 90 minutes of Tatum, Joe Manganiello, Matt Bomer and the other “Kings of Tampa” talking about politics while shirtless, it would probably make a quadrillion dollars, but if it can tie up those loose ends, it'd be a definite must-see. Here's why the world needs Magic Mike 3 (spoilers ahead!):

1. Mike And Zoe Never Got Together

The end of the movie saw Mike win Zoe's (Amber Heard) heart with an epic lap dance, and it is assumed that the two of them get together at the end, but it's not actually seen. It would be nice to see Mike get some love that doesn't involve dollar bills down his pants.

Richie has the blessing and a curse of having a big — er — "member" that women seem to be intimidated by. That is, until he meets the southern belle and divorcee Nancy (Andie MacDowell). They hit it off well. Really well. The two have an intimate night together, and they seem to have a genuine connection. It would be nice to see BDR settle down.

3. Ken Must Get His Big Break

His pretty face, odd ways and heart of gold has taken him far in the stripping world, but his acting career has been at a standstill. They touch on it in the sequel, but it would be quite a treat to see Ken get his big break. That would certainly be a spectacle.

4. Tito Has To Grow His Business

If his frozen yogurt is as tasty as it is portrayed in the movie, then a movie needs to show him becoming the next Pinkberry mogul.

5. Paris Should Get The Spotlight

Elizabeth Banks' screen time as the stripper convention organizer, Paris, was great, but far too short. It echoed her role as the unfiltered a capella commentator Gail in Pitch Perfect. Plus, fans need a dive deep into her relationship with Rome (Jada Pinkett Smith). What was that all about?

Rome's palatial mansion of male entertainment deserves more attention. In addition to learning more about Andre's (Donald Glover) budding singing career and Malik (Stephen "tWitch" Ross), the exclusive strip club has a lot of nooks and crannies that need to be uncovered. For one, can fans get some early footage of Mike as "White Chocolate?" And then there's the hunky Augustus (Michael Strahan). What's his story?

There is plenty of reason for Magic Mike to become full-blown trilogy and be what fans always knew it could be: the Star Wars of male stripper movies.