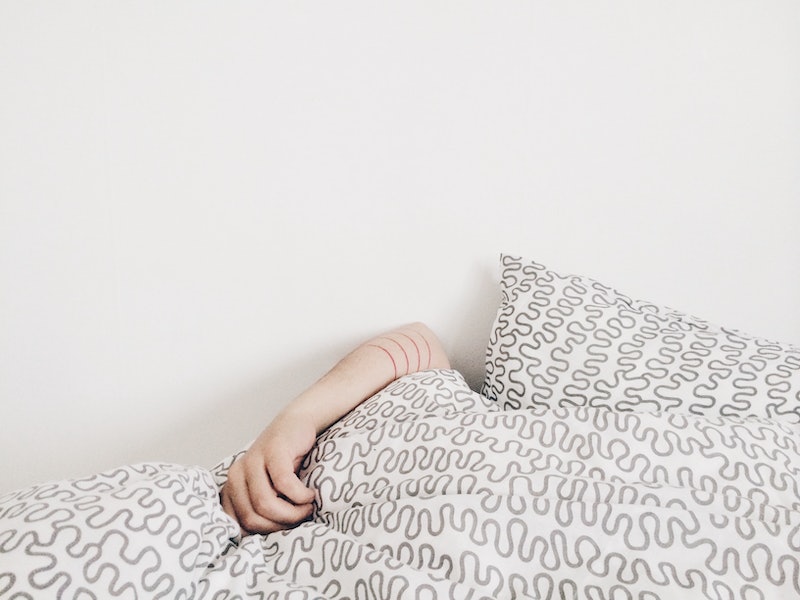 Pop quiz, hot shot: what's the ideal amount of sleep needed each night to ensure your health, longevity and happiness? If you're like most people, you probably said, "As many hours as humanly possible" (particularly if you've recently been woken up in the middle of the night by some drunk guy singing "Master of Puppets" on the sidewalk in front of your house). And for a long time, conventional wisdom was right there with you: sleep's health benefits are well-known, and so people believed that the more of it you got, the better your health.

But a lot of recent research has contradicted that long-held assumption, raising some surprising questions. Is sleep like a wedding reception buffet, where the whole idea is to grab as much as possible and totally gorge, as so many of us have assumed? Or can sleep actually be better for us when we get less of it? A number of studies have suggested that a wide variety of sleeping habits beyond the standard "eight hours" are actually perfectly healthy. These studies have also suggested that getting too much sleep, rather than being a cure-all, could actually be correlated to living a shorter life.

If we hit a certain number of hours of sleep, will we gain health, vitality, longevity, and possibly the same eerie superpowers you got when you ate one of those fire flowers in the original Super Mario Bros.? Probably not (though if we find something out about the fire flower thingie, you'll be the first to know, I promise). But the hours of sleep that you typically log do come with specific risks and rewards. Read on, and try not to lose sleep over what your sleep number says about your health.

Whoa, tiger! Where are you getting the free time to sleep for nearly half the day? I either really envy you, or totally don't envy you. Either way, your sleep-heavy lifestyle might just mean that you're supremely relaxed, but it could also point to health problems. Talk to your doctor if you find yourself regularly sleeping more than nine hours a night: people who chronically oversleep often suffer from other health issues, like sleep apnea or depression, which can often lead to a shorter lifespan if left untreated.

Eight hours plus a little extra sounds like the mid-level luxury car of sleep times — you get everything you need, plus a little extra just for fun, right? I hate to burst your sleepy bubble, but a 2002 study of over one million Americans, led by Dr. Daniel Kripke at the University of California at San Diego, reported that people who slept eight-and-a-half hours daily had a 15 percent higher risk of death within the next six years than people who spent between six-and-a-half and seven-and-a-half hours in bed each night.

Eight hours! The platonic ideal of sleep, right? The gold standard! Not quite — that same 2002 sleep study noted that people who slept eight hours a night were 12 percent more likely to die within the next six years than people who spent between six-and-a-half and seven-and-a-half hours in bed each night, too. And in case you were not freaked out already: Shawn Youngstead, a professor at the College of Nursing and Health Innovation at Arizona State University Phoenix, told the Wall Street Journal, "Eight hours or more [of sleep each night] has consistently been shown to be hazardous."

Kripke, the author of the major 2002 sleep study, told Time, "We've all been told you ought to sleep 8 hours, but there was never any evidence." Oops.

Seven-and-a-half hour sleepers: have you spent a lifetime beating yourself up for never being able to quite make it through that final half-hour of rest, and achieve a "perfect" eight hours of sleep? Well, here's the good news: according to the 2002 University of California study, seven-and-a-half hours is actually the outer limit of healthy sleep times; eight hours is when things can start to get freaky. So pat yourself on the back — and do something cool with that extra half hour of waking time every day (no pressure, but they have all of Adventure Time on Hulu these days!)

All our lives, we've been told that 7 hours is the bottom of the barrel when it comes to getting a good night's rest — a state of affairs that has led to many a freak out when we look at a clock and realize we'll only be able to get seven hours of sleep if we fall asleep within the next 45 seconds. But relax, 7 hour energy balls — 7 hours is actually right in the middle of healthy sleep times, according to the 2002 study. See? You're not an underachiever at all! 7 hours is like a solid B+.

You're sick of me referencing that 2002 University of San Diego study by now, right? Well, tough pancakes: six-and-a-half hours represented the lower limit of healthy sleep times in that study, so if you always burst awake a half-hour before your alarm goes off, know that you are perfectly fine, and don't have to find a way to "make up the sleep."

At six hours, you're taking the highway to the danger zone, friend; you've fallen off the bottom level of healthy sleep levels charted by the 2002 study. Are you waking up after six hours naturally? If you're waking up on your own after six hours and feel good when you do, your body may only need six hours of sleep — roughly three percent of humans have a gene that makes them able to healthily function on only six hours of sleep. But if you're getting six hours because you're going to bed too late, or wake up a lot at night, try some sleep hygiene tips or talk to a sleep specialist — undersleeping on the regular can wear you down quickly.

According to a 2007 article in the San Francisco Chronicle, people who slept less than six hours a night had a 70 percent higher risk of death than their peers who were sleeping seven to eight hours a night. And this isn't just due to chronic illnesses, like hypertension, diabetes, and heart disease, that are tied to undersleeping; people who are always sleepy tend to get into more accidents, some of which end up being fatal or having consequences that shorten their overall lifespans.

If you just can't seem to get more than five-and-a-half hours, Gregg Jacobs, Ph.D., of the University of Massachusetts, might provide a ray of hope: Jacobs theorized that quality, not quantity, of sleep is most important when it comes to longevity — and so while sleeping seven hours is ideal, sleeping for five and a half hours a night can still be healthy, according to his research.

But if you find yourself feeling exhausted after your five-and-a-half hour nights, don't just accept it —there are plenty of programs out there to help you sleep, which include everything from medication to talk therapy to hypnotherapy.

Holy Ambien, woman! What are you doing to yourself? Sure, there is a marginal chance that you are a so-called "super sleeper," a person who only needs a few hours of sleep a night. But considering that super sleepers only make up one to three percent of the population, let's get real: you're not a super sleeper. You're a regular sleeper who is making some very bad calls when it comes to your bedtime.

That pesky old 2002 study found that people who habitually slept less that four hours a night had a 15 percent higher risk of death than their peers who slept more. And as noted above, chronic sleep deprivation leads to a vast array of health problems, from diabetes to heart disease. Being tired all the time can also lead to chronic low-grade inflammation, which is linked to health problems from cancer to cardiovascular disease.

So what can we do for you, my tired friend? If you're undersleeping because you battle insomnia, I feel for ya; and you'll be happy to know that the 2002 study did not tie frequent insomnia to increased risk of death —rather, subjects who purposely didn't sleep enough were the ones in danger.

So while no one should have to live with insomnia, know that just being awake for 20 hours a day won't necessarily drop you on death's door — but forcing yourself to live on such little sleep may. So if it's possible, cut any corners to get more shut-eye. Can you adjust your hours at work? Move closer to your job to shorten your commute? Drop a class from your course load? Seriously. Getting enough sleep is that important.

What Does It All Actually Mean?

Now, this 2002 study isn't infallible: in fact, it was criticized for not charting whether the people sleeping late or rising early were already suffering from chronic illnesses which caused their unusual sleep patterns, and could have also shortened their lives. So sometimes, our weird sleep patterns are the symptom, not the cause, of our health problems.

But either way, it can't hurt to take your sleep habits seriously. The number of hours you sleep doesn't just relate to the number of waking hours you have every day to hang out with your friends, work or watch Netflix — it relates to your health for the rest of your life.