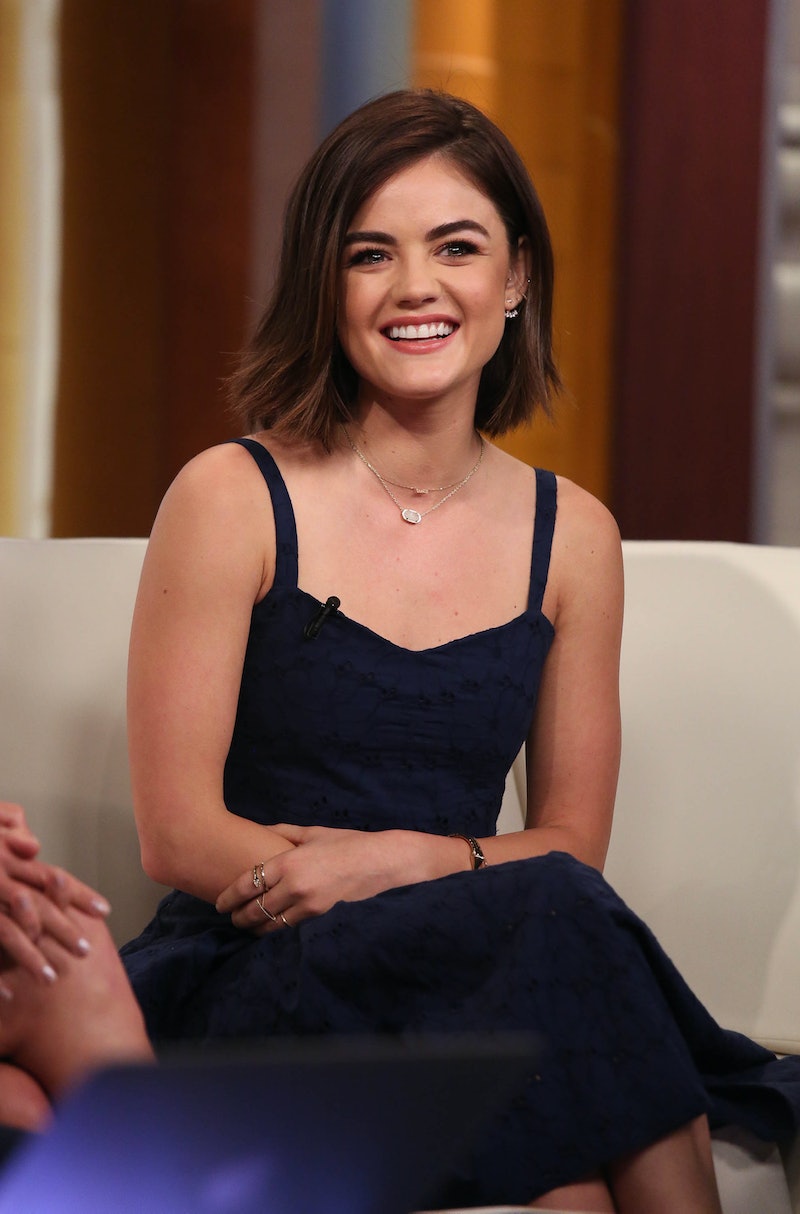 Uh oh. Ezra Fitz better watch out, because it looks like Pretty Little Liars actress Lucy Hale is dating Anthony Kalabretta — according to Us Weekly, that is. Ever since the PLL cast wrapped Season 6A, they are off enjoying summer and taking luxurious vacations, because, duh. The same goes for Hale, who was spotted with her rumored beau in Hawaii and shared some of her own photos on Instagram.

It looks like Hale, Kalabretta, the ABC Family star's BFF Annie Breiter, and another guy named Adam, are basking in the sun and having fun on the islands. According to a source who spoke with Us Weekly, "They [Hale and Kalabretta] met through mutual friends and bonded over a lot of things — just having fun and their shared love of music. She has a thing for musicians. They celebrated her birthday together with her friends. She's been happier than I've seen her for awhile, enjoying her hiatus from the show."

Us also reports the two were first see together at a June 18 Dodgers game. The dating rumors appear to be true, especially based on these lovey-dovey and playful photos captured of Hale and Kalabretta on the beach.

Whether they are or aren't a couple, I know one thing for sure: Hale's PLL character Aria Montgomery would probably be attracted to Kalabretta. Why's that? Well, let me tell you a little bit more about him and you be the judge.

Kalabretta is a talented musician, who's uploaded most of his work on Soundcloud. If you're into remix jams, then you'll love his stuff. Like the artsy person she is, Aria would love his creations.

He Chills With Inflatable Swans

Granted, he's not on the swan, but it's obvious he totally loves chilling in pools on inflatable swans. You know Aria would love to cruise around a pool on a swan too.

The "perfect Lucy?" *swoon* Definitely not like the creepy men who usually are attracted to Aria. No offense, Ezra.

He's Quite The Photographer

He Likes The Wedding Singer

It might not be up Aria's black and white movie alley, but, hey, I think he has good taste.

His Other Half Is Coffee

Do you think he visits The Brew?

Yep, totally Aria's type. For more on Hale's amazing character, plus everything else Pretty Little Liars, check out Bustle's podcast, "Taking This One To Grave."

More like this
Every Horror Movie Reference In The 'PLL: Original Sin' Premiere
By Alyssa Lapid
The 'PLL: Original Sin' Creators Say A’s Identity Will Be “Very Clear” By The Season Finale
By Alyssa Lapid
Who Is Camila Cabello Dating? She's Getting Cozy With Lox Club CEO Austin Kevitch
By Radhika Menon
Kim Kardashian & Pete Davidson’s Relationship Timeline From Start To Finish
By Jordyn Tilchen and Bustle Editors
Get Even More From Bustle — Sign Up For The Newsletter