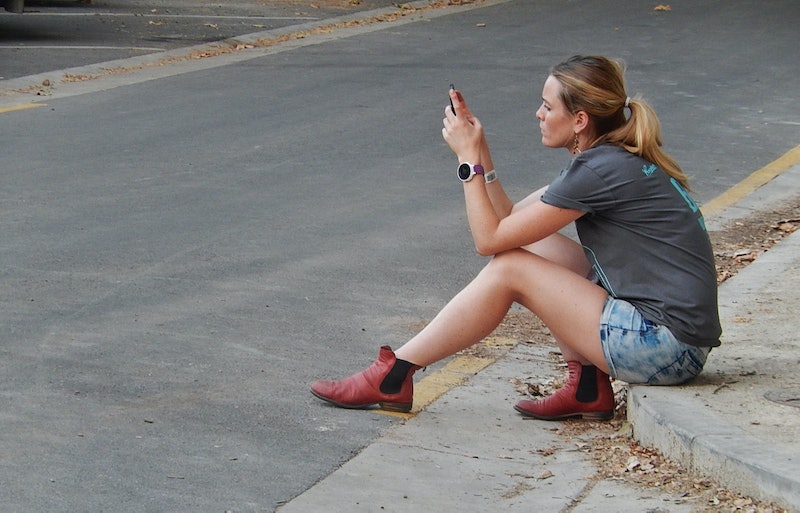 Jane Austen has a lot to teach us about romance, feminism, and generally how to be a badass, but her words of wisdom don’t end there. It turns out there’s also a lot to be learned from Austen about the modern world of online dating, if you know where to look. Sure, she never actually tried it — but that didn’t stop her from dropping some serious truth bombs about Tinder and OkCupid, when we stupidly thought she was just talking about ball gowns and rich people.

When it comes to getting a man, nobody does it better than Austen’s leading ladies. I recently set up online dating profiles for Austen’s main characters to try and learn some of their wily ways, and, sure enough, I got a marriage proposal within a fortnight. I have never managed to pull that off in real life.

Obviously, Jane Austen knows what she’s talking about when it comes to dating, and her advice for falling in love online is pretty bulletproof. So the next time someone tries to claim her books are outdated and old fashioned, you can prove them severely wrong. If Austen were alive today, her biting social commentary would have her hosting The Daily Show before Jon Stewart’s seat were even cold, and she’d have a thing or two to teach us all about Millennial romance, as well.

Keep Your Interaction Online for a While...

Several of Jane Austen’s heroines learned a hard lesson about falling in love: it’s super-easy to get swept away by a charming stranger, before realizing you don’t actually know the first thing about the person to whom you’ve just given your heart.

From the moment Mr. Willoughby appeared sexily in the rain, Marianne Dashwood was a goner, and the news that he was a scoundrel who wasted his money and abandoned pregnant women came too late to rescue her from a broken heart. Get to know each other through the safety of your laptops first, so you know what you’re getting before you dive into that exciting first date.

Catfishing is real! If a man as rotten as Mr. Wickham can make himself look good enough in real life to convince poor Lydia Bennet to run away with him, then anyone can lie on an Internet profile. As Austen’s cautionary tale warns, you don’t know who you’re dealing with out there. Don’t let anybody fool you for long; get up close and personal and check that this person really is who he or she says!

Don’t Judge Anyone by Their Pictures

Mr. Darcy thought Lizzy was “not handsome enough to tempt” him, and she turned out to be the love of his life. Looks aren’t everything, and (as Austen shows us) the more you fall in love with somebody, the more attractive you’ll find him or her, anyway.

By the end of Pride and Prejudice , Darcy is captivated by Lizzy’s “fine eyes.” So, if you’re not blown away by a potential partner’s profile picture at first sight, it doesn’t mean there won’t be fireworks later.

Don’t Judge People by Their Profiles, Either (Well, Not Too Much)

Setting up an online profile is really hard, and a lot of them come across as super-awkward. Don’t set your expectations too high for first impressions on a dating profile; there’s most likely a lot more to the person than he or she can initially convey. Marianne Dashwood was convinced nobody was worth her time if they weren’t young, passionate, and into all the same books and music as her, but she ended up falling head over heels for a man she initially thought was a “forlorn...old bachelor.”

It’s tempting to swipe through Tinder with your friends so you know you have their support, but, actually, online dating is a great excuse to get away from your matchmaking friends. Austen’s Emma is all the proof you need that allowing your friends to set you up will only ever end in trouble. If you like someone that your friends think isn’t good enough? Well, it’s none of their business.

Put Yourself On the Market

In Jane Austen’s books, the characters meet their future spouses at balls: a giant room of people all there explicitly to get lucky. Sounds a little like online dating, don’t you think? Back then, this “marketplace” approach to dating was considered rather vulgar by traditionalists who preferred to wait politely for a single young man or woman to chance upon them at church.

Things haven’t changed much: today, we are constantly advised to stop looking, and to wait patiently for the great love of our lives to randomly pop up in a coffee shop. (Fat chance.) Unfortunately, the stigma of online dating is still sticking around — but Jane Austen knows better.

After all, those who seek shall find.