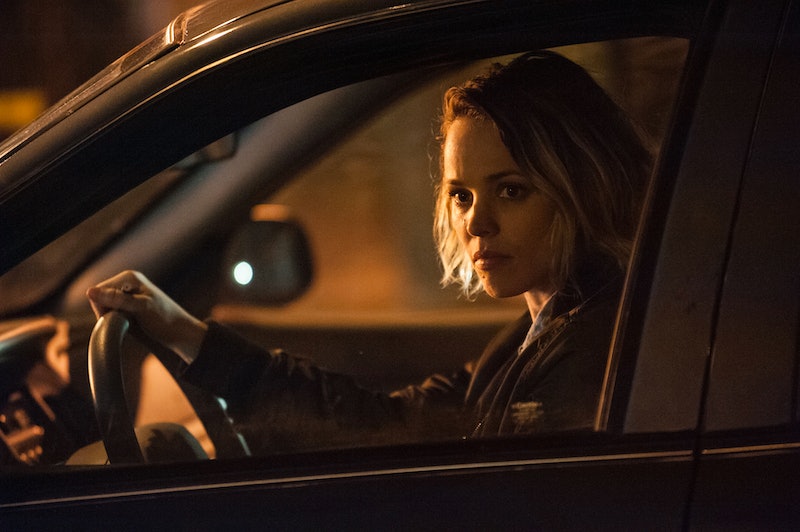 After a terrific, if disappointingly male-centric, first season of HBO's crime anthology, viewers were thrilled to see Rachel McAdams' name among the main cast for True Detective Season 2, even before we knew much about her character. Before the season began, we knew she would be playing a detective named Ani Bezzerides... but that was about it. In the Season 2 premiere, "The Western Book Of The Dead," we got several hints at a fascinating backstory for Ani, including a childhood spent on a hippie commune, a guru for a father... and the fact that her full name is actually Antigone. Now that's a weird name, even for True Detective. What does "Antigone" mean, and what can it tell us about McAdams' character?

Let's start with the literal definition of the name. "Antigone" comes from the greek words "anti," meaning "against," and "gone," meaning "birth." So Antigone is literally "against birth." That makes a lot of sense for someone so estranged from the rest of her family. Ani had to literally remove herself from her birthplace in order to make something of her life. Now, those of you who remember the semester you spent studying Greek tragedies in high school will recognize Antigone as the title character in a famous play by Sophocles.

The final entry in the 10th century playwright's "Three Theban Plays" trilogy (following Oedipus The King and Oedipus At Colonus), Antigone tells the story of Oedipus' daughter, who defies royal decree to bury the body of her brother, Polyneices, slain while leading a civil war. Creon, the King of Thebes, decrees that Polyneices' body be left to rot in the street, and Antigone is arrested and sentenced by Creon to be buried alive when she performs funeral rites for the corpse against his wishes. Antigone dies; her lover, Creon's son Haemon, kills himself; then Creon's wife, Eurydice, kills herself. You know, typical Greek happy ending.

So what does all this mean for Ani Bezzerides? Well, for one, she likely won't have a happy ending... but this is True Detective so you didn't really need me to tell you that. But on a deeper level, Ani has a lot in common with her namesake. No, she's not running around defying royal decrees and burying dead brothers. But she and Sophocles' Antigone share a hot streak of stubbornness that defines both of their personalities. Both women are extremely strong-willed, refusing to cater to the whims of the patriarchy, represented in Antigone by Creon and his decrees and in True Detective by the widespread corruption of the likes of Frank Semyon and Ray Velcoro.

But it's also interesting to note the ways in which Antigone and Ani are drastically different. One of the major themes of Sophocles' play is civil disobedience. Antigone literally ignores the law to do what she thinks is right. In the two episodes of True Detective we've seen so far, Ani seems like a pretty by-the-book detective; it will be interesting to see if and when she decides it's OK to start breaking the law... and what drives her to that point. Another difference is that Antigone is primarily motivated by an unshakable devotion to her family; she accepts death as an acceptable consequence for burying her dead brother's corpse. It's hard to imagine Ani laying down her life for her father. Her sister, maybe; despite her disapproval of Athena's career in pornography. Antigone would likely do anything to protect her younger sibling.

Speaking of Ani's sister (played by Leven Rambin), Athena's name also comes from ancient Greek mythology. (Her dad clearly had a "thing" for the figures.) Athena was the goddess of wisdom, civilization, and the arts — rather appropriate for someone who became a performer, don't you think?

But Ani and Athena aren't the only characters we've met in the first two episodes who have a connection to the ancient Greeks. As Bustle's own Allison Piwowarski pointed out, Caspere's killer is seen in possession of an incredibly creepy raven mask — the same mask he's wearing when he shoots Ray at the end of the second episode — and that the raven is a symbol often associated with the Greek god Apollo.

Apollo was the god of music, truth, and (ironically) healing. According to myth, he sent a white raven to spy on his lover Coronis, and when it informed him that she'd taken another lover, he turned it black as a punishment for spreading lies. But when he found out it was, in fact, telling the truth, he rewarded the crow by making it the sacred harbinger of death... and then killed Coronis out of spite. (Nice guy.)

You know what's interesting about Apollo and Athena? They both have the same father: Zeus. (While Apollo and his twin sister Artemis were the children of Zeus and Leto, Athena was said to have no mother, but rather she sprang fully-armored directly from Zeus's forehead.) Could all of this Greek symbolism actually be a hint to the killer's identity? Crazy theory time! The man behind the raven mask is a third Bezzerides sibling. Eventually we'll learn that Ani and Athena have another estranged family member — a long-lost brother — who will turn out to be the culprit behind the recent spate of violence.

Whoever the killer turns out to be, we can definitely to expect True Detective Season 2 to end, not with the surprising optimism of Season 1, but with a bloody climax straight out of Greek tragedy.

More like this
'The Summer I Turned Pretty' Book Ending Is An Emotional Rollercoaster
By K.W. Colyard
The Future Of 'All Creatures Great & Small' Is Confirmed & Wedding Bells Are Ringing
By Rebecca Fearn and Frances Stewart
A New Season Of The Midwich Cuckoos Could Be Coming “To A Town Near You”
By El Hunt
At 14, Jenny Han Wrote Rom-Coms About Her Friends & Fan Mail To Leo DiCaprio
By Alyssa Lapid
Get Even More From Bustle — Sign Up For The Newsletter