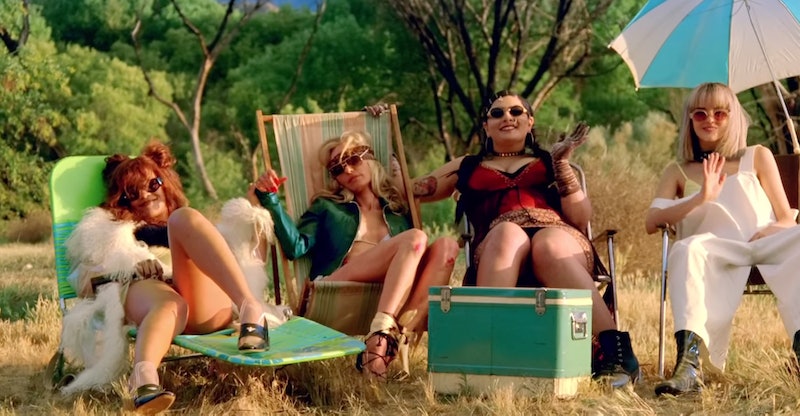 For a reason I cannot explain, I have always been a little intimidated (read: terrified) of Rihanna, and her music video for "Bitch Better Have My Money" didn't help matters much. I realize she was just playing a character, but I fully expect to have nightmares where Rihanna hangs me upside down from a warehouse ceiling — and chances are, her scary (but hot) henchwomen will be there too. Although Rihanna announced a few days ago that Sita Abellan would be in the video, I have a few questions about her other accomplice... mainly, who is she? The answer to that one was pretty hard to find, so I put on my Nancy Drew hat and got to work. As it turns out, Rihanna's right hand woman in "Bitch Better Have My Money" is Sanam... and that's about all I know about her.

Like Madonna, Sanam seems to only have a first name, and the reason I even know that her name is Sanam is thanks to a comment left on her Instagram, where one of her followers was freaking out that they spotted her in the video. And Sanam must be pretty popular, because RiRi fans all over Twitter are excited about her appearance, too.

And being that Sanam doesn't have a last name — well, she probably has one, I just don't know what it is — she was hard to investigate. But thanks to Twitter and her Instagram account, I was able to put a few clues together.

She might have started out as a Rihanna fan

At least, judging by how excited she was when Rihanna followed her. But let's be real: We'd all be excited if Rihanna followed us. Maybe not after this music video, though, because I'd be more convinced she was plotting to stuff me into a box and steal my dog.

Everyone is freaking out that she's in this video

Can we talk about this? Her eyeliner is constantly on point.

As this Rihanna fan explains, it sounds like Sanam got bullied off of Twitter, which is why she doesn't have an account, so Rihanna found her on Instagram instead and asked her to be in the video. If this is the legit story, I love it. Maybe Rihanna isn't as scary as I think she is after all, especially if she's willing to go out on a limb for a fan that way.

She and Rihanna are now besties

And she's an ultra feminist

Her Instagram features some of her artistic talent with drawings with an awesome feminist messages, and she challenges beauty norms at every opportunity. Her confidence comes through her Instagram posts. Guys, this is one cool girl. No wonder Rihanna loves her.

Sanam, whoever you are, I already love you. Let's be BFF?